Cambridge: See university city, get a workout on punt 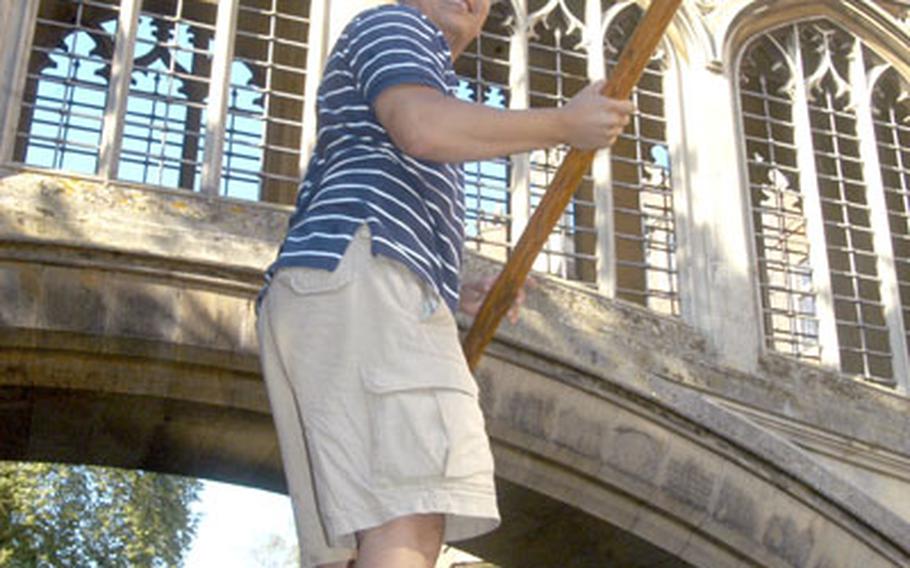 A punt floats along the River Cam past King’s College Chapel in Cambridge. (Sean Kimmons / S&S) CAMBRIDGE &mdash; On a recent warm afternoon, I decided to partake in a popular attraction in this historic city that can be both relaxing and a little strenuous.

Punting allows visitors to see the sights of Cambridge while floating on the River Cam. The river is shallow and flows around the north and west sides of Cambridge&rsquo;s city center area, where many stunning architectural highlights and parks are located.

My group headed to a punting shop in the north side, near the Magdalene Bridge. Narrow, flat-bottomed wooden boats &mdash; punts &mdash; could be seen gliding under the bridge, carrying groups both young and old.

We rented one of the smaller punts, which was able to hold all five members of the group. Before we embarked on our journey, though, we stepped into a nearby liquor store to purchase some drinks. The store carried numerous bottles of wine and also single bottles of beer.

With our supplies in the punt, we shipped off down the river toward the Backs, where the backs of some famous colleges can be seen, such as St. John&rsquo;s, Trinity and King&rsquo;s &mdash; all founded in the 15th or 16th centuries.

Along this route is perhaps one of the most famous buildings in the city, the King&rsquo;s College Chapel. Completed in 1547, this chapel is believed to have taken over a century to build.

On this afternoon, there was some punting traffic that we had to maneuver through on the way to the sights. The main person for this job stood in the rear of the punt, using a 10-foot wooden pole to push off against the bottom of the river to propel the punt and steer it in the right direction.

It can be a tiring experience for the one on pole duty, but for the rest of the group, it&rsquo;s a relaxing ride. At the punting shops, it is not uncommon for tour guides to haggle you for a more expensive price that includes having them at the helm.

But being in control of a punt is part of the experience, and should be tried at least once. Try not to get frustrated if you can&rsquo;t keep the punt straight. Unless you were a pro punter in a past life or are well coordinated now, it will take time to steer and thrust the punt forward where you want it to go.

One important rule to remember is if the pole gets stuck to the river floor and you can&rsquo;t twist it out, don&rsquo;t hold on to the pole or you&rsquo;ll be going for a swim. There should be a paddle in the punt, so you can maneuver back and grab the pole.

When we returned to the dock, we paid 14 pounds for each hour we were out on the water. Other punting locations can be found near the Silver Street Bridge, Jesus Green, Grantchester and Newnham Road. Some locations are cheaper than others.