Servers try to keep up with the thirst of beer aficionados inside a huge tent during the 33rd Cambridge Beer Festival. More than 200 beers, mostly local ale selections, were available during the week-long event. (Sean Kimmons / S&S)

Servers try to keep up with the thirst of beer aficionados inside a huge tent during the 33rd Cambridge Beer Festival. More than 200 beers, mostly local ale selections, were available during the week-long event. (Sean Kimmons / S&S) Hundreds of beer drinkers mingle during the Cambridge Beer Festival on May 24. (Sean Kimmons / S&S) 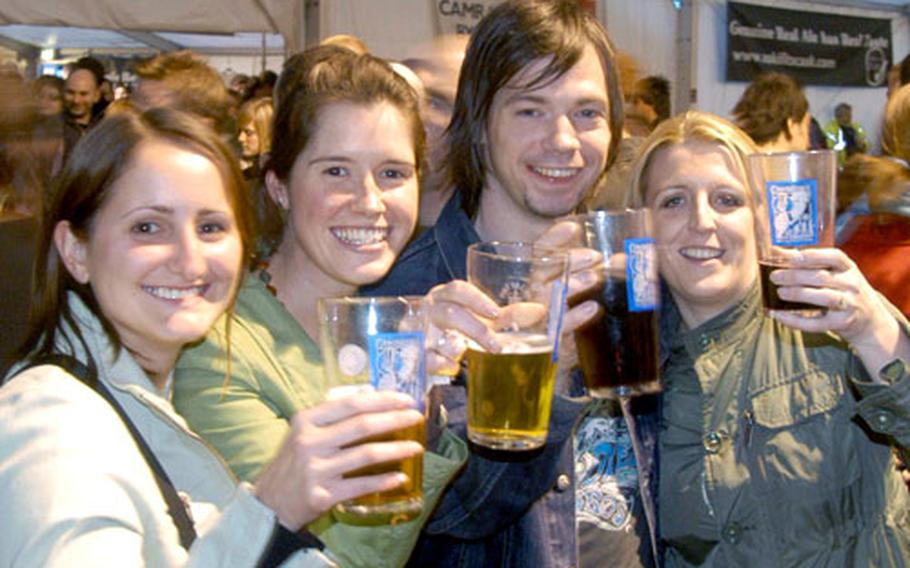 Beer enthusiasts raise their glasses during the festival at Cambridge. (Sean Kimmons / S&S) 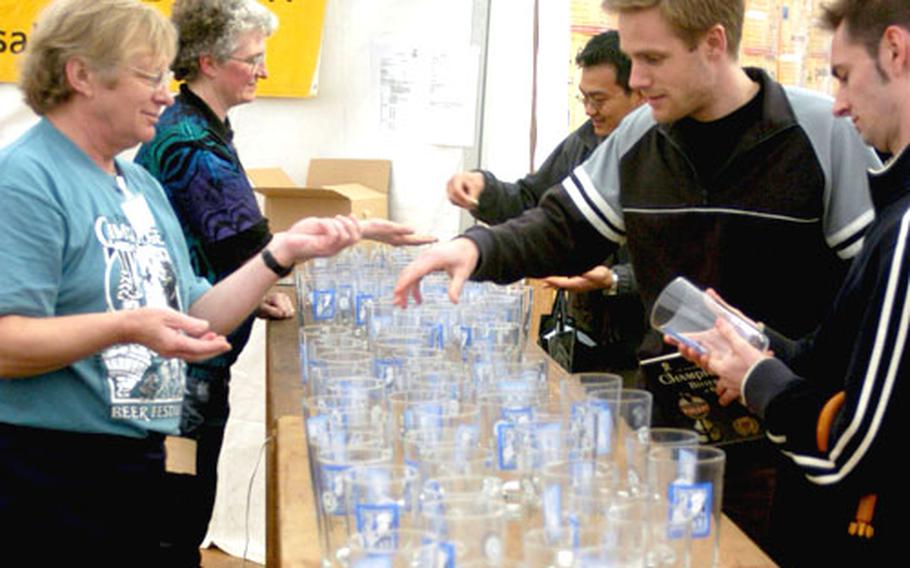 CAMBRIDGE &mdash; The guy wobbled a little and his soupy, dense ale wavered near the rim of his pint glass for a moment. Then he steadied himself before he spoke.

He&rsquo;d been extolling the virtues of a beer called Old Tom, with 8.5 percent alcohol content, over the course of the evening at the 33rd Cambridge Beer Festival.

Standing with an ale in his hand, he actually looked relatively sober. But when he said &ldquo;I&rsquo;m toasted&rdquo; to no one in particular, it became clear that maybe looks can be deceiving.

It can be hard to tell in the atmosphere of a crowded beer festival, where many have sampled drinks stronger than your average Molson. The slightly boozy ambience is part of the fun of a beer festival, an event that becomes a summer fixture around many U.S. bases in the United Kingdom.

For those interested in an alternative to a night of Carlsberg lagers down at the old Fox and Hounds, it&rsquo;s a great way to get out and meet some people. Patrons at the festival said it&rsquo;s also a place to acquire a taste for that most challenging of beverages, bitter British ale.

&ldquo;It&rsquo;s different from going to a pub, ain&rsquo;t it?&rdquo; said Cambridge local Shane Hills, who was there to meet friends from his touch rugby club.

Most pubs carry just one or two beers at a time, said Gary Maklin, who&rsquo;d tried 39 by day three of the five-day festival.

At the Cambridge event, one of the biggest in the region each spring, there was certainly no shortage of options. More than 170 authentic ales were on tap under the giant white tents of the event, sponsored by the local Campaign for Real Ales chapter, along with 60 other beers, ciders, wines and varieties of mead.

Lisa Brackenbury, from Cambridge, said she doesn&rsquo;t normally like ale but had found a favorite in Whitstable Raspberry Wheat, which she called &ldquo;girlie&rdquo; and stuck to exclusively on Wednesday night.

Like any good ale festival, the Cambridge event boasted beers with a creative assortment of names and tastes, including some requiring a durable palate.

The menu sported beers called Pressed Rat & Warthog, the Village Bike, Pigswill and Whistlebelly Vengeance. Tastes ran to the extreme in the selections such as Dandelion and Burdock (which tasted like dandelions) and Bananatana, a blend of banana and raisin flavors.

The Irish beer Headless Dog featured floating chunks of who knows what and smelled &ldquo;like a dead dog,&rdquo; according to one taster, but was well liked by several drinkers (this reporter not included).

There were also food and shopping options at the festival, including an impressive cheese counter also serving giant wedges of flavored bread for just 50 pence per portion. Thai food, sausages and fish and chips also were available.

Members of a quartet of Americans at the festival said they would recommend beer festivals to fellow U.K.-based airmen as a diversion from base life and a change from night at a pub or club.

Where: Kingston Upon Thames, just southwest of London

Highlights: More than 450 real ales, giving it the title of the &ldquo;Biggest Pub in the World&rdquo;

Where: The Embankment, Peterborough