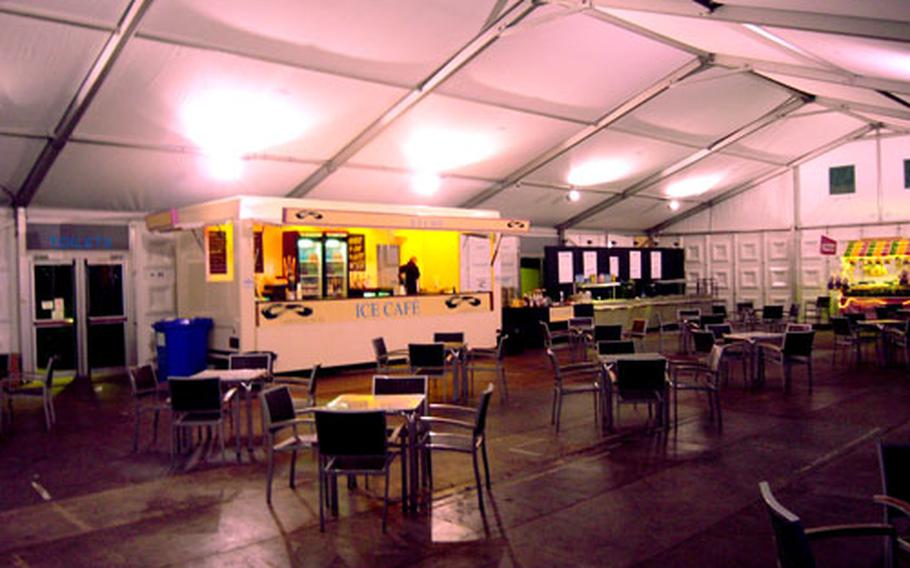 Oh what fun it is! Cambridge has introduced an ice rink in the middle of Parker&#39;s Piece for the holidays. (Geoff Ziezulewicz/S&S)

CAMBRIDGE &mdash; Certain things just make you feel all nice and festive for the holiday season.

You Americans from the south or west might not understand it, but for us easterners, northerners and Great Plains folk, a cold, white Christmas just can&rsquo;t be beat. Or cold, white Hanukkah, or cold, white Kwanzaa or whatever you and your families celebrate.

But England doesn&rsquo;t get America-cold, not for long. Forget about the old pond in your village freezing over to skate.

But fear not. You might not get those chilly temps or snow drifts, but you can skate outside on a permanently frozen pond through the holidays in downtown Cambridge.

Cambridge on Ice is in its first year of bringing skating to the masses at Parker&rsquo;s Piece, the big park situated on the northwest corner of Mills Road and the A603.

The rink&rsquo;s ice is kept solid by a series of freezing pipes beneath a sort of membrane, according to Steve Greenhalgh, a representative for the group putting on the event.

&ldquo;It&rsquo;s like under-floor heating, reversed,&rdquo; he said last week. &ldquo;There&rsquo;s no danger of a warm snap melting the ice and turning it into a swimming pool.&rdquo;

The rink was open for business last month and will stick around until Jan. 6, Greenhalgh said.

In addition to skating, there will also be ice bumper cars available, he said.

Those wanting to get their skate on should book in advance to ensure there will be a spot for them, he said, and skates will be available as part of the admission price.

The Cambridgeshire and Suffolk areas of England were one of the points of origin for skating in the country, he said.

In the 16th century, Dutch engineers busted out their skates when the local swamplike fens would freeze over.

&ldquo;As the fens froze over, they started to speed skate and it grew in popularity,&rdquo; he said.

With an adjacent caf&eacute; serving cocoa, snacks and mulled wine, the Cambridge rink is a perfect diversion to end a day or night of holiday shopping, Greenhalgh said.

&ldquo;It&rsquo;s a lovely way to kick off Christmas with your kids,&rdquo; he said.

What: An ice rink smack-dab in the middle of Cambridge, just in time for the holidays. It&rsquo;s electronically cooled, so no chance of a warm snap melting the fun.

When: Daily &mdash; except Christmas &mdash; through Jan. 6. Admission is on an hourly basis.

Where: Parker&rsquo;s Piece, the big park on the northwest corner of Mills Road and the A603.