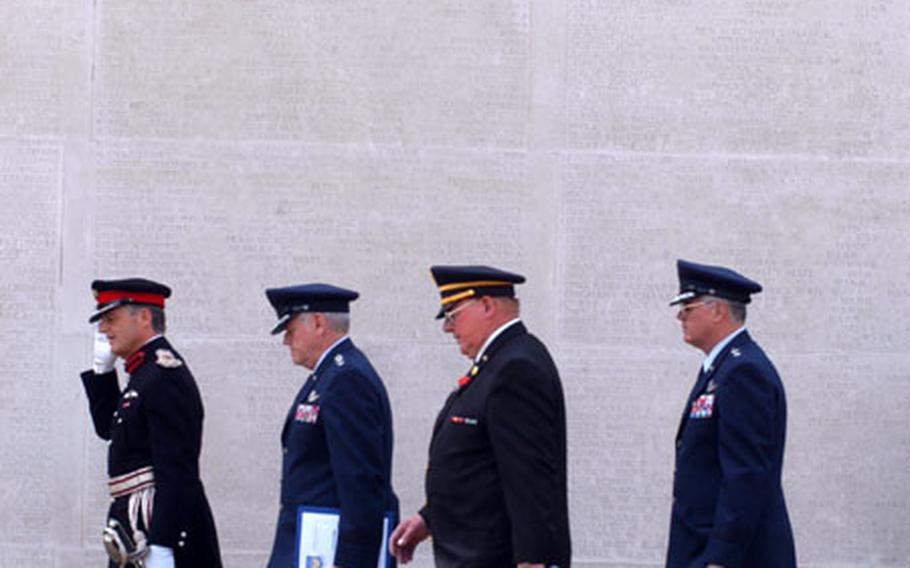 The official party arrives Monday for the Memorial Day ceremony at the Cambridge American Cemetery in Madingly, England. They pass the Wall of the Missing, which holds more than 5,000 names of missing U.S. servicemembers from World War II. (Ron Jensen / S&S)

The official party arrives Monday for the Memorial Day ceremony at the Cambridge American Cemetery in Madingly, England. They pass the Wall of the Missing, which holds more than 5,000 names of missing U.S. servicemembers from World War II. (Ron Jensen / S&S) 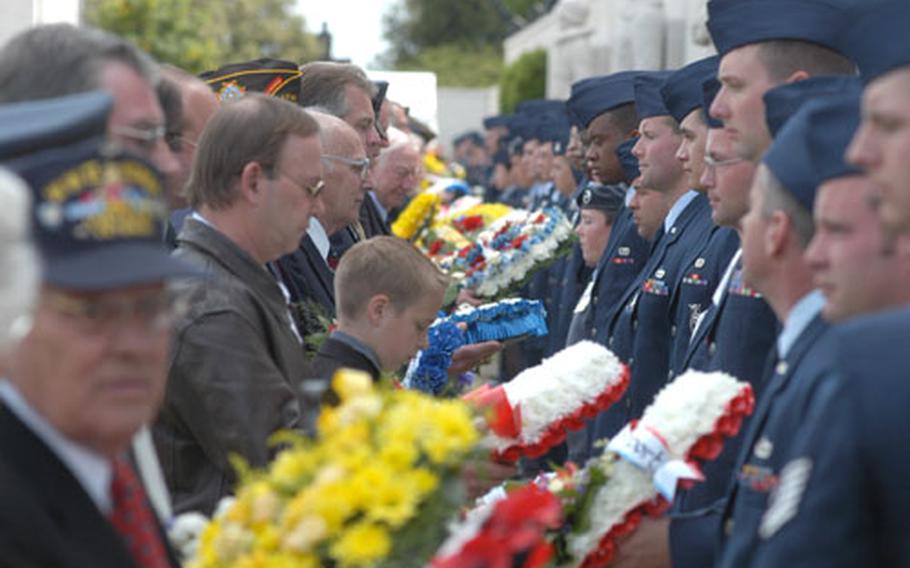 MADINGLEY, England &#8212; A bright English sun threw shadows of crosses and Stars of David across the hallowed ground at Cambridge American Cemetery as 1,500 people gathered Monday for a ceremony to remember those who died fighting America&#8217;s wars.

&#8220;We in Cambridge are proud of this piece of America in our midst,&#8221; said Michael Marshall, Vice Lord Lieutenant of Cambridgeshire, the Queen&#8217;s representative in the county.

He said the 3,819 graves and the 5,126 names on the Wall of the Missing are a constant expression of the sacrifice required for what we enjoy today.

Attending the ceremony was a mixture of Americans and Britons. Several World War II veterans were in the audience, and they were asked to stand and be recognized, bringing a long round of applause from the crowd.

The U.S. Air Forces in Europe band played, and 119 wreaths were laid along the Wall of the Missing, which includes the name of bandleader Glenn Miller carved among the missing.

Also attending were about 200 active-duty servicemembers, nearly all of them taking part in the ceremony, including 120 from Lakenheath who helped lay wreaths, and a color guard from RAF Molesworth. Others acted as escorts and provided security.

But despite the presence of roughly 10,000 active-duty troops stationed within one hour of the cemetery, those who attended simply to pay respects were as rare as an untrimmed hedge or a wayward weed at the well-manicured cemetery.

When asked why so few active-duty airmen were in attendance, despite having a day off work, he replied, &#8220;different priorities.&#8221;

There was talk of a high operations tempo and recent and ongoing deployments. But Airman 1st Class Jason Lamber, also a firefighter at RAF Lakenheath, said, &#8220;A lot of them don&#8217;t understand, and they take it for granted.&#8221;

Lt. Gen. Arthur Lichte, USAFE&#8217;s vice commander and a keynote speaker Monday, said in his remarks that no one should take for granted the sacrifice of such people.

He wondered, &#8220;How can we possibly take for granted freedom when we walk among these rows of white markers?&#8221;

Behind every cross and Star of David, he said, is a grieving family, a hometown in mourning.

But &#8220;the day will never come when America forgets them for what they did for this country and the world,&#8221; he said.

He said it is the duty of those alive today to maintain the memory of these fallen and pass along to those who come after what they did and what it meant.