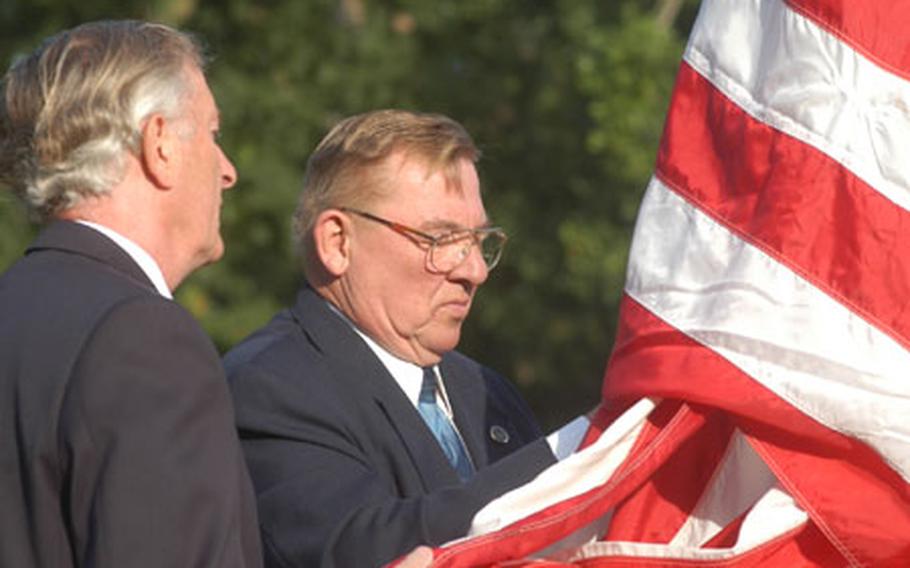 Bob Stone, left of the Royal British Legion, and Jim Schoenecker, superintendent of the Cambridge American Cemetery, raise a flag early Thursday at the cemetery. The flag belongs to an American veteran&#39;s widow and once flew above the White House. The ceremony also marked events of Sept. 11, 2001. (Ron Jensen / S&S)

MADINGLEY, England &#8212; About 20 residents of the English village of Swavesey were among those present early Thursday in a ceremony of remembrance at the Cambridge American Cemetery.

One flag belongs to Wilma Molpus, the widow of Lee Molpus, an American veteran who served in England during the 1950s. Her husband received the flag from a U.S. senator after it flew above the White House. She flew the flag at her house after the Sept. 11, 2001, terrorist attacks.

&#8220;She asked that we fly this flag at this cemetery,&#8221; said Jim Schoenecker, the cemetery superintendent.

It was raised and then lowered to half-staff briefly before it was replaced by the cemetery&#8217;s own flag, which spent the day at half- staff to honor those killed two years ago.

Of the nearly 3,000 killed when the twin towers of the World Trade Center fell to earth, 64 of them were British.

In the brief ceremony bathed by the English sun, a legion member read a statement prepared by the local chapter.

&#8220;We have come here today to share with you a few moments of thought, not only for your servicemen who lie in what will forever be a small part of America, but for all those people who lost their lives or were maimed on that terrible happening of the 11th of September, 2001,&#8221; the statement began.

It concluded, &#8220;On this day of remembering, praying for the world to be rid of violence must be our priority.&#8221;