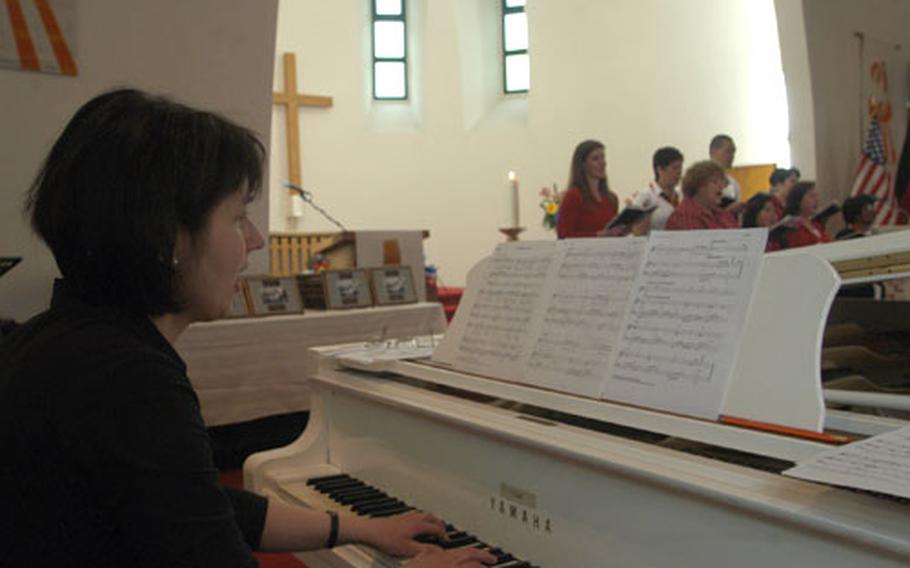 Luitgard Zotz, longtime pianist for Catholic services at the chapel on Cambrai-Fritsch Kaserne, plays during the chapel&#39;s decommissioning service Sunday. Zotz has attended services here since she was a child. Her father, Hermann Zotz, was the organist here from 1963 to 1988. (Matt Millham / S&S)

DARMSTADT, Germany &#8212; As the community&#8217;s faithful entered Cambrai-Fritsch Kaserne&#8217;s chapel on Sunday, ushers handed out programs with photos of the building taken 53 years ago this week, the anniversary of its commissioning.

But, as the program&#8217;s heading explained, this wasn&#8217;t a birthday party. It was a decommissioning service.

Built to serve the U.S. military community, the chapel has served not just as a temporary house of worship for servicemembers and their families, but has also drawn local Germans, whose presence has provided the continuity that otherwise wouldn&#8217;t exist.

Hermann Zotz, an 80-year-old German who started playing organ here in 1963, was in the audience and watched as his daughter, Luitgard, played piano for the crowd of Americans and locals.

Teddi Offenbecher, another German and longtime member of the chapel&#8217;s Catholic congregation, said she&#8217;ll do the same.

Offenbecher has been in charge of the congregation&#8217;s choir since 1987.

Over the years the building has seen weddings, baptisms, prayer services and memorials for fallen U.S. servicemembers.

&#8220;The decommissioning service isn&#8217;t so much about this building &#8230; but the faith that is in your hearts, the faith that you brought with you to this place,&#8221; Chaplain (Col.) Jerry L. Jones told the congregation during the ecumenical service.