Calm has market back in business 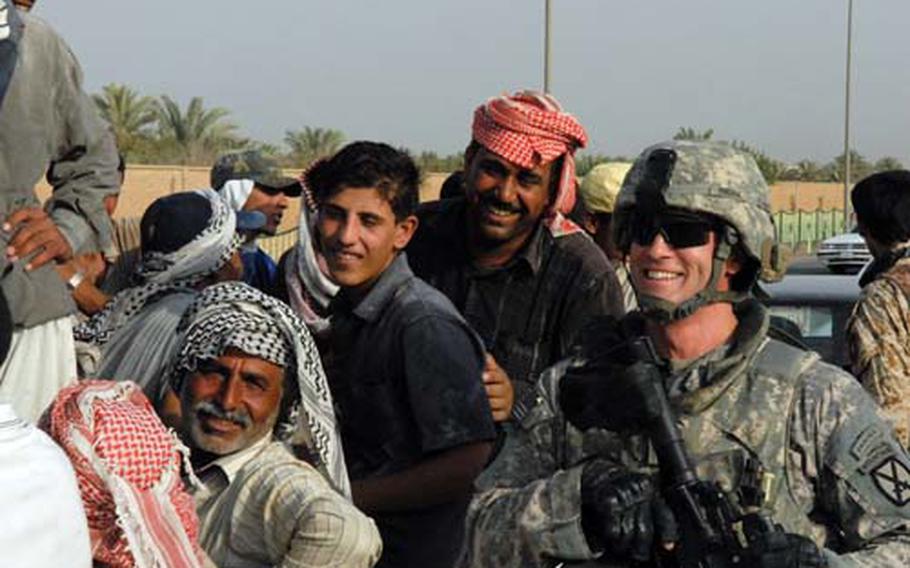 1st Lt. Luke Minogue of Alpha Company jokes with a truck full of Iraqis at a checkpoint in the Doura neighborhood in the Rashid District. The older men told Minogue the teen, well know to local troops, was actually a criminal mastermind, prompting laughter from both sides. (Leo Shane III / S&S)

BAGHDAD &#8212; Just one year ago, U.S. troops faced gunfire and roadside bombs all along the main stretch of the Dora market. Now, the biggest problem for them is squeezing through the streets during the busiest hours of the day.

"It&#8217;s really a credit to the people here," said Capt. Daryl Carter, company commander of the HHC, 2nd Brigade, 4th Infantry Division. "In the last five months this market has been safe, and in the last four months it&#8217;s been full of people.

Carter said regular U.S. patrols and Iraqi security forces checkpoints were key in turning the area around, but even more significant was the desire of locals to get back to running their shops and businesses.

On Monday, more than 2,000 locals browsed through the market in the morning, a crowd that troops said is typical for weekdays.

U.S. forces throughout the Dora neighborhoods of the Rashid District say they&#8217;ve been encouraged in recent months not only by the drop in violence but also by the change in attitude among residents in the neighborhoods.

"I think people now are aware that they can trust us, and they can trust the national police," said 1st Lt. Luke Minogue of Company A, 2nd Brigade, 4th Infantry Division. "It hasn&#8217;t always been that way."

He&#8217;s quick to point out that the situation isn&#8217;t perfect &#8212; recently, U.S. troops recovered a cache of explosives in an abandoned house. But the tip for that came from a nearby resident through the Iraqi security forces, a sign that at least some of the locals want to avoid more violence.

Minogue and his patrols pass through the northeast sector of Dora nearly every day. Business owners in the area recognize and greet them, and often ask about grants to help renovate their shops. Much of the troops&#8217; time is spent going from house to house, interviewing locals and leaving contact information for them to call with tips.

"The main complaint we&#8217;re hearing right now is about electricity," Minogue said. "But if they feel comfortable complaining to us about that, it means they aren&#8217;t as worried about harassment from the police, or security."

Carter said residents near the market started standing up to insurgents before Iraqi forces moved in nearby and started to focus in on the area.

Businesses in the market have talked about removing some of the nearby security walls, to allow residents from other neighborhoods in.

For his part, Carter&#8217;s favorite stop in the market is an electronics store next to a portrait studio, both offering luxury items he thinks signal new prosperity for the neighborhoods.

"[The market] is about half full now, and if they can get 80 percent of these stores full by the time I leave next year, I&#8217;ll consider this a big success," he said.

Audio clip1st Lt. Luke Minogue of Alpha Company, 2nd Brigade, 4th Infantry Division, talks about his troops&#8217; recent patrol though the Doura neighborhood of Baghdad and the recent success of Iraqi and coalition forces there.