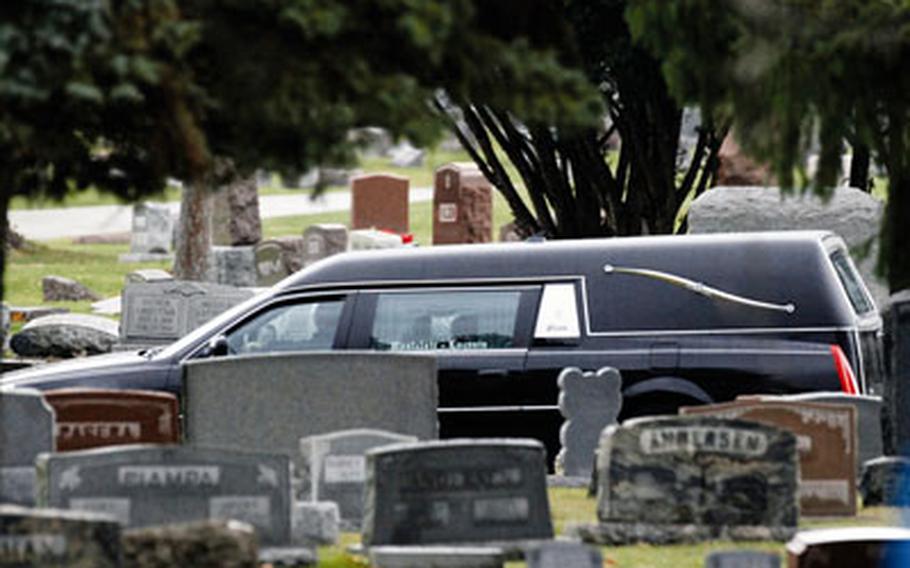 The hearse carrying the body of Army Pvt. Francheska Velez drives through the Mount Olive Cemetery on Thursday in Chicago. Velez, 21, who was pregnant, was among 13 people killed when a fellow soldier allegedly opened fire at Fort Hood earlier this month. Two U.S. senators and an anti-abortion group have urged that the death of Velez’s fetus be included in the murder charges. (Charles Rex Arbogast/AP)

Two U.S. senators and an anti-abortion group have urged that Hasan be charged with the murder of a fetus that died along with its mother in the shootings at Fort Hood this month, a young woman just back from Iraq and six weeks pregnant: Pvt. Francheska Velez.

"Both federal law and the Uniform Code of Military Justice allow for a murder charge when a person causes the death of an unborn child," Sen. Jim Risch, R-Idaho, told the Idaho State Journal. "It is important for this child to have justice and for recognition that this family suffered two deaths in this senseless rampage."

Whether Hasan will be charged with the fetal death is unknown.

"All evidence from the investigation is currently under review and no decision has been made regarding the preferral of additional charges at this time," Fort Hood officials said in a statement.

But the Army has never successfully prosecuted such a case.

Only one other death of an unborn child case has ever been filed, in 2007, and those charges were dismissed, according to the U.S. Army Court of Criminal Appeals.

The Air Force is thought to have had the first successful such prosecution. In May, an airman was convicted of attempting to kill an unborn child in a case in which the airman poisoned his wife to force a miscarriage. He had been charged, though, with killing an unborn child.

The Uniform Code of Military Justice added the crime in connection with a 2004 federal law that for the first time made it a separate offense to harm the fetus in a federal crime committed against a pregnant woman.

The controversial federal law, the Unborn Victims of Violence Act, amended the UCMJ by adding Article 119a. The article makes killing or injuring a fetus a separate crime in addition to the murder, manslaughter, robbery, maiming, arson or assault of the mother.

In two widely publicized cases involving troops accused of murdering pregnant women, neither defendant has been charged with fetal homicide, even though both victims, also military members, were in their third trimesters.

North Carolina is one of about 15 states that does not have a fetal homicide law.

Most murder cases are prosecuted in state courts, including those involving military members whose charged crimes occurred off base.

Just as the federal fetal homicide law does, the UCMJ&#8217;s Article 119a recognizes the earliest stages of prenatal development &#8212; a zygote or fertilized egg &#8212; as worthy of the same legal protection as its mother. It defines the fetus as "a child in utero" and a "member of the species homo sapiens, at any stage of development, who is carried in the womb."

The punishment for that separate offense is "the same as the punishment &#8230; had that injury or death occurred to the unborn child&#8217;s mother," the law says, although the death penalty is specified as not permissible.

Further, the law says that such prosecutions need no proof that a defendant knew or should have known that a woman was pregnant or that the defendant intended to harm the fetus.

The law&#8217;s proponents say the objective was to establish in criminal law that a fetus killed or injured in an assault was just as much a victim as its expectant mother, and that it would protect pregnant women from assault.

But opponents said it was a back-door way to provide "personhood" to fetuses and so erode abortion rights.

"The purpose of &#8216;personifying the fetus, of course, is to set up an inevitable conflict, conceptually and legally, between a woman&#8217;s right to choose abortion, as defined by the court in Roe v. Wade, and a fetus&#8217;s &#8216;right to life,&#8217; " according to a public policy report by the Guttmacher Institute, a nonprofit organization that researches reproductive health issues and supports abortion rights.

By "labeling the fetus even in its earliest stages an &#8216;unborn child&#8217; in the Unborn Victims of Violence Act, anti-abortion strategists are seeking to lay critical groundwork for Roe&#8217;s eventual demise," the report said.

Of the 35 states that have enacted fetal homicide laws, 25 make it a separate crime to harm a fetus starting at conception; 10 other states have varying requirements, such as fetal viability or after "quickening" or movement in the womb. The state laws have been upheld on appeal.

All fetal homicide laws specify that a pregnant woman may not be prosecuted for having an abortion or somehow harming her own fetus. But the National Advocates for Pregnant Women say that some states have used those laws declaring the fetus a child to prosecute women for "child abuse" if they used drugs or alcohol while pregnant.

So prosecuting Hasan under 119a would add another layer of complexity and politics in an already big, emotionally fraught case.

"It&#8217;s a political issue, it was a political hot potato then, and potentially still is &#8230;," wrote Philip Cave, a former Navy lawyer now in private practice on his Web site, court-martial.com.

"He&#8217;s got 13 murder raps on him. Why complicate the issue?" said David Court, a longtime military defense lawyer based in Germany.

Last month, a U.S. federal district court judge in New Mexico granted motions to reschedule a trial in what is believed to be the first federal UVVA case, the killing of a pregnant woman by her boyfriend that occurred on a Navajo reservation in December.

The lawyers needed more time, the judge agreed, because the indictment "raises novel questions of law &#8230;. The constitutional issues arising from this prosecution are indeed unusual and complex."

In May, an airman at Elmendorf Air Force Base in Alaska became what&#8217;s believed to be the first military defendant convicted under Article 119a.

Airman 1st Class Scott Boie was convicted of assault and attempting to kill an unborn child after lacing his pregnant wife&#8217;s food with an ulcer drug known to cause miscarriages, and she miscarried, according to news reports.

The military jury acquitted him of killing an unborn child.

He was sentenced to nearly 10 years in prison. As of yet, there has been no appeal, said the clerk of the U.S. Air Force Court of Appeals.