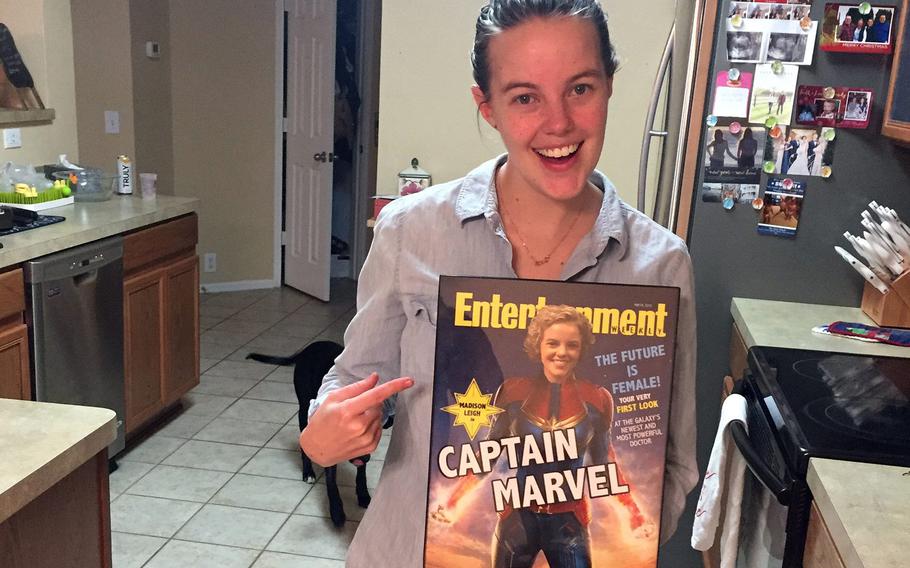 Air Force Capt. Madison Marvel is pictured here on Wednesday, March 6, 2019, holding a poster her parents made for her, which put her face on the body of Brie Larson in costume as superhero Captain Marvel on a September 2018 cover of ''Entertainment Weekly.'' (Courtesy of Madison Marvel)

Air Force Capt. Madison Marvel is pictured here on Wednesday, March 6, 2019, holding a poster her parents made for her, which put her face on the body of Brie Larson in costume as superhero Captain Marvel on a September 2018 cover of ''Entertainment Weekly.'' (Courtesy of Madison Marvel) 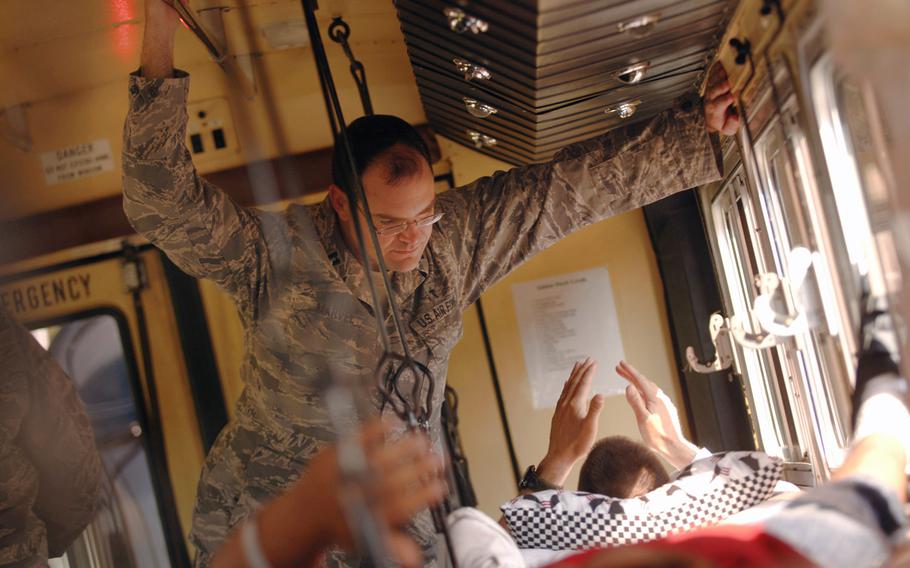 Now a lieutenant colonel, Chaplain Jake Marvel is pictured here as a captain speaking with an injured soldier awaiting aeromedical evacuation to a medical facility in the United States from Ramstein Air Base, Germany. (Scott Wagers/AFNEWS) 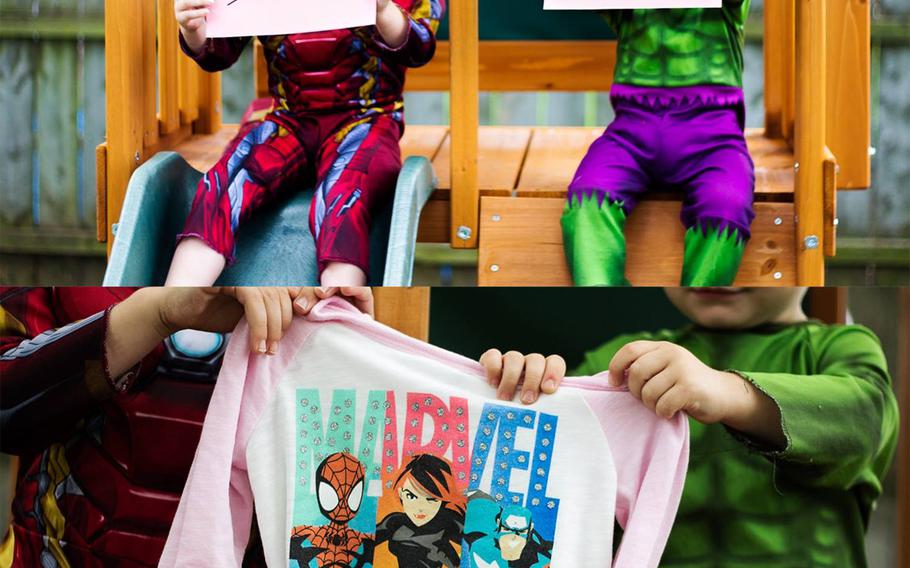 Four-year-old Levi, left, and 2-year-old James Logan, the children of Capt. Zack Marvel and his wife, MaryKate, announce the expected birth of their little sister, Aurora. (Courtesy of MaryKate Marvel) 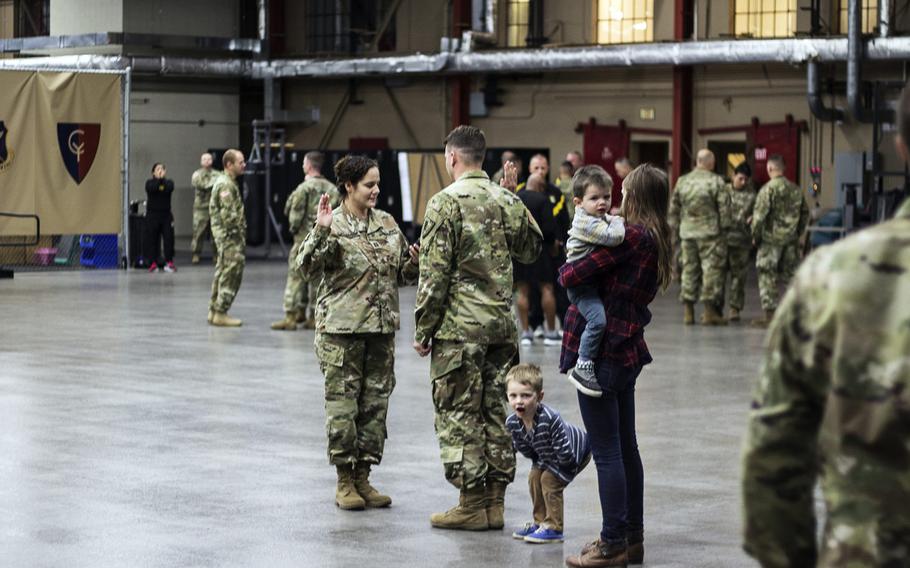 In this family photo, Indiana National Guard finance officer Zack Marvel takes an oath during a ceremony on Nov. 2, 2018, in which he was made a captain, accompanied by his wife MaryKate and sons Levi and James Logan. (MaryKate Marvel/courtesy) 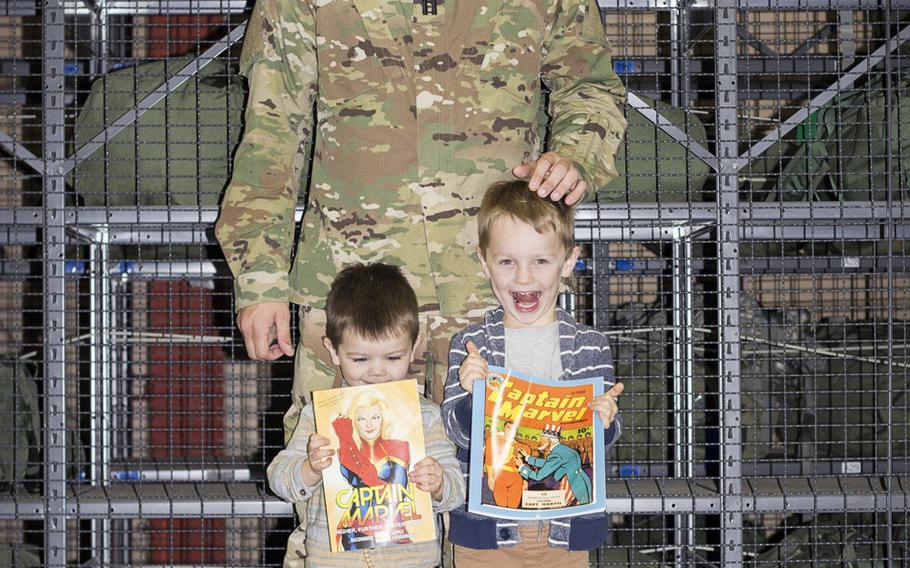 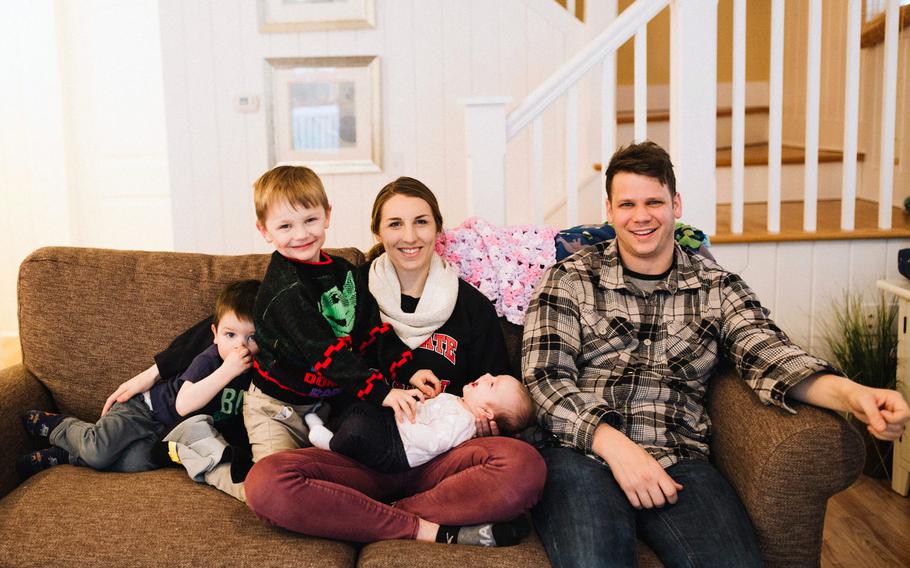 When Zack Marvel was promoted in November, his wife posted a photo of him and his two young sons each holding comic books bearing their father’s rank and name.

“Good job and thank you for your service Captain Marvel!” MaryKate Marvel wrote in the post. “I know 2 little boys who already thought you were a superhero.”

The mild-mannered Indiana Army National Guard finance officer is one of only two servicemembers with the superhero rank and surname appearing in the military’s global email address list. Though neither admitted to having superpowers, both described how the lead-up to the release of two big-budget action films has been an exciting time to be wearing captain’s bars.

Disney’s “Captain Marvel,” produced with Defense Department cooperation and featuring a female Air Force pilot as its protagonist, opens Friday. Hitting theaters less than a month later, on April 5, is the Warner Bros. film “Shazam!,” based on the original Captain Marvel from the 1940s — though for legal reasons he’s no longer called that.

“It’s funny that both movies are coming out right after I got promoted,” Zack Marvel told Stars and Stripes. Later, he added: “It’s going to be hard letting go of that captain rank, though, going to major and lieutenant colonel.”

Air Force Capt. Madison Marvel, a pediatric intern at Brooke Army Medical Center in San Antonio, has early memories of dressing up as DC Comics’ Wonder Woman as a child and being fascinated with her costume’s golden lasso, but she’s looking forward to the movie based on the Marvel Comics character who shares her name.

“I’m just really excited to see a female superhero and ... what strengths and weaknesses they kind of pull out of her character,” she said.

Growing popularity No Captain Marvel character has had the enduring popularity of Spider-Man or Batman, or even that other company grade superhero Captain America — there are no current captains with the last name America listed in the military’s email list — but hype for the Marvel movie has grown through its connection to a larger franchise.

A scene in last year’s “Avengers: Infinity War” hinted that the character would play a key role in its sequel, which culminates a decade of Marvel movies when it opens in April.

The Captain Marvel solo film, set in 1995, is expected to introduce audiences to the superheroine’s origins. It stars Brie Larson as fighter pilot Carol Danvers, who in the comics was known as Ms. Marvel until she was promoted about seven years ago.

When Madison Marvel started serving on active duty as a captain after medical school last summer, many of the patients she saw were already aware of the upcoming film. There have been few days someone hasn’t said something about it to her, she said. Not too long ago, a passer-by asked to take a picture with her.

Jake Marvel remembers teasing his friends about having superpowers, threatening to say the magic word “Shazam,” which in the original Captain Marvel comics turned kid radio reporter Billy Batson into “Earth’s mightiest mortal” — essentially a Superman rip-off that first appeared in Fawcett Comics and was reintroduced by DC in the 1970s.

Now a chaplain in the New York Air National Guard, Jake Marvel is one of two lieutenant colonels with the powerful surname listed in the military’s global email address book, which also includes a cadet, a Navy lieutenant junior grade, and a smattering of enlisted troops who share the name, believed to be of French origin.

At an inspection at his unit last year, Jake Marvel was introduced as “our former Capt. Marvel,” he said. A longtime fan of the Marvel movies, he slightly regrets getting promoted.

“You can pay me more, but I would rather remain Capt. Marvel,” he said.

A chaplain in both civilian and military life who often tries to help people find their unique purpose, he said, he hopes “Captain Marvel” will help inspire his teenage daughters to “focus on who they are and what gifts they have for the world.”

Doctor Marvel The chance to be Capt. Marvel played only a small part in Madison Marvel’s decision to join the military during her first year of medical school — opportunities for overseas assignments, belonging to a tight-knit community and more professional concerns mattered more. Still, it helped seal the deal.

“I found out you could be commissioned as captain and I was like, ‘Alright, sold,’” she said.

For Christmas, her parents made a poster using the cover of September’s “Entertainment Weekly,” which featured Larson in costume, but photoshopped to feature Madison Marvel’s face and name. Knowing she wanted to be a pediatrician, they had long advised her to keep the Marvel name for professional reasons.

“Everyone will want to come see Dr. Marvel,” they would tell her.

A little over a year ago, when she married the boyfriend she’d dated since high school, she knew she had to keep her maiden name. His last name is Smith.

But, despite the growing excitement for the film, she’ll have to wait to see it. Less than six weeks ago, she gave birth to her first child, Wayne Lee Marvel — named for loved ones but with comic book echoes with Batman’s billionaire alter ego and comic book giant Stan Lee, she said. She’s hoping to see it with her husband when in-laws come to town to baby-sit next week.

‘Daddy Captain Marvel’ Growing up in Indiana, Zack Marvel could move heavy equipment by the time he was 8, driving the machines owned by his father’s construction firm. He didn’t dig into comics until middle school, after some peer pressure over his name.

After high school, he enlisted in the Army Reserves in 2009. “I felt like I wanted to serve my country,” he said.

In basic training, captains would occasionally walk up to him and remove his nametape from his uniform without asking and take pictures with it, he said. After training to be a military truck driver, he became a cadet in the Reserve Officer Training Corps while studying economics and business at Indiana’s Ball State.

As a junior, he developed a special ability to repair and refurbish electronics as a way to make extra money, building a business around that skill, which he still operates. In his dual identity as an officer in the National Guard, he has deployed to Slovakia, but hasn’t gotten to do anything “super special,” he said.

“Finance isn’t like [a job in which] they want to give you all the cool training,” he said. “It’s a very, not very sexy job, but it’s a job that needs to get done.”

A father of three — 4-year-old Levi, 2-year-old James Logan and newborn Aurora — he’s been known to dress up as Captain America, he said.

Still, he has trouble convincing his youngest son, named after Marvel’s Wolverine, to refer to him by any other name.

“I’ve corrected him so many times,” Zack Marvel said. “He will not stop. He calls me Daddy Captain Marvel, Captain Marvel [that] is all he calls me.”