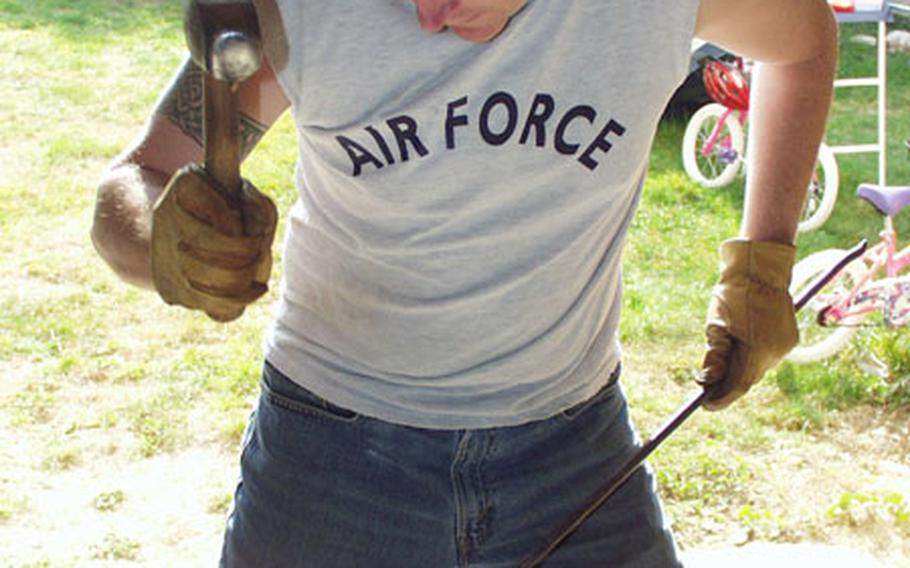 Airman 1st Class Charles Johnson works on making a candlestick at the forge he has set up at his home in Budoia, Italy. Johnson, a customer service representative at the Air Mobility Command&#39;s passenger terminal at Aviano Air Base, is an accomplished blacksmith. (Kent Harris / S&S)

Airman 1st Class Charles Johnson works on making a candlestick at the forge he has set up at his home in Budoia, Italy. Johnson, a customer service representative at the Air Mobility Command&#39;s passenger terminal at Aviano Air Base, is an accomplished blacksmith. (Kent Harris / S&S) 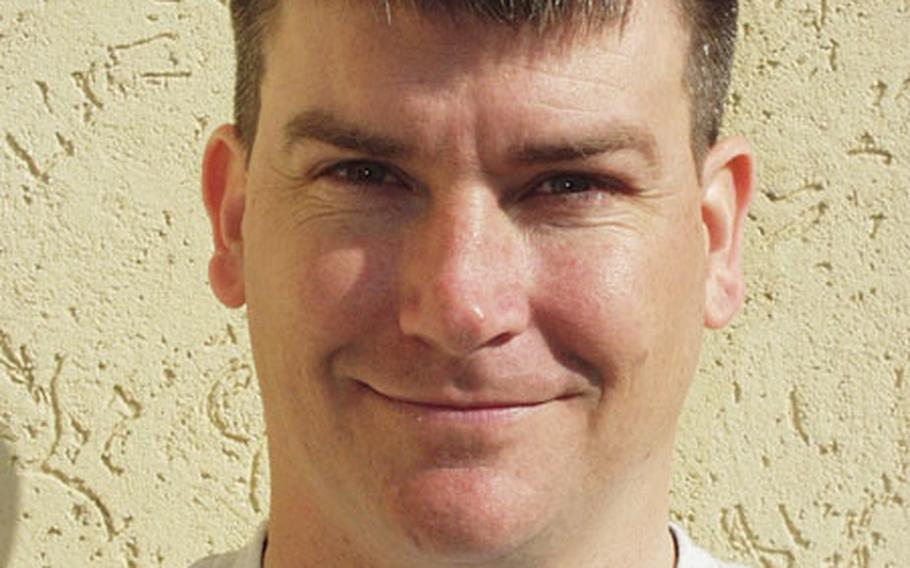 BUDOIA, Italy &#8212; Charles Johnson is an artist with a heavy hammer in his hand. But after terrorists attacked New York&#8217;s World Trade Center on Sept. 11, he decided he needed to step away from the anvil &#8212; and his blacksmithing business &#8212; and serve his country.

Airman 1st Class Johnson is a customer service representative at the Air Mobility Command&#8217;s passenger terminal at Aviano Air Base. Although he&#8217;s a late convert to the military, he says he&#8217;s enjoyed his 13 months in the Air Force.

Johnson takes some pride in the fact that he&#8217;s a little older than most people who carry his rank.

Tech. Sgt. John Samson, the passenger service supervisor at Aviano, said Johnson is a valuable member of his team.

&#8220;He&#8217;s absolutely the best,&#8221; Samson said, adding that he has received several compliments about Johnson from customers.

Samson said Johnson is a quick learner and always seems ready to take on a new task or additional training. He attributes at least some of that to his age and maturity.

Johnson hasn&#8217;t given up on blacksmithing and has set up a makeshift forge next to his home. He just is not doing it to make a living right now.

There aren&#8217;t a lot who are. Blacksmithing, for many, is something associated with the past &#8212; outfitting mounts for cowboys or making swords for knights.

Or just about anything out of metal.

Johnson said he grew up with an interest in the work.

And he picked up more with a few apprenticeships. Eventually, he decided to set up shop on his own.

He moved to Banta, a small town in California&#8217;s fertile Central Valley. There, he specialized in artisan work &#8212; creating fancy things out of metal that people might put in their homes. But there was always work that farmers in the area wanted done.

He said he often didn&#8217;t know for whom he was doing the work until the person came to pick up the finished work.

He said he was a mini-celebrity at the local school and could always attract crowds at Renaissance fairs and other craft events.

Not that he&#8217;s adverse to using some modern technology himself. He uses a portable forge run on propane gas. He said it has several advantages for him over the traditional forges employed by blacksmiths for centuries. It can maintain a precise heat indefinitely. It allows him to work instead of keeping the fire stoked. And it&#8217;s a lot easier to pack and move around in a household goods shipment.

He knows his anvil, for instance, is at least 150 years old. It was made by a British company that stopped producing them in 1850. And he said distinctive markings on it indicate that it was used during the California gold rush.

These days, blacksmithing is essentially a hobby for him. He admits to be a little rusty using his hammer, because he hasn&#8217;t done it much.

Johnson says he&#8217;d like to retire from the Air Force, then spend the rest of his life in front of a forge. By then could be wearing his share of medals &#8212; and not ones he&#8217;s fashioned by hand.