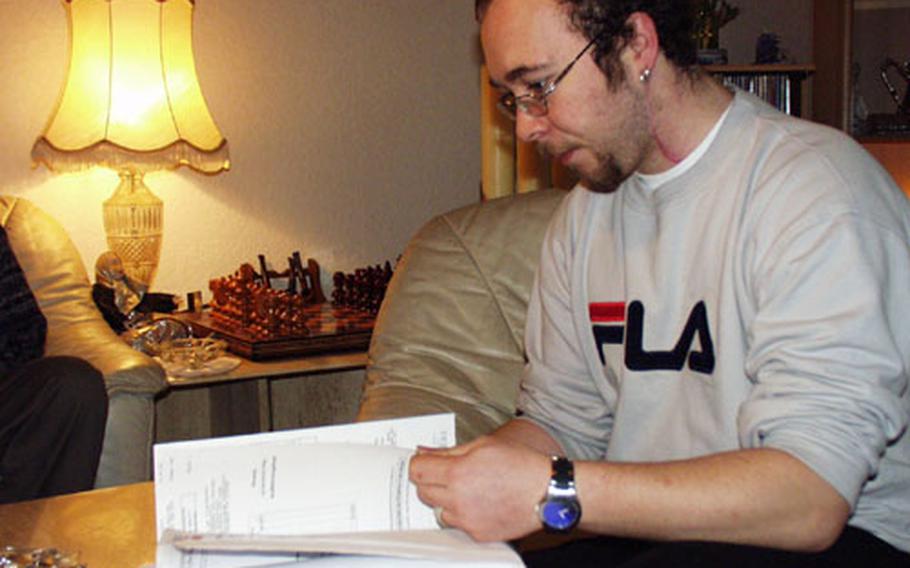 Alexander Hofmann thumbs through a scrapbooks of newspaper clippings and documents about his near-fatal stabbing last June while driving a taxi in Schweinfurt, Germany. The only suspect is an American soldier stationed at Schweinfurt&#39;s Conn Barracks, but Hofmann and his family are afraid the soldier is about to be discharged and sent home without a trial. (Randall Hunley / Special to S&S)

Alexander Hofmann thumbs through a scrapbooks of newspaper clippings and documents about his near-fatal stabbing last June while driving a taxi in Schweinfurt, Germany. The only suspect is an American soldier stationed at Schweinfurt&#39;s Conn Barracks, but Hofmann and his family are afraid the soldier is about to be discharged and sent home without a trial. (Randall Hunley / Special to S&S) 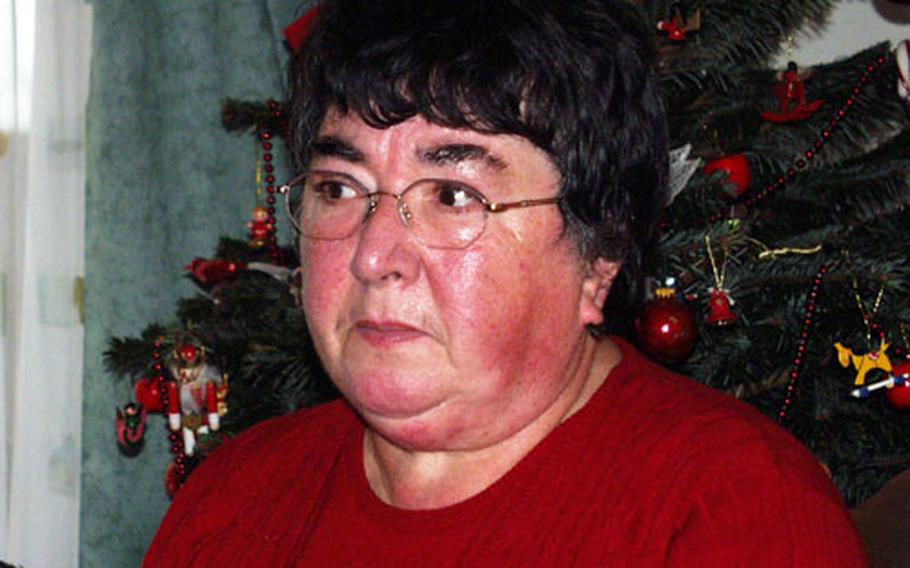 SCHWEINFURT, Germany &#8212; Schweinfurt taxi driver Alexander Hofmann never saw the knife blade before it was plunged once, twice, deep into his throat.

After a seven-month struggle to recover from near-fatal injuries, Hofmann fears the Army is about to discharge the soldier police believe stabbed him, without ever sending him to trial.

The Army won&#8217;t discuss the case officially because the investigation is continuing. Unofficially, though, a source familiar with the case said Army Criminal Investigation Command agents don&#8217;t have enough evidence to charge him.

Hofmann, then 24, had been driving one of his father&#8217;s family-owned taxis on a slow Sunday evening last June.

Sometime after midnight, he stopped to pick up a young man with brown hair, cropped short on the sides but longish on top and frosted with blond.

Hofmann said the man spoke in English &#8212; not terribly unusual in Schweinfurt, home to the American 1st Infantry Division&#8217;s 2nd Brigade. The stranger told him his name, his unit and where he came from in the United States &#8212; &#8220;normal conversation,&#8221; the taxi driver said.

Hofmann took the man to a bordello and waited outside. After a moment, the man returned and asked to be taken back to his car on Fischerrain Stra&#223;e, not far from the Army&#8217;s Conn Barracks.

After they drove back, the man got out and stood outside the driver&#8217;s window. Hofmann thought the soldier was going to pay him and started adding up the fare.

Bleeding, Hofmann stepped on the gas and pulled around a corner onto a main road. He hit his emergency call button.

Within minutes, a dozen or more cabbies had raced to the scene. The last thing Hofmann remembers before losing consciousness is whispering to his colleagues that the attacker was American, and he was white.

An ambulance rushed Hofmann to a hospital in Schweinfurt, then to the larger University Klinik about 30 miles away in W&#252;rzburg. Doctors feared he would die. His fragile condition caused extra problems for the German polizei.

Schmitt said about 100 police searched the area in vain for the knife. From eyewitnesses, though, they learned that a small silver American sports car with an HK license plate &#8212; a type issued only to Americans in Germany &#8212; had sped away from the area just after the attack.

Within minutes of the attack, Schmitt said, a car matching that description was stopped at a routine police checkpoint not far from where Hofmann was stabbed. The police there hadn&#8217;t yet received a description of the speeding car, so they didn&#8217;t detain the driver.

About two weeks later, though, they tracked down the car&#8217;s owner, a 20-year-old 1st ID soldier who lives at Conn Barracks. The police brought him in for questioning.

Schmitt said the soldier was sent to the U.S. Army hospital at Landstuhl for a psychiatric evaluation.

The soldier, Schmitt said, remains the only suspect.

Hofmann woke up from his coma in late June, then remained in the hospital&#8217;s intensive-care unit for three more weeks. He didn&#8217;t return home until early September.

Today, Hofmann still has only limited use of his left arm because one of the wounds severed a nerve. He speaks in a whisper because of the damage to his vocal cords, and he cannot swallow food unless it is cut into extremely small bites and he chews very slowly. Doctors say the problems likely will remain with him for the rest of his life.

Just before Christmas, Hofmann told his story for the first time to the German media as well as Stars and Stripes. He has heard that the soldier suspected of the crime is about to be dishonorably discharged on a drug charge and sent home to the United States.

An Army source refused to provide details because of Privacy Act restrictions, but confirmed the suspect faces disciplinary action unrelated to the attack on Hofmann.

Although German and U.S. military police are partners in the investigation, the soldier would be tried in a military court under the Status of Forces Agreement. Hofmann thinks it unlikely the suspect ever would stand trial if he left the Army.

He hopes soldiers from Conn Barracks who are familiar with the suspect might read about the case and tell investigators what they know.

Hofmann said he is especially concerned the suspect is about to leave just as police have uncovered what could be a key piece of evidence. Three weeks ago, searchers found a knife near the crime scene that apparently was missed last summer. German authorities are still awaiting the results of DNA tests that might link it to Hofmann or the suspect.