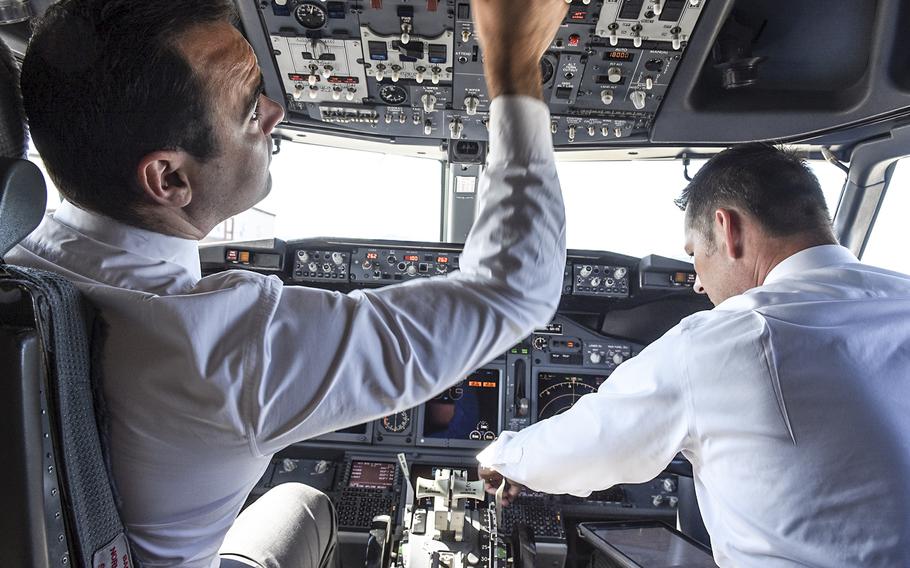 Maj. Clark Condict, left, and Maj. Bryan Guidry prepare the C-40B for its last departure from Ramstein Air Base, Germany, before transferring to Joint Base Andrews in Maryland, on June 7, 2019. (Jennifer H. Svan/Stars and Stripes)

Maj. Clark Condict, left, and Maj. Bryan Guidry prepare the C-40B for its last departure from Ramstein Air Base, Germany, before transferring to Joint Base Andrews in Maryland, on June 7, 2019. (Jennifer H. Svan/Stars and Stripes) 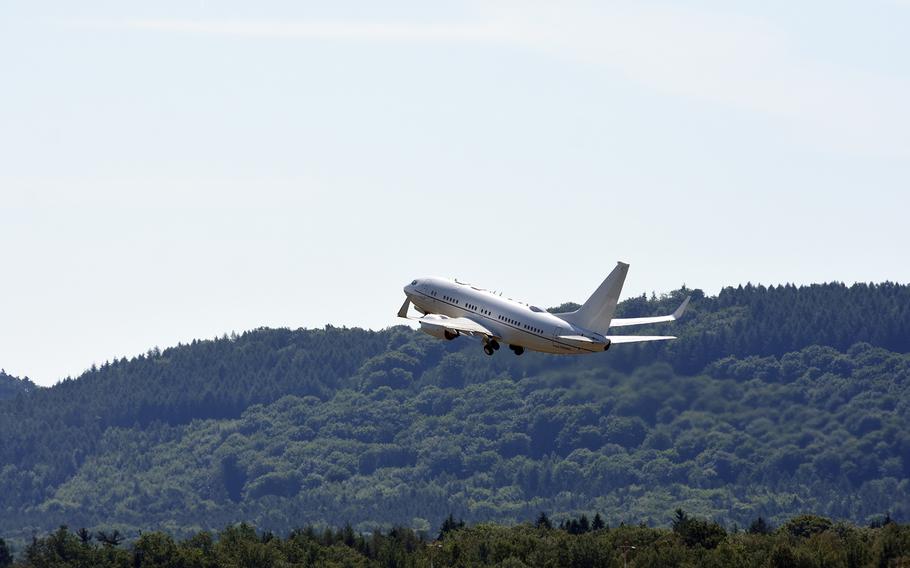 A C-40B takes off from Ramstein Air Base, Germany, on Friday, June 7, 2019, en route to its new home at Joint Base Andrews in Maryland. The plane, tasked with transporting combatant commanders and other high-ranking officials, was based at Ramstein since 2005. The Air Force is consolidating the mission stateside. (Jennifer H. Svan/Stars and Stripes) 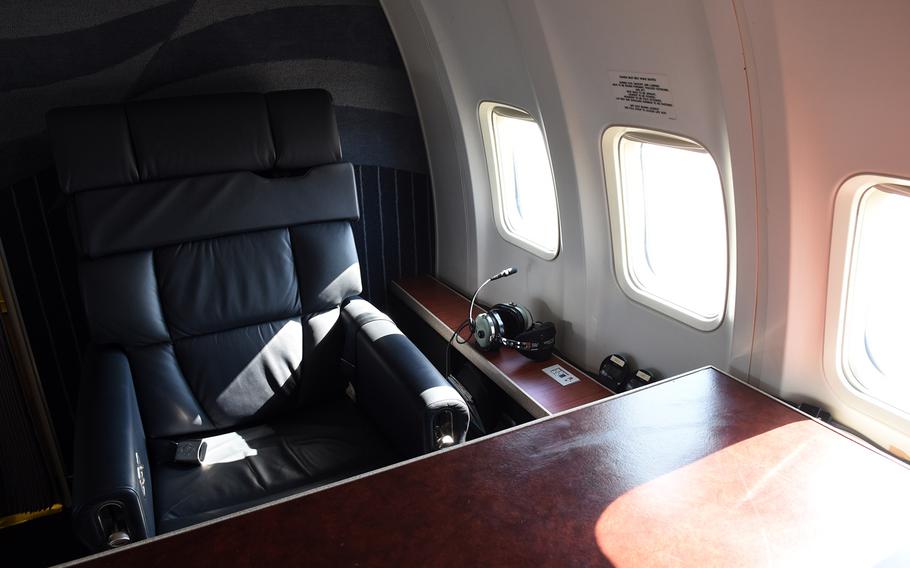 The cabin of the C-40B is designed to be "an office in the sky" for its high-ranking passengers. (Jennifer H. Svan/Stars and Stripes) 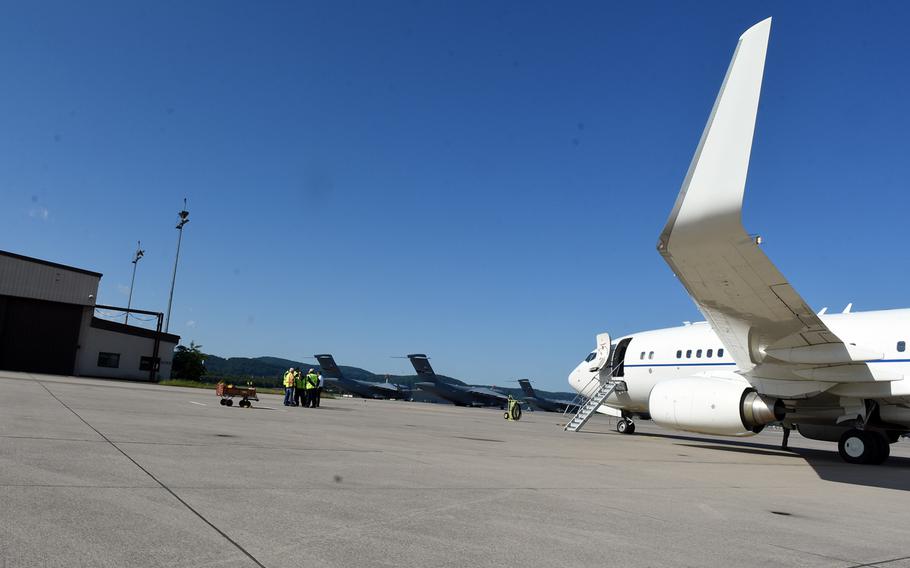 A C-40B sits on the flight line at Ramstein Air Base, Germany, on Friday, June 7, 2019, for perhaps the last time in a while. The plane and its mission - transporting combatant commanders and other high-ranking passengers - is moving to Joint Base Andrews in Maryland. (Jennifer H. Svan/Stars and Stripes)

RAMSTEIN AIR BASE, Germany — The aircraft designed to be an “office in the sky” for senior military and government leaders flew out Friday for its new home at Joint Base Andrews in Maryland.

Ramstein has hosted the Boeing C-40B, a military version of the 737-700 business jet, since 2005. The twin-jet plane known as “Clipper” shuttles combatant commanders and other high-ranking officials around the world for official travel, giving them a secure means to conduct business in the air and a spacious, comfortable ride that beats even commercial first-class passage.

To save money, the Air Force is consolidating the C-40B mission to one location, officials at Ramstein said.

Andrews is set to receive the C-40B based at Hickam Air Force Base, Hawaii, in addition to Ramstein’s, said Maj. Clark Condict, a C-40 instructor pilot who will transfer to Andrews in July.

On Friday, Condict was at the plane’s controls along with Maj. Bryan Guidry for the plane’s last flight out of Ramstein while still assigned here.

They were headed to Cannes, France, “to pick up our party,” Condict said, and then flying on to Macedonia.

The plane’s primary mission while at Ramstein was to support the U.S. European Commander/Supreme Allied Commander Europe. In that role, the aircraft could transport about two dozen passengers and fly all over the world.

Others, such as White House staff and members of Congress were also occasional travelers. Its auxiliary fuel tank allows it to engage in long-range flights far beyond the limits of commercial 737s.

“This jet is something special,” Guidry said. “I came from C-17s before. I love flying the ‘17 ... but here, we’re flying around dignitaries, generals, senators, representatives, you name it.”

Even with such a high-ranking passenger list, Guidry said flying the C-40 didn’t come with much added pressure.

“The optics are very important,” he said. “Making sure that everything looks right, is on time. You don’t want to have any delays; you know that it could very well end up in the newspaper.

“But as far as the flying aspect, there’s always pressure,” he said. “You always want to get there safely and have a smooth landing.”

Inside the plane’s spacious cabin, passengers can hold a meeting around a table, conduct secure video teleconferencing, speak on telephones that come with the plane and use commercial Wi-Fi, among other features. A couch that folds out into a bed provides a comfortable place to catch a few hours of sleep while in transit.

The quality of food also matched its clientele: Guidry remembers one dish in particular, fried rice served in a pineapple cut in half.

Ramstein will still maintain a small fleet of Gulfstream C-37s. The aircraft perform the same mission as the C-40B, though provide about half the space, Condict said, noting the plane is limited to about 12 passengers.

But given enough advance notice, Condict said a C-40 could be tasked from Andrews to fly to Europe to pick up the EUCOM or Africa commander and their parties, if the need arises.

The C-40B crew at Ramstein was part of the 76th Airlift Squadron. Five pilots will transfer to Andrews, as well as a handful of flight attendants.

“It’s been busy and exciting,” Condict said. “Definitely a very unique mission that I’m proud to be a part of.”