C-23 Sherpa: 'The aircraft that can' in Iraq 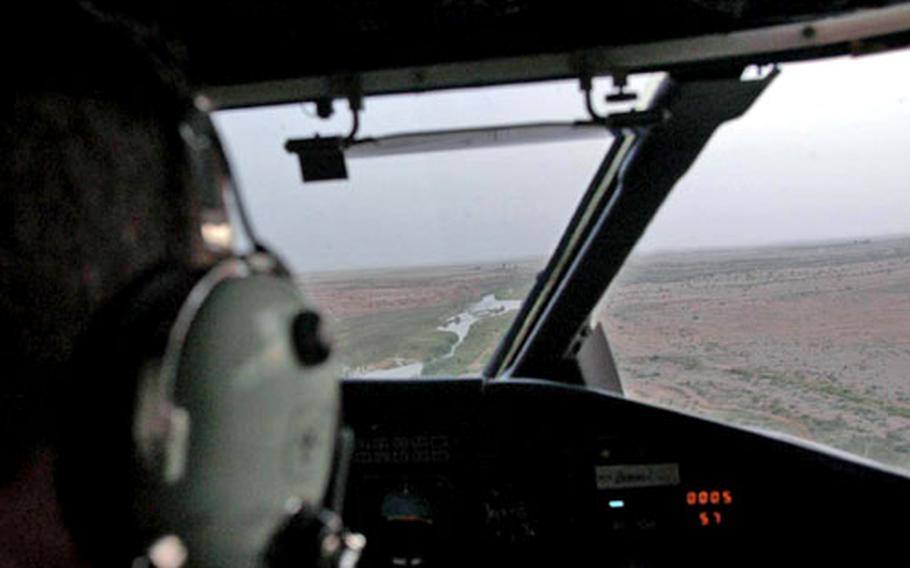 From the cockpit of the C-23 Sherpa, the view over Iraq is crisp and clear — probably because it’s 100 feet or less to the ground. The pilots, including Chief Warrant Officer 4 Ken Long, pictured, keep the Sherpa low and fast to reduce exposure to attacks. (Juliana Gittler / S&S)

From the cockpit of the C-23 Sherpa, the view over Iraq is crisp and clear — probably because it’s 100 feet or less to the ground. The pilots, including Chief Warrant Officer 4 Ken Long, pictured, keep the Sherpa low and fast to reduce exposure to attacks. (Juliana Gittler / S&S) 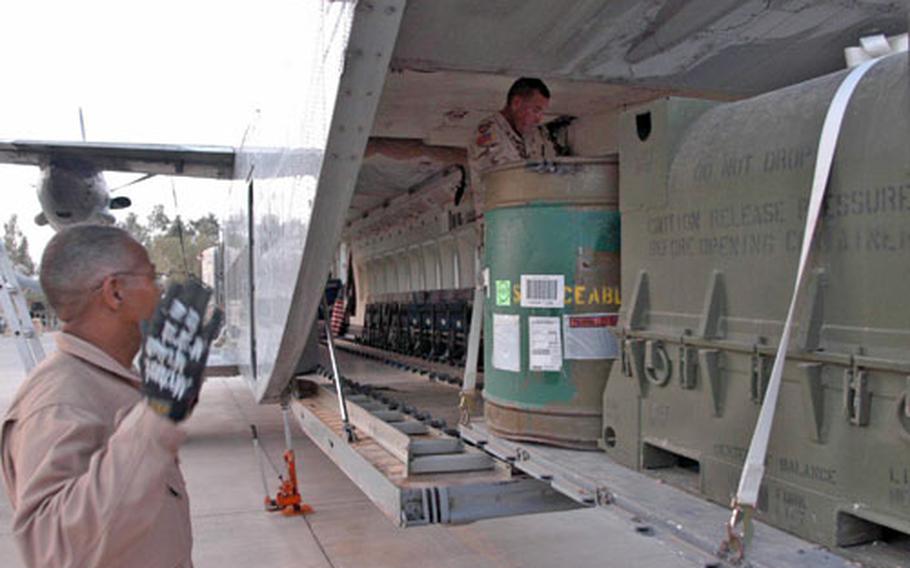 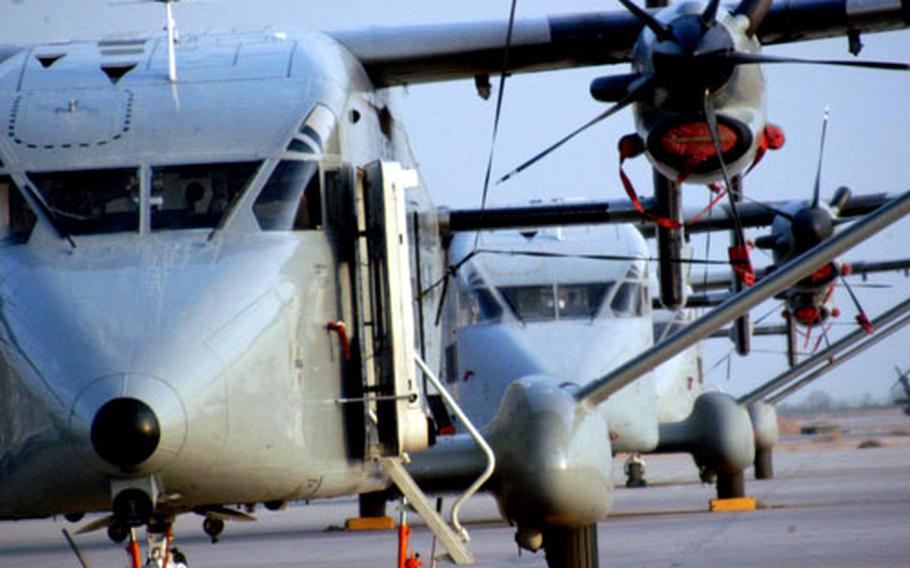 Boxy and utilitarian C-23 Sherpas at Balad air base wait to carry cargo and people to airstrips around Iraq. (Juliana Gittler / S&S) 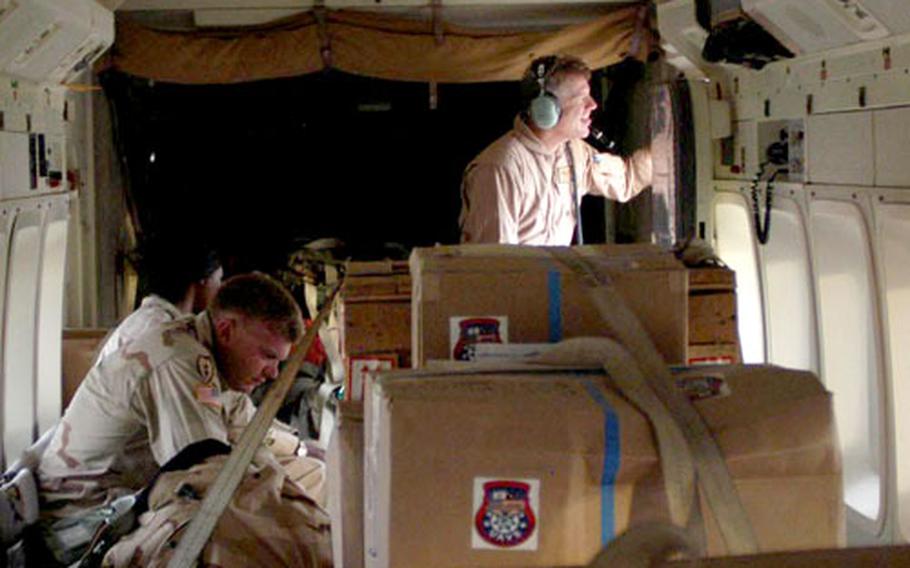 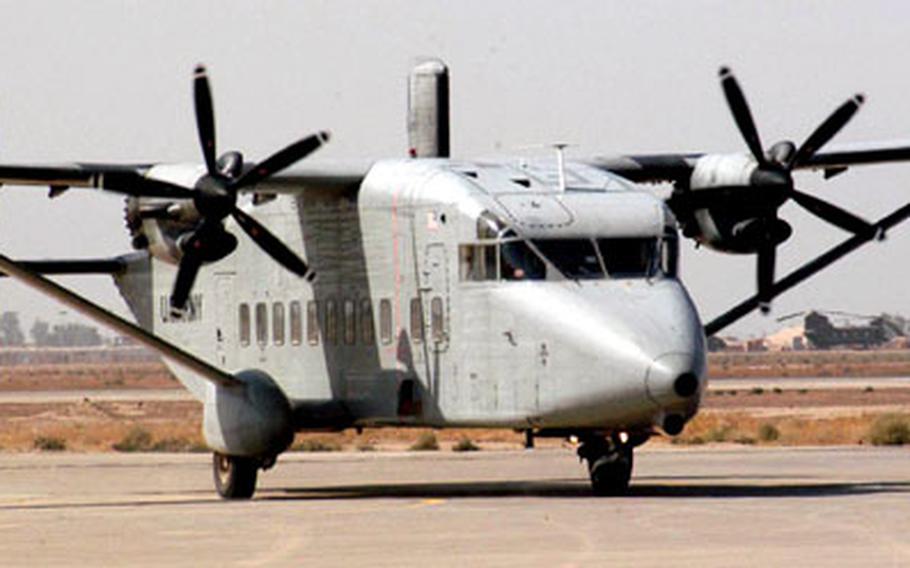 Buy Photo
A C-23 Sherpa belonging to the Army National Guard returns from a mission in Iraq in this undated file photo. (Juliana Gittler/Stars and Stripes)

BALAD AIR BASE, Iraq &#8212; Fourteen hours before takeoff, the operations center of the 171st Aviation Regiment, owner of the C-23 Sherpa, gets a call that absentee ballots must absolutely, positively get to an airfield southwest of Mosul.

Can it do it? Of course.

Throughout the evening, he&#8217;ll continue to change the cargo list: adding a needed box of blood for one stop and a crew of F-16 mechanics to another. Each time the phone rings, the mission can change.

&#8220;The Sherpa is the aircraft that can,&#8221; said Lt. Col. Steven Campfield, commander of the 6th Battalion, 52nd Aviation Regiment, which includes the Sherpa company. &#8220;I would say the Sherpa has been the workhorse in this theater.&#8221;

It moves critical supplies such as blood, repair parts and ammunition to anywhere with an airstrip.

For safety, pilots fly low and fast, racing along at 200 miles per hour, 100 feet above ground or occasionally lower.

Danger in a tin can

Back in the States, Sherpas have the same mission, moving small groups of people and medium-size cargo loads.

The threats, surface-to-air missiles, small-arms and indirect fire, force pilots to fly in a safety zone barely off the ground, a place many pilots have flown before.

At a low altitude, pilots use vision, not instruments, to navigate. Pilots and crew stand constant watch for wires, towers, hapless birds and anything suspicious on the ground.

Very few Sherpas have been attacked and none have been hit. The speed and low flights mean that by the time the enemy sees the plane, it&#8217;s gone.

It&#8217;s often the more banal obstacles that are a concern.

And unlike during higher-elevation flights, crews can never take a breather and rely on autopilot.

On hot days, the cockpit can reach 130 degrees and the heat causes greater turbulence.

Out of the sky

Sherpas belong to the Army National Guard. They&#8217;ve been in use in the States for more than a decade but are now proving their mettle.

In the 1980s, Congress bought 12 from a company in Northern Ireland. The Army tried using them, then handed them to the National Guard. Congress bought a total of 44 for the Guard after they proved effective in moving people and cargo in the United States.

They served a limited role in the Persian Gulf War, moving cargo in the rear. For Operation Iraqi Freedom, they were brought in to Kuwait to take some burden off other means of transportation, Chrisenberry said.

To cut flying time and distance, the unit moved this year to Balad, a more central city in the country. From the hub there, pilots circle out to local airstrips, from Mosul in the north to Kuwait in the south.

The C-23 can move quickly around the theater and provide similar supply capabilities as the CH-47 Chinook.

Sherpas move about a half million tons of cargo a month and have ferried 9,000 people in six months, Campbell said.

In July, with a day&#8217;s notice, the company raced blood and ammunition to Fallujah to replenish Marines fighting there.

Not built for looks

Most people are surprised when they see the boxy prop.

The planes, all about 20 years old, are made of aluminum boxes welded together. Inside, the ceiling is 6 feet high. They&#8217;re made cheap and are perfect for cargo.

For passengers, the ride can be uncomfortable, particularly in summer when turbulent air builds at low levels, giving it more of a roller coaster ride than a cruising plane.

The ride might be exhilarating or dreadful, depending on your constitution, but the aircraft is certainly memorable. So, too, is its function.

And it&#8217;s likely to play a role in the Army&#8217;s future inner-theater, midsize transportation plan.