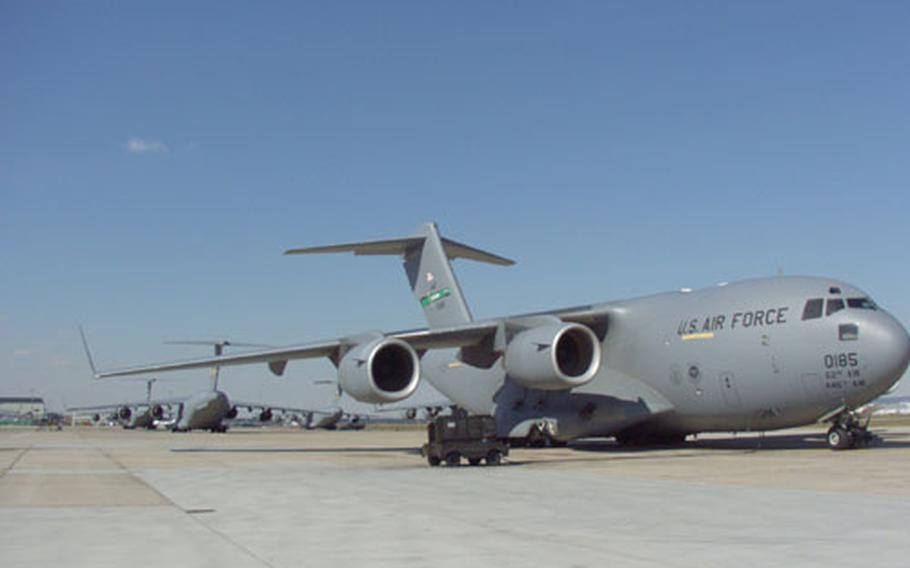 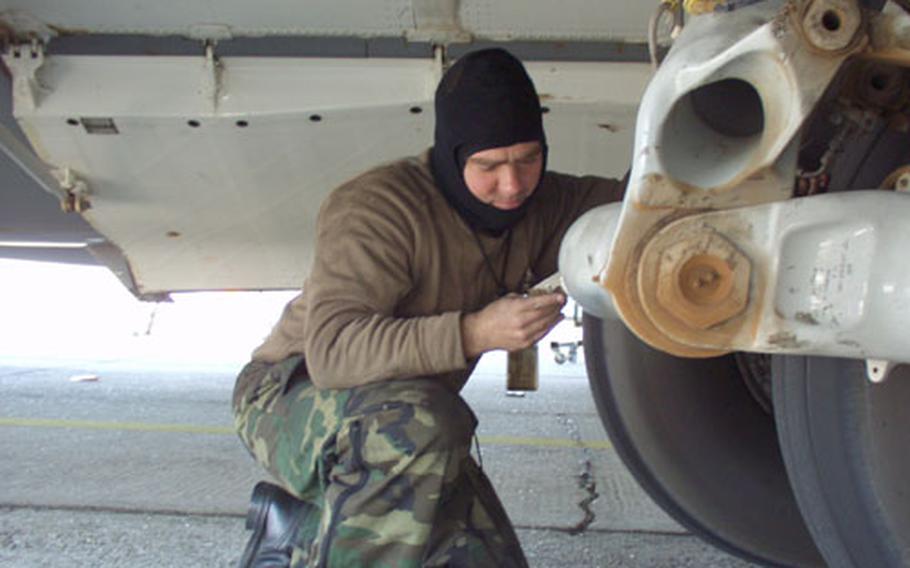 Senior Airmen Joshua Drakos, on temporary duty from McChord Air Force Base, Wash., helps the 726th Expeditionary Air Mobility Squadron out of Rhein-Main Air Base inspect all C-17 aircraft that come onto the flight line prior to missions downrange. (Jessica Iñigo / S&S)

RHEIN-MAIN AIR BASE, Germany &#8212; Rhein-Main set a new Air Force record for launching C-17s when more than 750 Globemaster IIIs took off from the base in March.

Because of the war in Iraq, operations in Afghanistan and elsewhere in Southwest Asia, Rhein-Main has served as a key base for planes passing through. That has kept the approximately 700 members of the 726th Air Mobility Squadron and the 817th Expeditionary Airlift Squadron very busy.

The squadrons, which make up the 362nd Aerospace Expeditionary Group, pushed 758 C-17s through the base aircraft departures in March, beating out the previous record set a month earlier.

During a 60-hour-plus work week, squadron members make sure troops, supplies and anything else coming through the base is routed in the right direction.

Lt. Col. Steve Groenheim, commander of the 817th EAS, likens the crews on the ground at Rhein-Main to pit crews at the Daytona 500 &#8212; with airmen speeding through each plane and rolling it out to the runway.

On average, a C-17 is on the ground for three hours and 15 minutes before heading out again, said Lt. Col. David Rodriguez, commander of the 726th AMS.

During this time, fleet services handles waste, maintenance technicians and supervisors check the plane, the maintenance control center calculates the fuel required, and a transportation team loads and unloads cargo.

&#8220;Sometimes I find them knee-deep in hydraulic fluid way past the time they should be,&#8221; Rodriguez said.

Overall, including civilian and other military flights, Rhein- Main Air Base has seen nearly 1,000 missions just in March.