C-17 crews are in it for the long haul 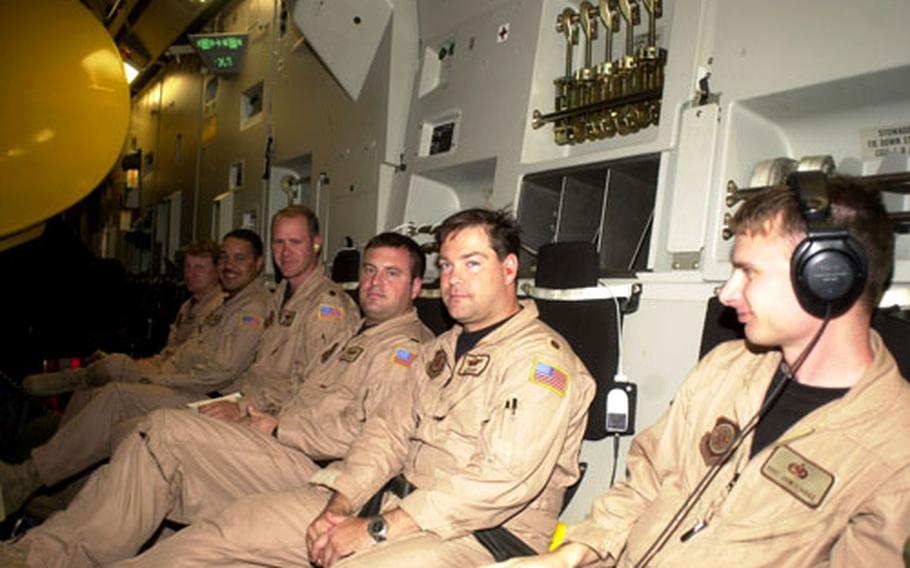 A crew from the 97th Airlift Squadron out of McChord Air Force Base near Seattle commutes twice a month to Frankfurt, Germany, and on from there to Afghanistan and other places in the U.S. military’s areas of operation. (Dale Worley / NATO Allied Land Component Command H.Q.)

If they got frequent flier miles, the C-17 crews from the 97th Airlift Squadron would have enough to buy their own airlines by now, or at least to fly first-class forever.

Every two weeks, squadron crews leave McChord Air Force Base in Washington state and fly to Frankfurt, Germany, via McGuire Air Force Base in New Jersey. From there, they board another flight to &#8220;wherever they send us,&#8221; pick up their own C-17 and fly all manner of missions in one of the U.S. military&#8217;s area of operations, according to Maj. Robert Kubek.

After two weeks flying missions, usually in and around Afghanistan, they head back to McChord.

&#8220;Back in Washington, it&#8217;s three or four days before I feel normal again,&#8221; said Maj. Steve Logan, who like other reservists with the 97th Airlift Squadron, was called to active duty more than two years ago.

The commute, rivaled only by aviators out of California, just comes with the territory of the C-17, based in the United States and &#8220;designed to fly the expanses of the globe,&#8221; as 1st Lt. Jeff Woods put it.

All that flying is one reason why the C-17 usually flies with three pilots. At any one time, one of them might be napping.

The punishing schedule, with the potential for almost constant jet lag, comes with at least one mitigating factor. Sometimes after they return to Washington, if they&#8217;re up to date on all their duties and requirements, the crews are totally, if not blissfully, off work for the next two weeks.

Petro, 40, worked for Federal Express before the reserve unit was activated. Dunlap, who turned 45 on Sunday, was an electrician with the city of Seattle. Logan, 38, is a former, furloughed Delta Airlines pilot. And Kubek, 35, said he mostly &#8220;played golf&#8221; before coming to active duty.

Although each say they certainly see shortcomings in the military, they also say their missions are a valuable contribution.

&#8220;This can be a flying hospital,&#8221; Petro says of the C-17 he was riding in late last month, which, on that flight was filled with water trucks, Bulgarian military officers, a variety of public affairs officers, taciturn &#8220;agents,&#8221; and one U.S. four-star general.

On this particular trip, the Washington crew had hooked up in Frankfurt with Staff Sgt. John Stark, 30, who was to be their mission crew chief. Stark, with the 437th Maintenance Squadron, had had a shorter commute: He&#8217;d come from Charleston, S.C.

So here he was, he said, among the &#8220;long-haul truck drivers.&#8221; But does he really think of himself in those humble terms? Which bring us to the second reason Stark volunteers: