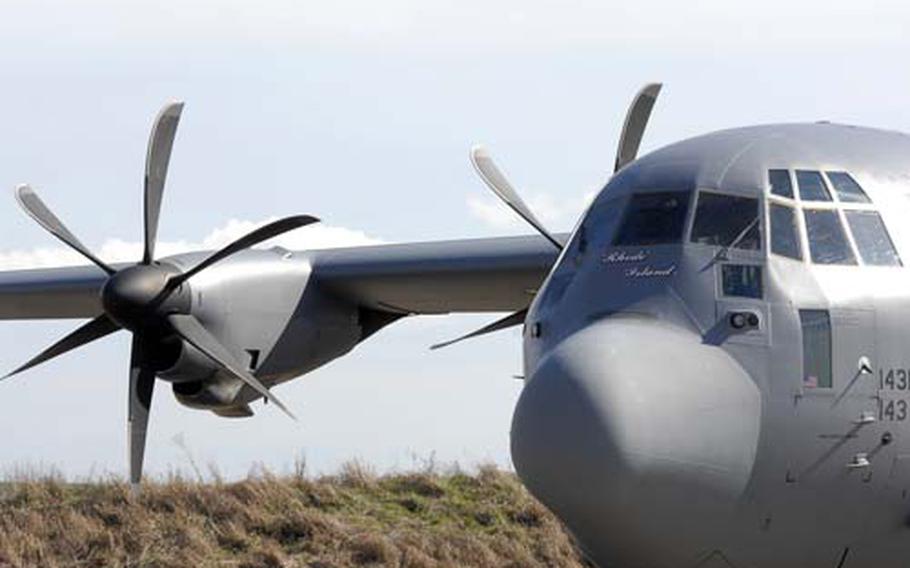 A C-130J airlift plane from the Rhode Island Air National Guard is participating in the military training exercise Operation Thracian Spring 2009 in Bulgaria this week with C-130E crews from the 37th Airlift Squadron at Ramstein Air Base, Germany. (Jennifer H. Svan / S&S)

A C-130J airlift plane from the Rhode Island Air National Guard is participating in the military training exercise Operation Thracian Spring 2009 in Bulgaria this week with C-130E crews from the 37th Airlift Squadron at Ramstein Air Base, Germany. (Jennifer H. Svan / S&S) 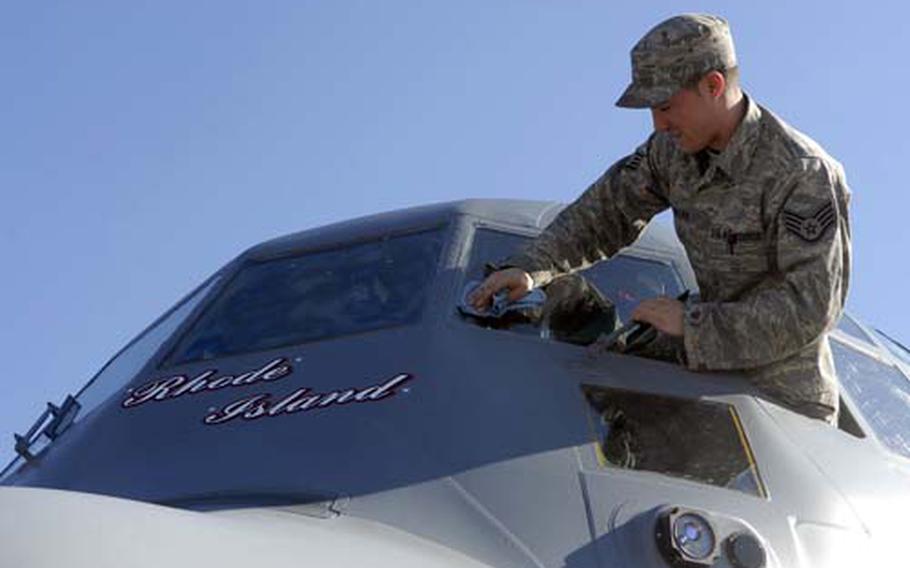 Staff Sgt. Matthew Elderkin of the Rhode Island Air National Guard&#39;s 143rd Airlift Wing cleans the cockpit windshield of a C-130J parked at Bezmer air base in Bulgaria. The guard is training with the 37th Airlift Squadron out of Ramstein Air Base, Germany, and the Bulgarian air force this week and next during the Operation Thracian Spring 2009 exercise. (Jennifer H. Svan / S&S) 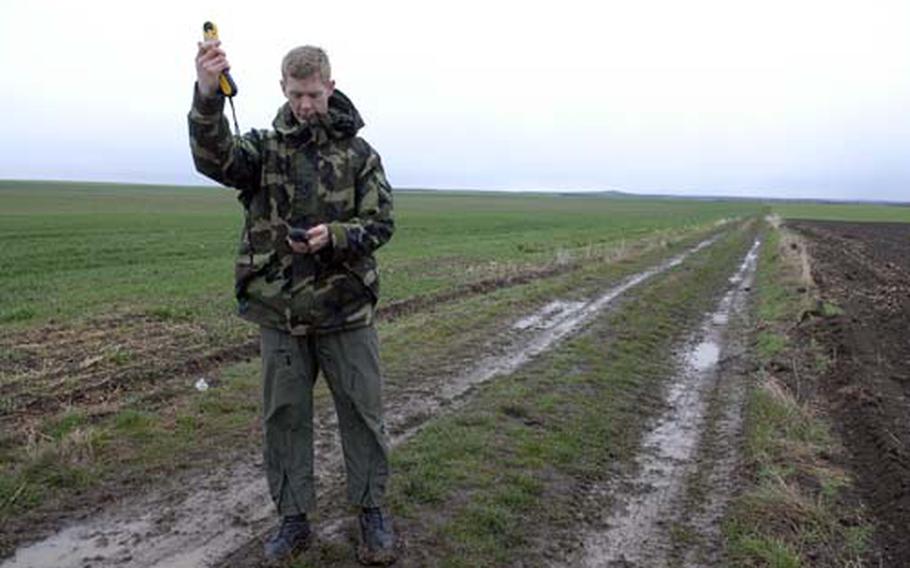 First Lt. Ryan Taylor, a C-130E co-pilot with the 37th Airlift Squadron, checks wind speed and direction in a farmer’s field in Bulgaria. The field was the site of a sandbag airdrop by a C-130E and C-130J aircraft. (Jennifer H. Svan / S&S)

BEZMER AIR BASE, Bulgaria &#8212; As the two gray military cargo jets flew over a farmer&#8217;s field near this base in the country&#8217;s rural southeast, their differences were barely noticeable.

Passing low over their ground target &#8212; a small orange tent billowing in a chilly March wind &#8212; the planes each dropped a 15-pound sandbag from their open rear hatches.

The bags swiftly parachuted to the ground, one landing 70 yards, the other 100 yards, from what airlift crews called the point of impact.

"This could be a combat zone. Thirty yards is nothing," said 1st Lt. Ryan Taylor, a C-130E co-pilot with the Ramstein, Germany-based 37th Airlift Squadron, as he trudged through the drop zone.

The comparison can&#8217;t be helped: The two C-130s participating in the Operation Thracian Spring 2009 exercise in Bulgaria might as well be birds of a different breed.

Though they both performed the mission, one is a 70s-era E-model, a cargo workhorse that has been flying since the Vietnam War era. In the cockpit are two pilots, a flight engineer and a navigator.

The other aircraft is a "J" model, guided by a pilot, co-pilot ... and a computer. The "J" is among the new batch of C-130s that first took flight less than 10 years ago and soon will spread their wings in Germany.

When the 86th Airlift Wing at Ramstein receives its first C-130J Super Hercules in early April, it will become the first active-duty unit overseas to get the planes.

In all, the wing&#8217;s 37th Airlift Squadron is expected to receive 14 "J" models in the next 12 months, fully replacing its "E" fleet, according to squadron officials. Half of the squadron&#8217;s "E" models will retire, and the rest will go to another unit; whether they continue flying is based on number of flight hours accrued, said Lt. Col. Craig Williams, 37th Airlift Squadron director of operations.

Without doubt, the transition to the "J" model will equip the squadron with a superior airframe, according to experienced C-130 fliers.

"I&#8217;ll take this plane any day over the E model in the desert," said Master Sgt. Kyle Gurnon, a C-130J loadmaster from the Rhode Island Air National Guard. "I feel a little safer because we can climb out quicker and it&#8217;s a little faster."

Gurnon, along with three other Rhode Island Air National Guard C-130J aircrew members and 12 maintainers, will spend about a month at Ramstein helping the 37th Airlift Squadron with the transition. Gurnon&#8217;s unit was one of the first to fly the new model.

For Gurnon&#8217;s guard unit, the initial switch to the "J" with two fewer crewmembers in the front of the plane took some getting used to, he said.

"Especially that flight engineer, who was always over the pilot&#8217;s shoulder. If something went wrong in the plane, a lot of times they turned to the flight engineer."

But Gurnon thinks the 37th Airlift Squadron&#8217;s conversion to the new airframe will go well, although it can expect to be busy "because everybody wants this plane in the desert now, wherever the hot spot may be."

But before the aircraft&#8217;s debut at Ramstein, the squadron is getting a chance to work with Gurnon&#8217;s team and its C-130J in Bulgaria this week during the Thracian Spring exercise, which involves the Bulgarian air force and U.S. Air Forces in Europe.

Since it was already in Europe, the guard&#8217;s C-130J was called on to sub for a C-130E, after two of those planes could not participate in the Bulgarian exercise. All C-130 models were ordered to undergo inspections last week on their upper wing joint bolts.

The pairing of the two planes in Bulgaria has inevitably sparked some unofficial competition between the airframes and crews, a friendly rivalry that boils down to human versus computer.

Maj. David Morgan, 37th Airlift Squadron assistant director of operations, said it&#8217;s a matter of pride, since the C-130E has a navigator and the C-130J uses a computer to help the pilot determine the most accurate release point in an airdrop, among other duties. During the exercise, several drops were planned, including the sandbag drops over the farmer&#8217;s field.