C-130 squadron gets a new home at Bagram 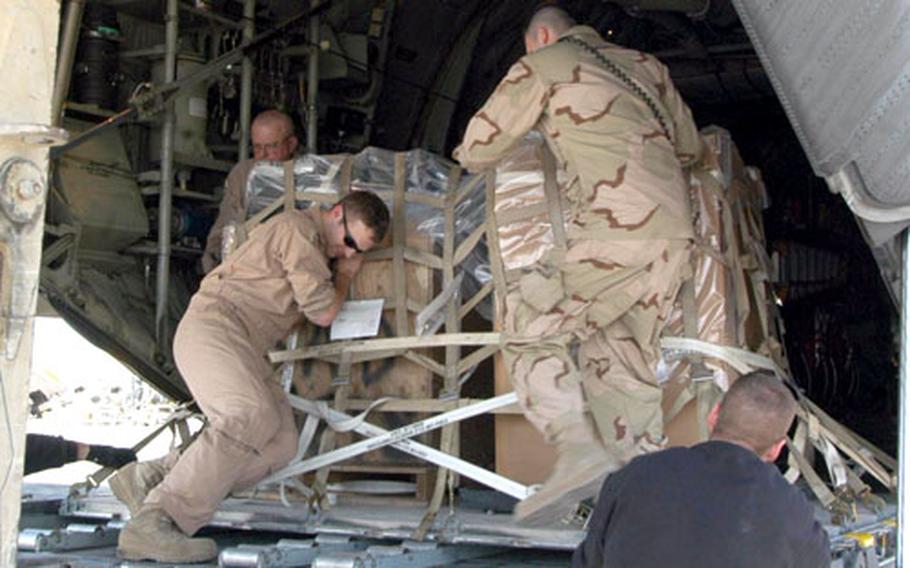 Airmen load a C-130 from the Missouri Air National Guard at Bagram Air Base, Afghanistan, on Tuesday. The cargo plane is one of six currently based at Bagram, with planes and crew rotating in from the States. The 774th Expeditionary Airlift Squadron relocated to Bagram a little more than a month ago, and it’s the first time the U.S. has had such a squadron based in Afghanistan. (Kent Harris / S&S)

BAGRAM AIR BASE, Afghanistan &#8212; C-130 transport planes have been flying in and out of this country since almost the beginning of the invasion.

But it wasn&#8217;t until recently that a squadron of the aircraft could call their own spot in Afghanistan home. That changed a little more than a month ago with the relocation of the 774th Expeditionary Airlift Squadron to Bagram Air Base.

Lt. Col. Ken McDaniel, squadron commander, said the latest move &#8212; the seventh the squadron has made since 2003 &#8212; brings it closer to the ground troops who are the main customers.

Crews and planes can make more trips because a step has been taken out of the journey, he said. Instead of starting a mission outside the country, stopping at Bagram and then heading somewhere else in the country, the planes just load up and head out.

&#8220;It was 2&#189; hours getting here before you even started your mission,&#8221; said Master Sgt. Robert Tanner, a loadmaster who knows a little about flying around in C-130s in the theater. Tanner is serving his seventh tour in the theater and also has deployed twice to Iraq. He&#8217;s been based at every one of the squadron&#8217;s locations &#8212; likely the only one who can claim that.

Many of the Air National Guardsmen and their aircraft have been deployed to the various locations the squadron has called home multiple times. The rotations haven&#8217;t really been tied to the Air Force&#8217;s four-month Air and Space Expeditionary Force rotations, but that&#8217;s also changed recently.

McDaniel, from the Missouri Air National Guard, said he doesn&#8217;t think the squadron&#8217;s Air Guard makeup is likely to change any time soon. And he thinks it might have finally found a permanent home, more or less.

However, getting office and living space on the crowded Air Force compound at Bagram has been a challenge, he said. That&#8217;s easing a bit with the addition of a handful of metal living structures. They&#8217;re currently going up across the street from the entrance to the compound.

Some of the airmen are probably familiar with the structures, because the squadron used to call the base known as K2 in Uzbekistan home before it and other American assets were asked to leave by the host nation last fall.

The 774th then moved to Manas Air Base in Kyrgyzstan for a few months before making the transition to Bagram shortly before McDaniel took command in early January.