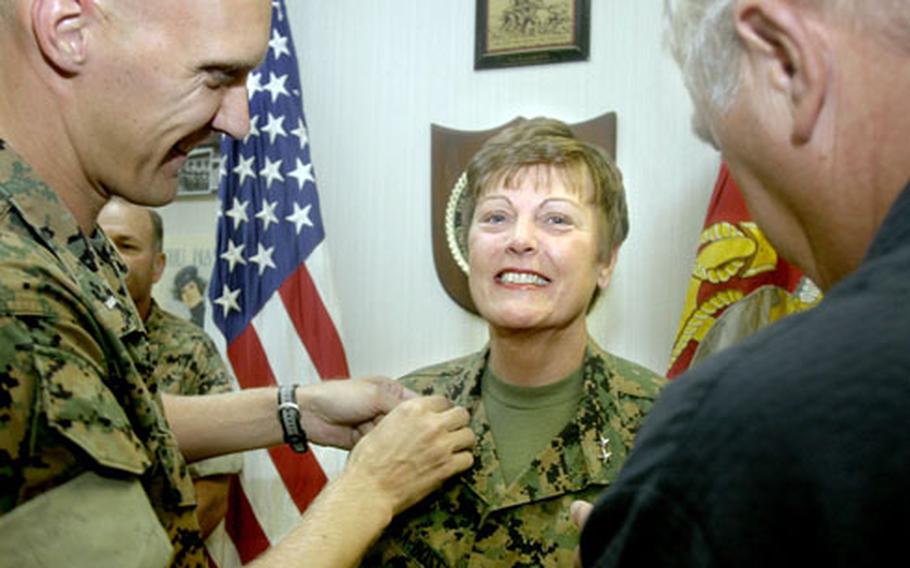 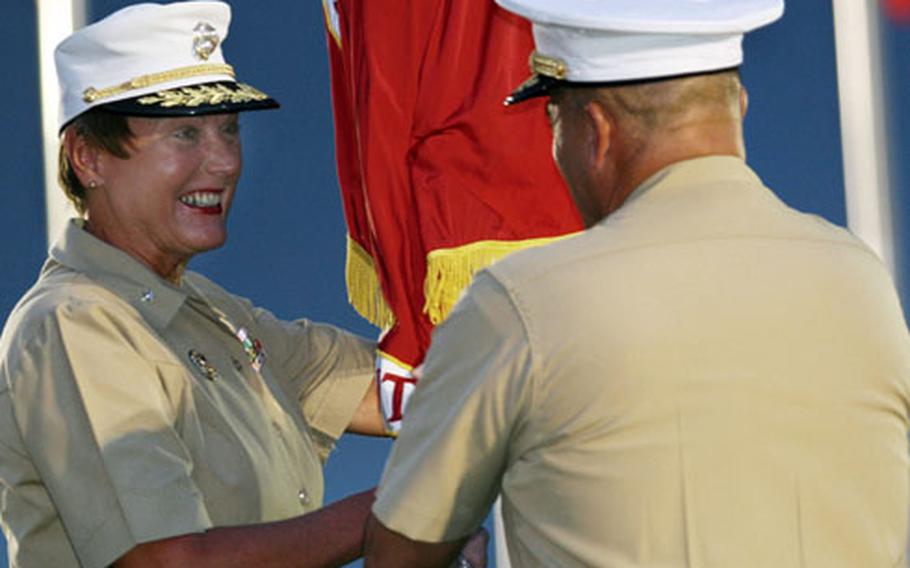 When she became a Marine in 1975, opportunities were just starting to open for women in the Marine Corps.

And at the time, the highest rank a woman held in the Corps was colonel.

She&#8217;s now the highest-ranking female Marine in the Pacific. But she remembers helping her sister in a Chicago ladies dress shop after college and hating it.

"I realized I did not want to be surrounded by four walls &#8212; like I am now," she said, laughing in her office on Camp Foster where she is Marine Corps Base Camp S.D. Butler&#8217;s commander. "I needed a bigger challenge."

In 1975, the Marines opened all but infantry, armor, artillery and pilot/air crew careers to women. So Krusa-Dossin, whose father had been a Marine Raider in World War II, became one of the first six or seven female military police officers.

They weren&#8217;t welcomed with open arms, and it didn&#8217;t take long for most to move to other jobs, said Krusa-Dossin.

"One of the reasons was because of all the crap that they took," she said.

She fought the attitudes that men wouldn&#8217;t listen to female leaders and that women weren&#8217;t capable of leadership. She persevered through sheer stubbornness. "The more they tried to do, the more pissed I got and I wasn&#8217;t about to budge," she said.

Krusa-Dossin remembers after her first assignment, she was going to be provost marshal for Camp Smith, a small base in Hawaii. But the commander there had a "hard time" with the idea of a woman provost marshal. She didn&#8217;t end up with the assignment.

"Every issue was a battle and we just forged on," she said of her fellow female Marines at the time.

As one of the first Marines allowed to remain in the Corps after she became pregnant in 1980, Krusa-Dossin said she had to teach male Marines how to deal with pregnant Marines.

Pride evident in her voice, Krusa-Dossin said she never missed a day of work when she was pregnant, which she said went a long way in helping change men&#8217;s attitudes about women Marines in similar situations.

"They learned being pregnant is not a sickness or physical disability for most women," she said.

The Marine Corps has come far in how it supports mothers, Krusa-Dossin said, mentioning current support programs such as Visiting Nurses and Baby Bootcamp.

The first Marine general officer of any sex from the MP field and the first general officer to be a mother, Krusa-Dossin said female Marines have a lot more opportunities now.

But she wanted to make one thing clear: Female Marines do not have to act like men to succeed.

"We bring a level of compassion, we bring emotion to the table," she said. "We say not everything is black and white and can look at further projections of decisions."

They also bring toughness, she said.

"Women have proven their courage time and time again in Iraq and Afghanistan," she said. "Courage and bravery is not defined by gender."

But Krusa-Dossin said there&#8217;s still progress to be made. Currently, women represent about 6.5 percent of the Marine force. And Krusa-Dossin is one of only six female generals in Marine Corps history. Three are still on active duty.

"It&#8217;s not representative enough," she said. Still, "the future is pretty darn bright."

Firsts for women in the Corps1918 &#8211; Pvt. Opha Mae Johnson enlists in the Marine Corps Reserve.

1992 &#8211; Brig. Gen. Carol A. Mutter becomes first woman to take flag-level command of a Fleet Marine Force when she assumescommand of the 3rd Force Service Support Group on Okinawa.