Busy or bored: Six months on an Iraqi oil rig 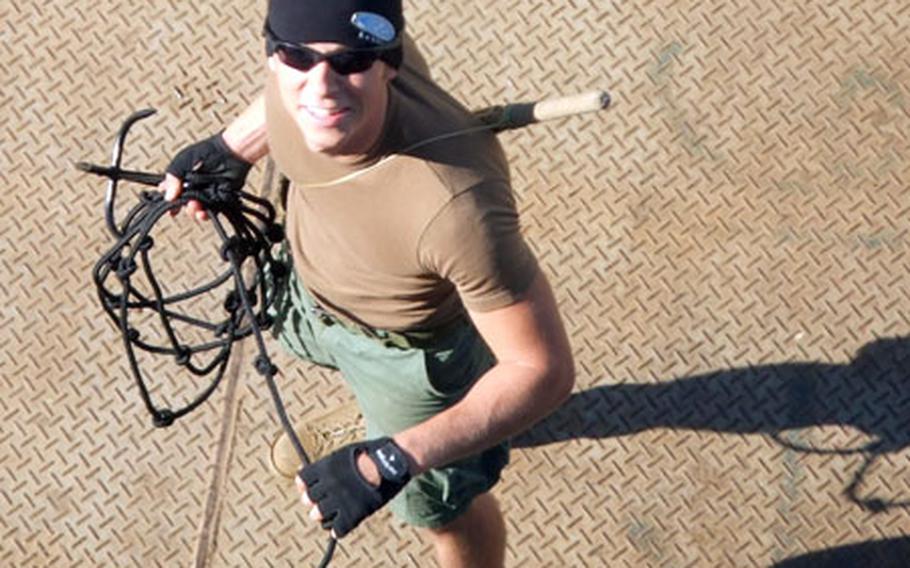 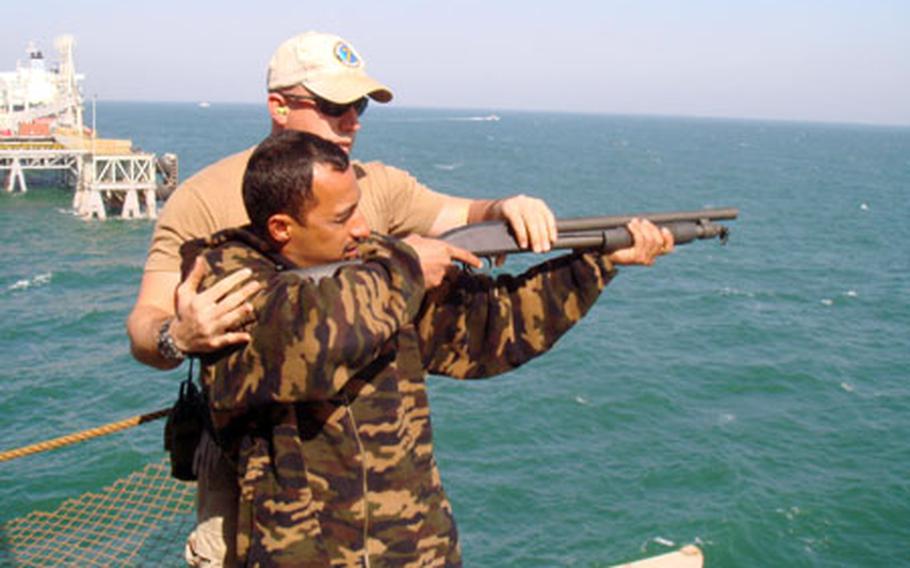 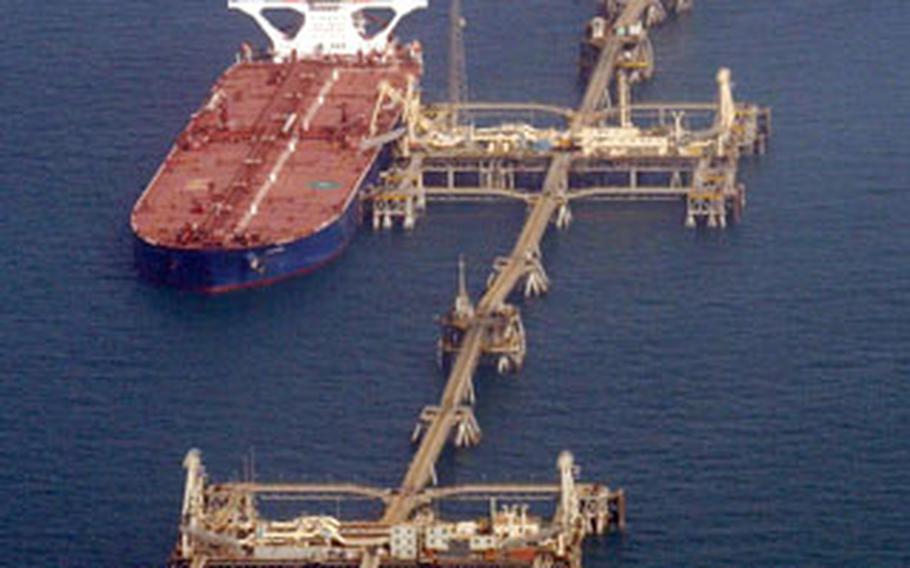 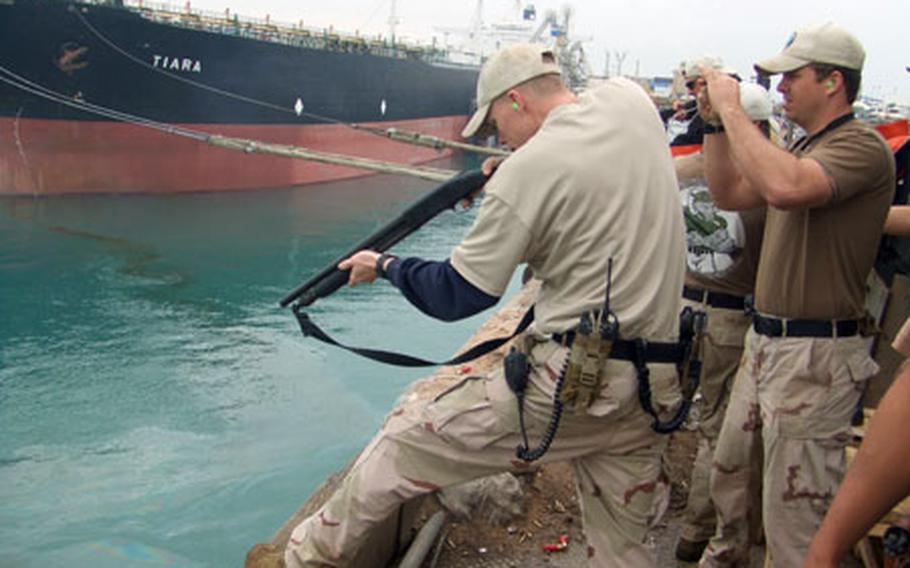 Jeffrey Simpson, a master-at-arms, shoots an M-500 shotgun from the Iraqi oil terminal Basra during routine target training in February. More than 60 sailors from Mobile Security Squadron 7, Detachment 73 at U.S. Naval Base Guam were deployed to the northern Persian Gulf from September to March to help train Iraqi marines in protecting two offshore Iraqi oil platforms. (Courtesy of U.S. Navy) 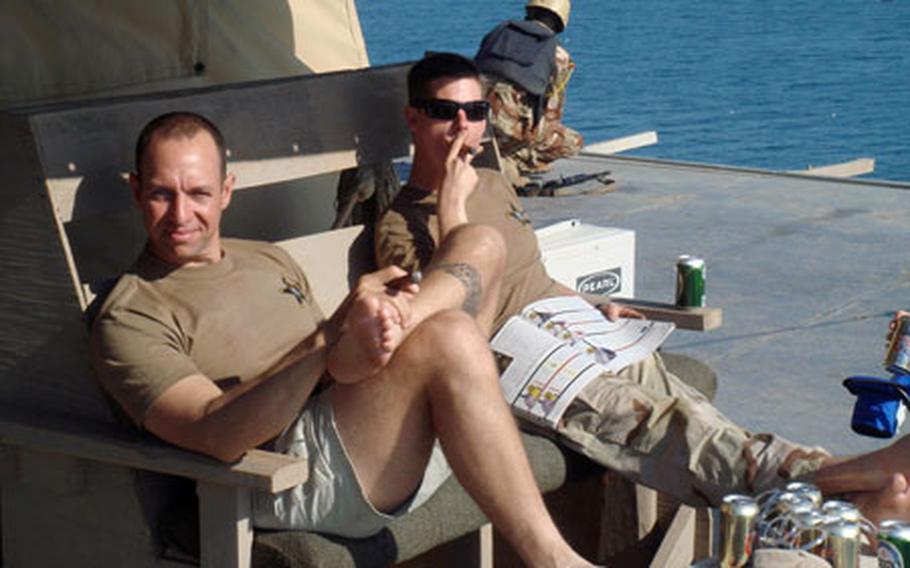 Lt. Aaron Bergman, left, and Petty Officer 2nd Class Christopher Tindell, a master-at-arms, both with Mobile Security Squardon 7, Detachment 73, take a break from duties as an Iraqi marine mans his post in the background on the off-shore Iraqi oil platform Basra. Cigars, non-alcoholic beer and magazines were among the few amenities available on the oil platforms. (Courtesy of U.S. Navy)

Six months is a long time to live in a shipping container on a giant steel grate at least 85 feet above the ocean.

That&#8217;s a lot of metal, a lot of salt, a lot of sun, and why sailors with Mobile Security Squadron 7, Detachment 73, at U.S. Naval Base Guam are happy to be home.

But despite the austere living in the northern Persian Gulf, there was something special about the deployment, the sailors said, because of the importance of the mission and camaraderie that grew from toughing it on an oil rig 14 miles out to sea.

More than 60 sailors deployed with the squadron in mid-September &#8212; mostly masters-at-arms but also a few gunner&#8217;s mates and two corpsmen. Half returned March 24, and the rest arrived on Guam on Friday.

Their job was to train Iraqi marine platoons in guarding Iraq&#8217;s two off-shore oil terminals, Basra and Khwar Al Amaya, said Navy Lt. Aaron Bergman, the squadron&#8217;s officer in charge, in a phone interview from Guam on Monday. They also were there to back up the Iraqi marines if the platforms were attacked, Bergman said.

Then there was the business of living.

Food, picked up regularly in Kuwait by small boat, was easier to come by than water.

Indeed, water was everywhere, but was only drinkable after a process to remove the salt.

Maintaining those reverse osmosis pumps &#8212; one on each platform &#8212; was almost a full-time job in itself, Bergman said.

Life on the platforms was an uneven rhythm of 18-to-20-hour workdays interspersed with the occasional &#8220;absolutely nothing to do,&#8221; Bergman said.

Chaney was on the sea marshal team, which boarded oil vessels to check clearance and sweep for explosives, riding the ship until it moored at the platform.

Under the Guam sailors&#8217; watch, about 13 billion barrels of fuel was pumped from the platforms, Bergman said.

Chaney said the deployment taught him to appreciate his life more &#8212; and not just because his shipping container was stacked three-high, 140 feet above sea water.