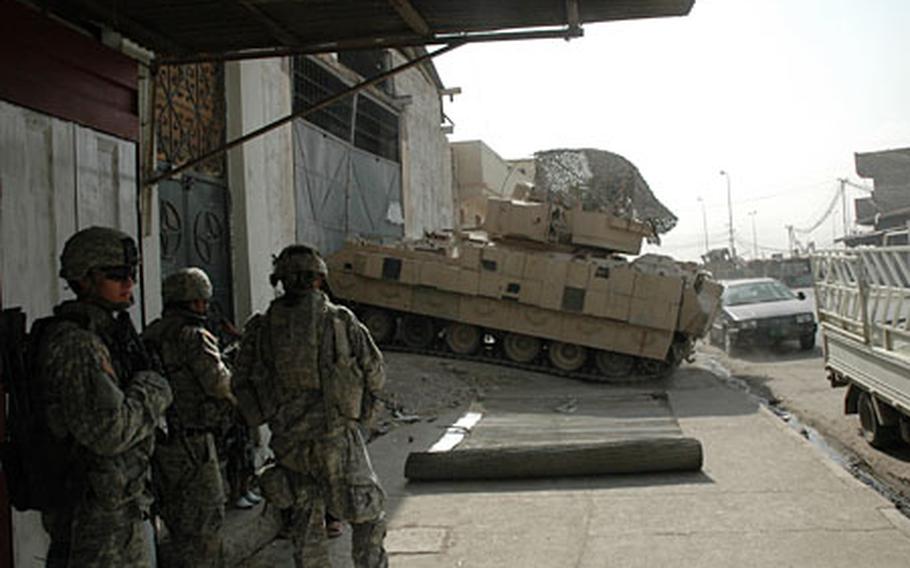 The owner of the business said he was hiding the thick wads of large-denomination bills from his wife, said the 2-7&#8217;s commanding officer, Lt. Col. Eric Welsh, 42, of Hershey, Pa.

The war in Iraq is often viewed as an ideologically fueled conflict with insurgents fighting for religious, sectarian and political causes. But soldiers with the 2-7 have discovered that, at least in Mosul, the driving force behind hostilities is often considerably baser.

During their effort to target the financiers of the insurgency, soldiers have stumbled onto an underworld of nefarious schemes that calls to mind the ruthlessness &#8212; and ingenuity &#8212; of crime syndicates around the world.

Organized crime is nothing new in Iraq. Smuggling has long been an intrinsic part of Iraq&#8217;s black market economy, most notably under Saddam Hussein. Many of these criminal networks have not gone away, but have simply adapted to new conditions since the arrival of American troops.

For racketeers in Mosul, the price of doing business now typically includes paying a percentage to insurgent fighters and nominally becoming part of the anti-Western movement. But ultimately Mosul&#8217;s &#8220;white collar&#8221; criminals are devoted to profits and not causes, Welsh said.

Well-covered tracksSoldiers with the 2-7 began a concerted effort to target the financiers of the insurgency in April, unit leaders said.

Unit leaders felt it was not enough to target those who built and placed roadside explosives, but also those who funded the threat.

As Welsh often points out, his is the only battalion assigned to a city with 1.8 million to 2.5 million inhabitants.

And the racketeers will make sure that their scams are well hidden, their tracks are covered and, even when the heat comes down, that they are found holding nothing incriminating.

But persistence has begun to pay off, 2-7 unit leaders said. The Iraqi security forces in the area have helped several investigations with their cultural and societal expertise, they said.

Criminals &#8220;reveal things to Iraqi interrogators that they would never tell us,&#8221; Welsh said.

Cement scamWith several investigations still open, Welsh said he could not reveal the names of the detainees he has taken into custody. But he did share details of some of the criminal enterprises brought down in the last few months.

When the man was apprehended, he was carrying a check for more than $130,000 and had hundreds of thousands of dollars more in several bank accounts.

With his connections to al-Qaida in Iraq, the man had muscled into a job as a middleman for the government-owned cement factories. He arranged for contracts with little to no documentation so there would barely be a paper trail leading back to him, Andrews said.

He would sell cement at an inflated price to contractors while getting the resource at a discount from the factories. He pocketed the difference and was making roughly a $100,000 a month, Andrews said.

Soldiers would not reveal what led to the man&#8217;s arrest, saying only that &#8220;human intelligence&#8221; contributed to the investigation.

During questioning, the man said that he paid his al-Qaida benefactors by depositing money into a bank account. After that, he said, he did not know where the money went, Welsh said.

Real estate racketA second recent arrest involved a racketeer tapping into another government-run enterprise. There is a lot of money to be made buying and selling real estate in Mosul, one of the country&#8217;s largest cities, Welsh said.

Soldiers detained an employee with the government real estate office who was illegally selling properties and pocketing the money. The man would alter the deeds of government-owned properties and sell them as privately held lots.

Again, 2-7 unit leaders would reveal little of their investigatory process but when the man&#8217;s home was searched, a ledger detailing his illegal transactions was found under a baby&#8217;s crib, Welsh said. The real estate employee had recorded transactions totaling billions of Iraqi dinars in the ledger.

Apparently, racketeers have taken note of the Americans&#8217; reluctance to search women and children and have tried to take advantage, Andrews said.

The captain recalls that in another case, a female soldier searched a woman and found she had hidden a cell phone and money underneath her breasts. &#8220;She was a very large woman,&#8221; Andrews said. Racketeers &#8220;are great at hiding stuff, their caches are some of the most incredible things,&#8221; he said.

Kidnapping targetedSoldiers with the 2-7 have recently broken up a kidnapping ring. Victims from some of the wealthier families of Mosul were chained by their hands, feet and necks as the kidnappers waited to collect ransoms that often ran upward of $250,000, Welsh said.

The unit has also turned its attention to several car dealerships that may be selling stolen cars and providing vehicles to bomb makers, Welsh said. After soldiers recently showed up at one suspect dealership, the owner closed it down, he said.

And the owner of the propane factory who claimed to be hiding a small fortune in coffee cans from his wife turned out to be selling propane and fuel on the black market, according to 2-7 leaders.

The man would make fake identification cards to falsely claim rations of propane, which he would in turn sell.

Welsh said that the sale of propane and fuel on the black market funnels about $1 million a month back to the insurgency.

The owner was also providing materials for the building of bombs as well as providing fuel to insurgents, Andrews said.

With all the money the United States is pumping into the rebuilding of Iraq, Welsh said he would be surprised if some of the funds did not find their way into the hands of criminals.

But generally, he said, it is a lot easier for the racketeers to make money on scams that do not include American oversight, inspection and possible intervention.

Since April, unit leaders estimated they have arrested from 20 to 30 swindlers and insurgent financiers.

As scams are put out of business, insurgents are pressured to find money in other places, Welsh said.