Businesses near Humphreys shut down in protest of Taliento 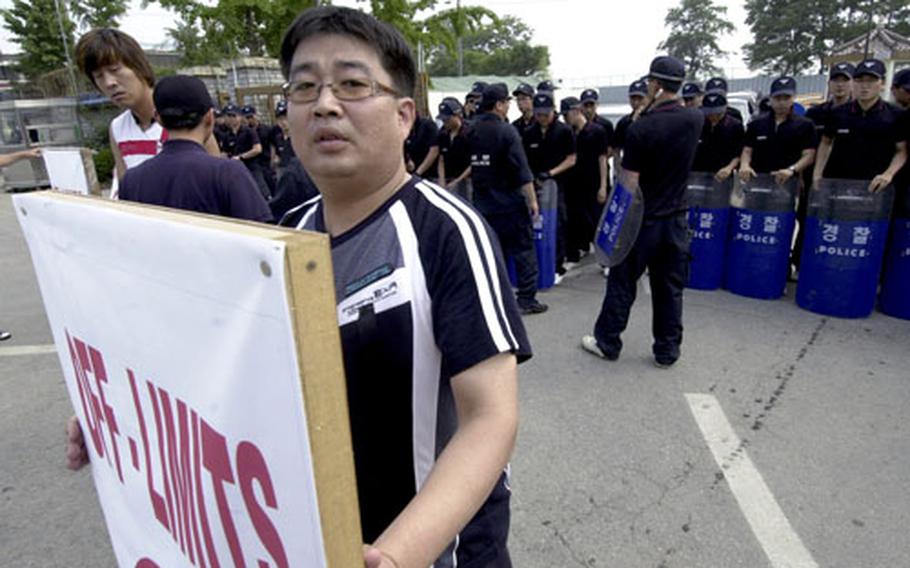 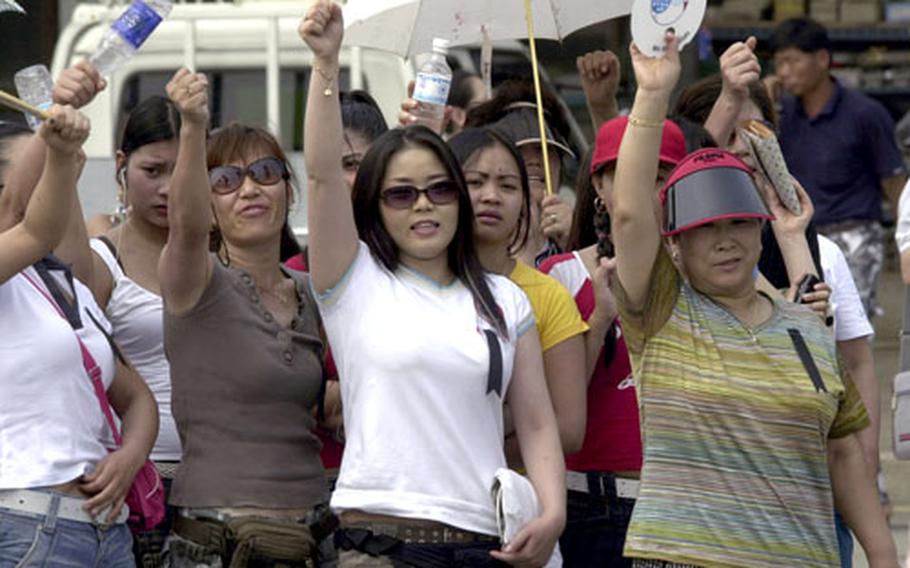 Members of the local bar and club community protest outside of Camp Humphreys on Tuesday. (T.D. Flack / S&S)

ANJUNG-RI, South Korea &#8212; Merchants near Camp Humphreys said Tuesday they have closed their bars and clubs until further notice and will hold daily protest rallies to show their disapproval of Army Col. Michael J. Taliento Jr., the Area III commander.

The merchants contend Taliento has been overzealous in enforcing a rule that allows U.S. military commanders to put a local bar off-limits on credible evidence that it&#8217;s selling alcohol to underage U.S. servicemembers.

The merchants are owners of bars and clubs in Pyeongtaek&#8217;s Anjung-ri section, which includes an entertainment district that caters mainly to U.S. servicemembers.

On Tuesday the merchants released a four-page letter that accuses Taliento of behaving like the governor of an occupying force and calls for his removal.

Taliento on Monday said he understood how his position as Area III commander could make him an object of the merchants&#8217; anger. He also said that enforcing USFK policies is part of his duty, and that he lacks the authority to override them.

In the two-year period since Taliento became Area III commander at Camp Humphreys, &#8220;a growing rift&#8221; has occurred, the letter said.

&#8220;The mentality of Commander Taliento &#8230; is quite different from other commanders whom we witnessed over the past times,&#8221; the letter said. &#8220;His behaviors are like a governor in the occupation army, rather than a brilliant and respectable military leader.&#8221;

The merchants contend that in 12 off-limits actions during Taliento&#8217;s tenure so far, a total of 30 establishments have been banned to servicemembers.

&#8220;The financial loss resulting from the repeated measures at last comes to a crunching point now,&#8221; the letter said.

The letter complained about the use of U.S. military undercover agents who have mounted sting operations to test whether a club is selling alcohol to underage servicemembers.

And it expressed resentment that the measures had been taken despite the strong public support the merchants have given to a plan to expand Camp Humphreys into the U.S. military&#8217;s main base in South Korea.

Merchants have organized several pro-U.S. military rallies in Anjung-ri and have voiced support for the expansion, which will see Camp Humphreys triple in size. Anti-U.S. activists have staged frequent rallies, some of them violent, in opposition to the expansion plan.

The merchants Tuesday issued a separate statement addressed to USFK servicemembers that reads, in part:

One local businessman voiced disapproval of the merchant&#8217;s actions.

T.D. Flack and Hwang Hae-rym contributed to this report.