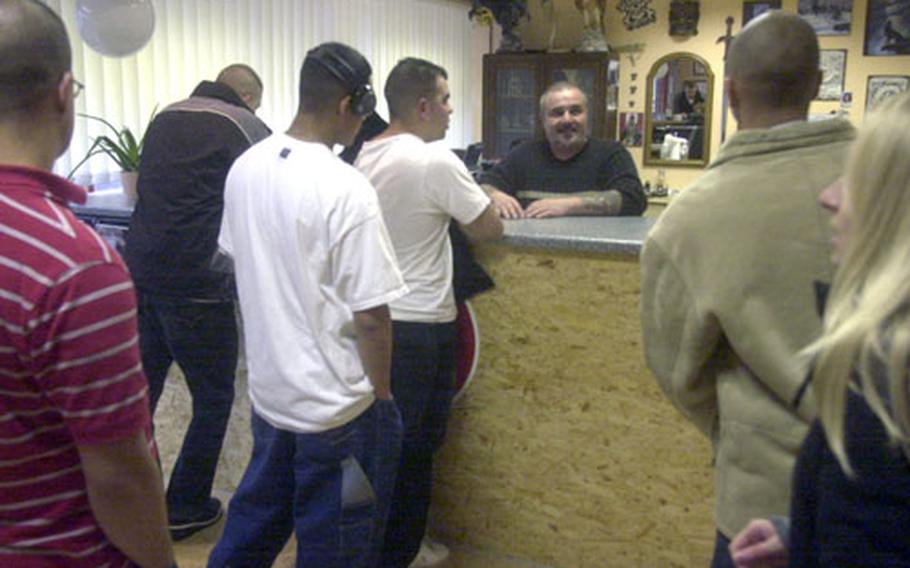 Soldiers line up at Jörg’s Tattoo and Piercing Studio on Monday afternoon in Baumholder, Germany. With the recent return from Iraq of about 4,000 soldiers, business has increased steadily in Baumholder, and German police have seen little trouble. (Steve Mraz / S&S)

BAUMHOLDER, Germany &#8212; Business is booming, and the troops are behaving now that the roughly 4,000 soldiers of Baumholder&#8217;s 2nd Brigade Combat Team have returned from Iraq.

Aside from one alcohol-related fight, the returning soldiers have caused few problems, and things have been quiet, said Siegfried Meyer, chief of the Baumholder police.

The small German town west of Kaiserslautern is heavily dependent on the presence of Americans, and relations were strained in the summer of 2005 when a small group of soldiers &#8212; preparing to deploy &#8212; beat up a cab driver and torched the Baumholder city hall.

Now with the soldiers back, German police are conducting night patrols with Army military police and Criminal Investigation Command personnel, Meyer said. Over the holiday weekend, German police stopped cars &#8212; looking for alcohol or drugs &#8212; and found nothing, Meyer said. Also, U.S. courtesy patrols are giving rides home to soldiers who have had too much to drink, and soldiers are being told they must be in groups of at least three to go downtown.

Since the unit returned to town, several businesses have seen a dramatic upswing in customers. Block leave doesn&#8217;t start until early December, so soldiers who have finished the seven-day reintegration program are left waiting in Baumholder.

At J&#246;rg&#8217;s Tattoo and Piercing Studio, several soldiers flipped through tattoo catalogs Monday afternoon while others waited in line to ask about prices. In the weeks since the soldiers began returning, appointments are now booked three weeks out, said Dennis Whitson, who does piercings at the downtown Baumholder studio. Usually, appointments are booked for only one week, he said.

The soldiers are getting tattoos with bullets, names of friends who died, eagles and American flags, he said.

Ed Lewis, a soldier who just returned from Iraq, was at the studio to inquire about getting more tattoos on his arms. Lewis plans to cover his right arm in &#8220;good&#8221;-themed tattoos while his left arm will have &#8220;evil&#8221;-themed ink artwork.

On the Baumholder post, Exchange New Car Sales has sold between 40 and 50 new cars in the past 10 to 15 days, said David Barker, exchange relations manager. The best sellers have been the Dodge Caliber, the Jeep Compass and the Ford Mustang, he said.

Sobhi Thaer, who runs an off-post d&#246;ner kebab shop, has seen his business increase by three to four times in recent weeks.