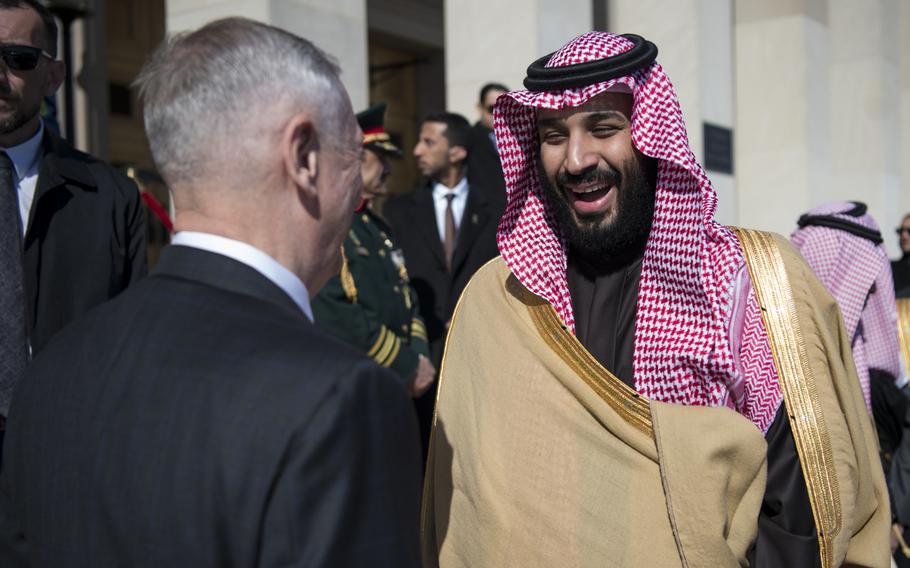 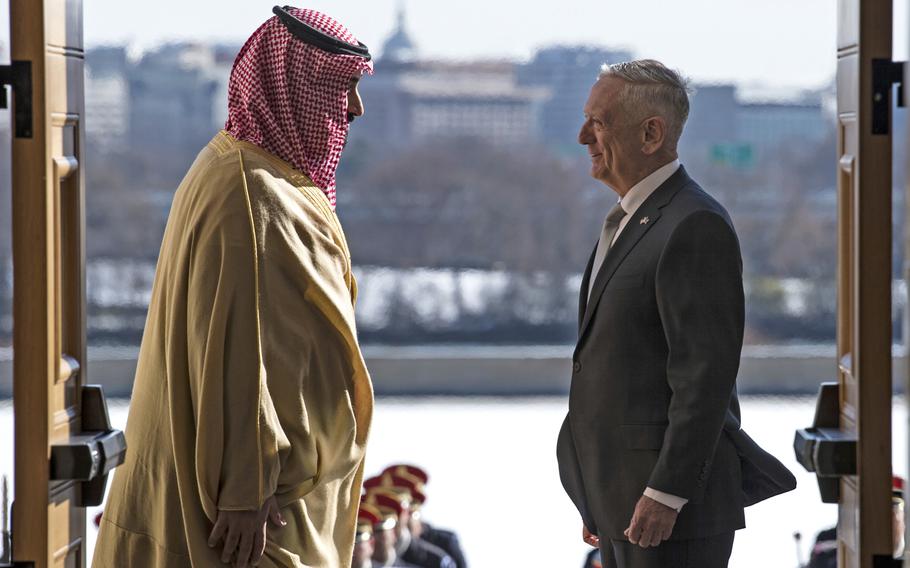 Money and military hardware have continued to flow between Riyadh and Washington in the weeks since the Oct. 2 killing of Washington Post contributor and U.S. resident Jamal Khashoggi, despite calls in Congress and elsewhere for a halt in arms sales to Saudi Arabia.

At least nine contracts on behalf of Saudi Arabia have been announced by the Defense Department since the day Khashoggi is alleged to have been killed and dismembered inside the Saudi Consulate in Istanbul, a Stars and Stripes analysis of publicly announced defense contracts found.

Although some have been modifications of existing contracts, renewals or extensions, the deals have sent military hardware like essential parts for anti-ship missiles and surface combatant ships to Saudi Arabia.

The number of contracts is on par with monthly averages spread out over the past year, indicating business as usual between the two countries despite the journalist’s death.

President Donald Trump has cited the huge military sales program with the Saudis among reasons to tread lightly in punishing Saudi Arabia for Khashoggi’s death. The U.S. has sanctioned 17 Saudi officials suspected of being responsible for the killing, but members of Congress have called for tougher measures, including canceling arms sales.

A U.S. official familiar with the case told The Associated Press that intelligence officials had concluded that Crown Prince Mohammed bin Salman, the kingdom’s de facto leader, ordered the killing. Others familiar with the case, however, have cautioned that while it’s likely the crown prince had a role, questions remain about the degree.

Regardless of who’s to blame, Trump said Tuesday that “foolishly canceling these contracts” worth billions of dollars would only benefit Russia and China, which would be next in line to replace the U.S. as an arms supplier.

“We may never know all of the facts surrounding the murder of Mr. Jamal Khashoggi,” Trump told reporters Tuesday. “In any case, our relationship is with the Kingdom of Saudi Arabia. They have been a great ally in our very important fight against Iran.”

The most recent defense contract on behalf of Saudi Arabia came Monday, according to DOD’s contract announcement website, three days after the Washington Post reported that the CIA blamed the crown prince for involvement in Khashoggi’s death. The CIA has not made a public announcement.

Long lead materials are essential to build the missiles but take longer to procure, Navy spokeswoman Jamie Cosgrove said. She declined to say what those materials are or how many missiles would go to each customer.

“The supplies and services will be provided directly to the foreign customer by the prime contractor,” she said, adding that the contract will be filled by 2023.

On Nov. 16, the Navy announced a $282 million contract modification for Lockheed Martin, which will send “long-lead-time material and detail design” to the kingdom in support of construction of four Multi-Mission Surface Combatant ships.

The contract, awarded by Naval Sea Systems Command, is expected to be fulfilled by October 2025, the announcement said.

At least five other contracts were awarded on behalf of Saudi Arabia in October following Khashoggi’s death, and one so far in November.

Another contract, a $54.4 million modification for General Dynamics Information Technology Inc. on Oct. 30, extended integrated logistics support for foreign customers who had previously purchased “articles including weapon systems, aircraft, and other components,” according to the announcement.

The rest of the contracts since Khashoggi’s death were spread out among the Army, Air Force and Navy, and included support and upgrades for multiple aircraft and weapons systems.

The military sales program is a “a fundamental tool of U.S. foreign policy,” according to its DOD website.

At least six defense contracts were awarded in January 2018 on behalf of Saudi Arabia, three in February, three in March, six in April, seven in May, three in June, six in July, one in August, and 11 in September. The precise numbers may be incomplete, as several announcements did not name the foreign military sales customers.

Sen. Lindsey Graham (R-S.C.) has been outspoken in his condemnation of the Khashoggi killing and the crown prince for his alleged role in the attack. A spokeswoman for his office declined to comment but pointed to an Oct. 16 appearance on “Fox & Friends” for the senator’s position.

“Nothing happens in Saudi Arabia without [Crown Prince Mohammed bin Salman] knowing it,” Graham said. “I can never do business with Saudi Arabia again until we get this behind us.”

He went on to call for the removal of the crown prince from the royal line of succession.

On Nov. 15, Graham and others introduced a bipartisan bill, the “Saudi Arabia Accountability and Yemen Act of 2018,” which would suspend weapons sales to Saudi Arabia, sanction those responsible for Khashoggi’s death and ensure “effective” congressional oversight of U.S. policy on Yemen, among a host of other requirements.