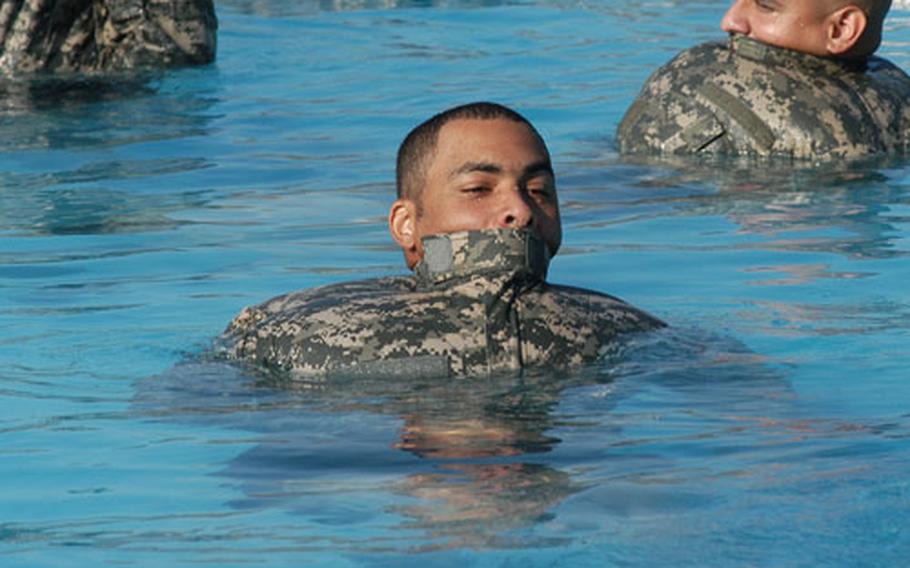 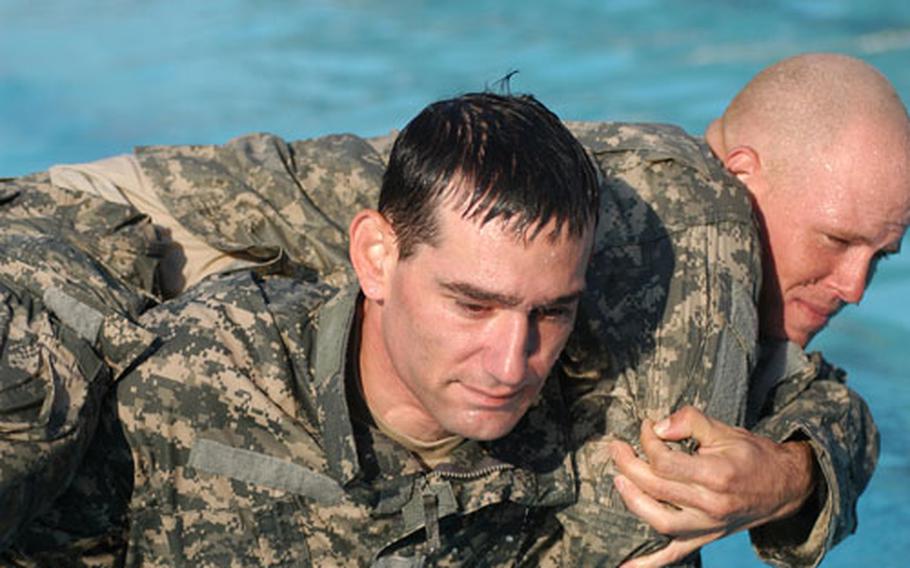 The 2nd Infantry Division soldiers &#8212; mainly from Bravo Battery, the "Bushmasters" of 6th Battalion, 37th Field Artillery &#8212; got a lesson in drown-proofing and combat lifesaving at the Hanson Gym Pool.

Soldiers carried each other overhead through the water and then learned how to use their uniform pants and jackets to float.

"I first did this type on training 20 years ago in the Boy Scouts," said Pfc. Thomas Pappaianni of New York.

Each soldier also did it in basic training, but many said they were glad to get the refresher training. Soldiers who spend their days firing rockets and maintaining launchers don&#8217;t spend much time in the water.

The lesson was part of sergeant&#8217;s time training, which each 2nd ID unit is supposed to conduct every Thursday. The training can include anything from office procedure to weapons functions, or in this case, combat lifesaving.

"We make sure we give them a variety. You can&#8217;t have tunnel vision when it comes to sergeant&#8217;s time training," said 1st Sgt. Kirk Hamlin of Hampton, Va.

Soldiers learned multiple ways to tie off the ends of their jackets or pants, trap air inside them and wrap them around their necks.

Some, like Sgt. Brian Ribbans of Columbus, Ohio, hadn&#8217;t been swimming in a long time.

The last time he had drown-proofing training, soldiers wore the woodland-style battle dress uniform, instead of today&#8217;s Army combat uniform.

It&#8217;s also important because soldiers can easily end up in units outside their specialty, or even outside their military branch, during wartime, said battery commander Capt. Mario Logli.

"They might find themselves on a ship with a Marine unit," said Logli, of Stockport, Iowa. "It&#8217;s better to prepare them now than to set them up for failure in the future."

When they got out of the pool, they received a crash course in recognizing and treating shock, making splints and applying tourniquets.

Shock is one of the most common causes of casualties, said medic Spc. Gregory Morgan. At the very least, a soldier should elevate a shock casualty&#8217;s legs, cover the person for warmth, hydrate the victim and seek medical attention, he said.

While every soldier receives basic first aid training, the Army wants one soldier in every vehicle to have taken a one-week combat lifesaver certification course. But even that may change, medics said.

"The Army is moving toward 100 percent combat lifesaver certification and 6-37 is aggressively pursuing that," Morgan said.