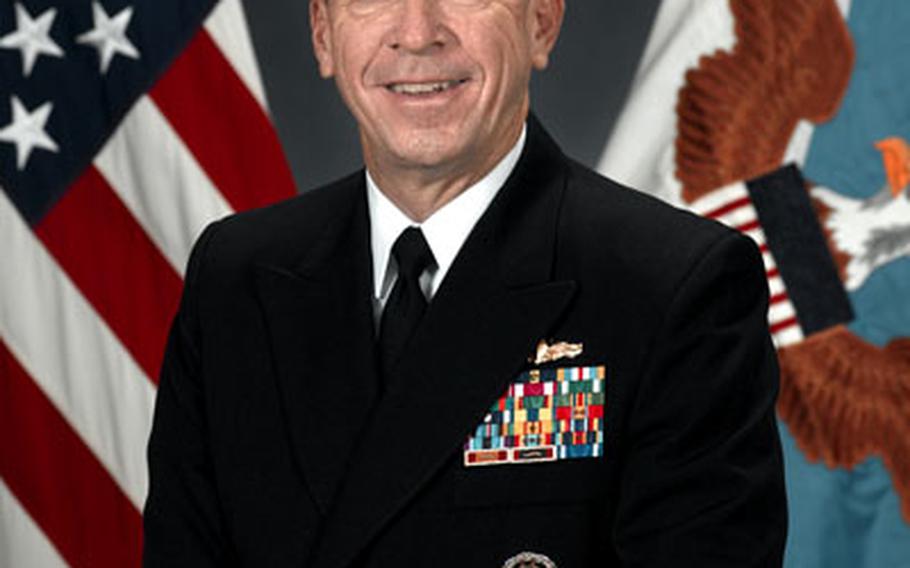 Adm. Mike Mullen is the 17th chairman of the Joint Chiefs of Staff. ()

ARLINGTON, Va. &#8212; Adm. Mike Mullen took the oath as the 17th chairman of the Joint Chiefs of Staff during a formal change of command ceremony Monday at Fort Myer, Va.

Mullen, the former chief of naval operations, replaced Marine Gen. Peter Pace, who is retiring after 40 years of service.

In his remarks Monday, Mullen said he takes his new role with a &#8220;supporting cast&#8221; of 2.4 million servicemembers.

Pace was not renominated to his post to avoid what Defense Secretary Robert Gates thought would be &#8220;backward-looking&#8221; and &#8220;contentious&#8221; confirmation hearings, Gates said in June.

On Monday, Gates recalled how Pace began his career as a second lieutenant in Vietnam during the Tet Offensive and has since become a &#8220;gifted leader&#8221; of all servicemembers.

&#8220;Although General Pace is chairman of the Joint Chiefs of Staff, the most powerful military officer in the world, he still cares for everyone in our armed forces as if he were still their platoon leader,&#8221; Gates said.

In his farewell remarks, Pace thanked all servicemembers &#8212; both active and Reserve.

Mullen, who graduated from the U.S. Naval Academy in 1968 and went on to command all naval forces in Europe, was replaced Saturday as chief of naval operations by Adm. Gary Roughead.

On Monday, Mullen released a letter to U.S. troops and their families in which he vowed to be their advocate to the president and other top leaders.

&#8220;I will not forget the impact my decisions have on you,&#8221; Mullen wrote in the letter, which was provided to Stars and Stripes.

Mullen wrote his top priorities include revitalizing all of the services, especially the Army and Marine Corps.

&#8220;I believe our ground forces are the center of gravity for the all-volunteer force and that we need to make sure that force is correctly shaped and sized, trained and equipped to defend the nation,&#8221; he wrote.

Mullen concluded by asking servicemembers for their input when he visits soldiers, sailors, airmen and Marines, promising to listen to them and keep their best interests in mind.

Full text of Mullen&#39;s letter to troops and their families:

To America&#39;s Soldiers, Sailors, Airmen, Marines and your families,

I am honored today to begin my term as Chairman of the Joint Chiefs of Staff. As I do, allow me to thank you for your service at this critical time in our Nation&#39;s history.

Whether you serve in Baghdad or Bagram, Kabul or Kuwait -- whether you find yourself at sea in the Pacific, flying support missions over Europe, on the ground in Africa, or working every day at stateside bases -- you are making a difference and so is every person in your family. Your service matters. And I do not take it for granted.

The world is a dangerous place. The hundreds of thousands of you who have deployed since September 11th -- many of you more than once -- already know that. You&#39;ve stood up to those dangers. You have lost friends to them. You may even have lost some of yourself to them. The dangers of this new and uncertain era have hit you and the people you love squarely in the gut. I will not lose sight of that.

Nor should any of us lose sight of the need to continue serving. The enemies we face, from radical jihadists to regional powers with nuclear ambitions, directly and irrefutably threaten our vital national interests. They threaten our very way of life.

You stand between these dangers and the American people. You are the sentinels of freedom. You signed up, took an oath, made a promise to defend something larger than yourselves. And then you went out and did it. I am grateful and honored, to be able to serve alongside you.

The law says my main job is to advise the President, the Secretary of Defense and the National Security Council on issues of military readiness and capabilities. I will do that. But, I also see myself as your representative to those same leaders, an advocate for what matters to you and your families -- your voice in the policies, programs, and processes that affect our National security. I will not forget the impact my decisions have on you.

I will remember that you, too, comprise a great generation of patriots, and that among you are combat veterans with battlefield experience that many at my level have never and will never endure. I will tap that experience. I want to make sure we learn from it.

I am not interested in planning to fight the last war, but neither am I interested in ignoring the valuable lessons we continue to learn from this one. It would be foolish to dismiss the knowledge you have gained. I will not do that.

To the degree the wars in Iraq and Afghanistan contribute to or detract from a stable, secure Middle East, they bear a direct effect on the security of the United States. That is why my number one priority will be developing a comprehensive strategy to defend our National interests in the region.

Next on my list is resetting, reconstituting, and revitalizing our Armed Forces, especially the Army and Marine Corps. I believe our ground forces are the center of gravity for the all-volunteer force and that we need to make sure that force is correctly shaped and sized, trained, and equipped to defend the Nation.

Finally, I intend to properly balance global strategic risk. We must stay mindful of our many global security commitments and of the core warfighting capabilities, resources, and partnerships required to conduct operations across the full spectrum of peace and conflict. The demands of current operations, however great, should not dominate our training exercises, education curricula, and readiness programs.

The conflicts in Iraq and Afghanistan will one day end. We must be ready for who and what comes after.

There is much to do. The speed of war, the pace of change, is too great for any of us to manage it alone. I need your help, your ideas, and your input. Whenever I travel to the field and to the fleet, I expect you to tell me what&#39;s on your mind. Tell me what you think. I need your constant feedback. I can&#39;t succeed -- we can&#8217;t succeed -- without it.

You made a promise to defend this country. Let me make one to you: I will listen to you. I will learn from you. And I will endeavor to lead always with your best interest at heart.

The way I see it, that is my job now.