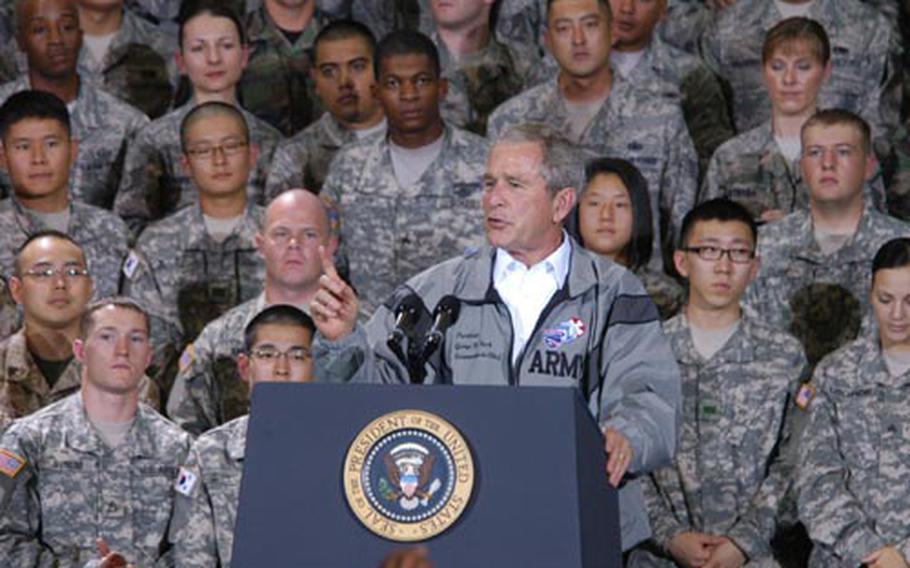 SEOUL, South Korea &#8212; Saying the United States is engaged in an "ideological struggle" to promote freedom, President Bush told troops and their families at U.S. Army Garrison-Yongsan on Wednesday that removing Saddam Hussein from power was the right decision at the time and is still the right decision.

"I know some people in the United States say we&#8217;re not at war, that it&#8217;s a simple law enforcement matter," Bush said during the first speech of his weeklong Asia tour. "Well, in law enforcement you respond after the crime. Hopefully, the Sept. 11, 2001, lesson will teach us all that it&#8217;s important to prevent the crime from happening in the first place, that we have a duty. And that&#8217;s why it&#8217;s important to use all assets of national power to keep the pressure on the enemy."

Bush, who wore an Army physical training jacket, thanked troops for volunteering to be in the military during wartime. Troops clapped and cheered frequently. Bush&#8217;s comments about Iraq and his belief in God and the God-given gift of freedom &#8212; two principles he brought to the White House, he said &#8212; got the loudest responses.

Bush met with South Korean President Lee Myung-bak on Wednesday morning and flew to Thailand after visiting Yongsan. He was scheduled to attend the opening ceremony of the Olympic Games on Friday in Beijing and meet with Chinese leaders.

At Yongsan, Bush said the relationship between the United States and South Korea was "one of the greatest success stories of our time," and said America would keep its military presence here while returning some bases to South Korean control. Troops at Yongsan and other bases in and north of Seoul are scheduled to relocate to Camp Humphreys in 2012.

"That&#8217;ll make this alliance even stronger and more viable in the future," he said.

Bush said the U.S. military&#8217;s presence here is deterring North Korea from using nuclear weapons and that the United States will continue working with South Korea, China, Japan and Russia "until we reach our ultimate goal, and that is a Korea that is free of nuclear weapons."

Pfc. Kiwanis Monroe of 8th Army Special Troops Battalion said she grew distracted after the two-hour wait in the crowded gym and paid little attention to the speech, but she still appreciated the president&#8217;s visit.

"It was nice that he came to show support for what we do over here," she said.

Stars and Stripes reporter Jimmy Norris contributed to this story.