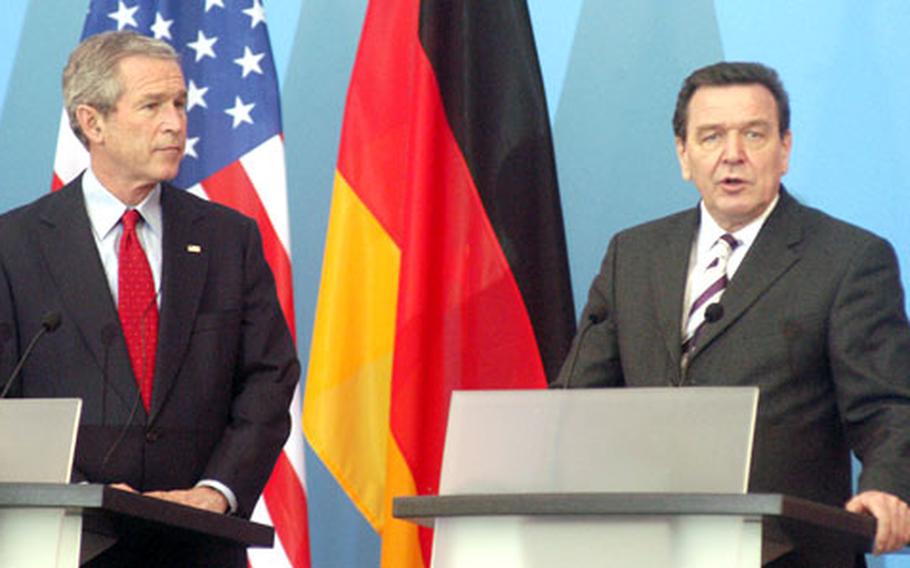 President Bush listens to German Chancellor Gerhard Schroeder during a meeting with the media in Mainz, Germany, following talks between the two leaders. (Michael Abrams / S&S)

President Bush listens to German Chancellor Gerhard Schroeder during a meeting with the media in Mainz, Germany, following talks between the two leaders. (Michael Abrams / S&S) 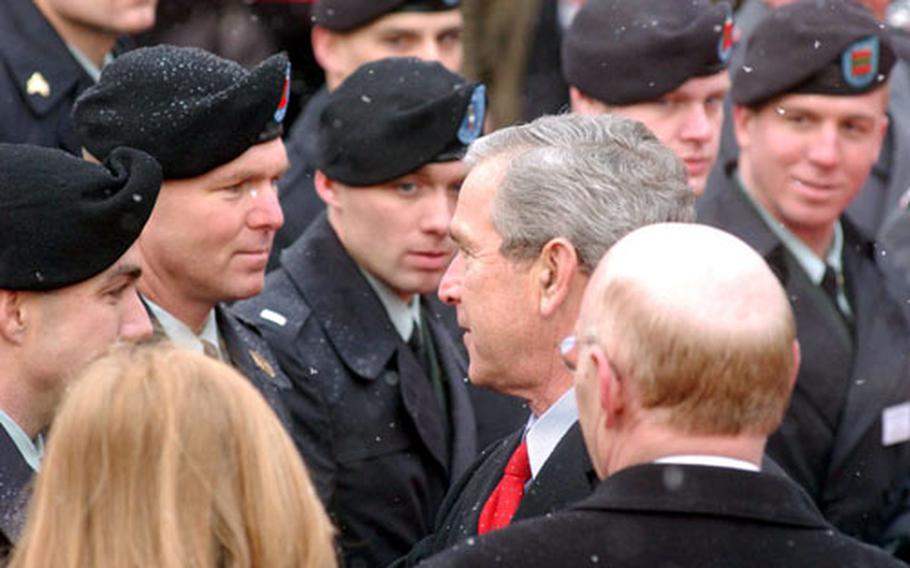 President Bush talks to American soldiers who served in Afghanistan during a military review upon his arrival in Mainz, Germany, on Wednesday. (Michael Abrams / S&S) 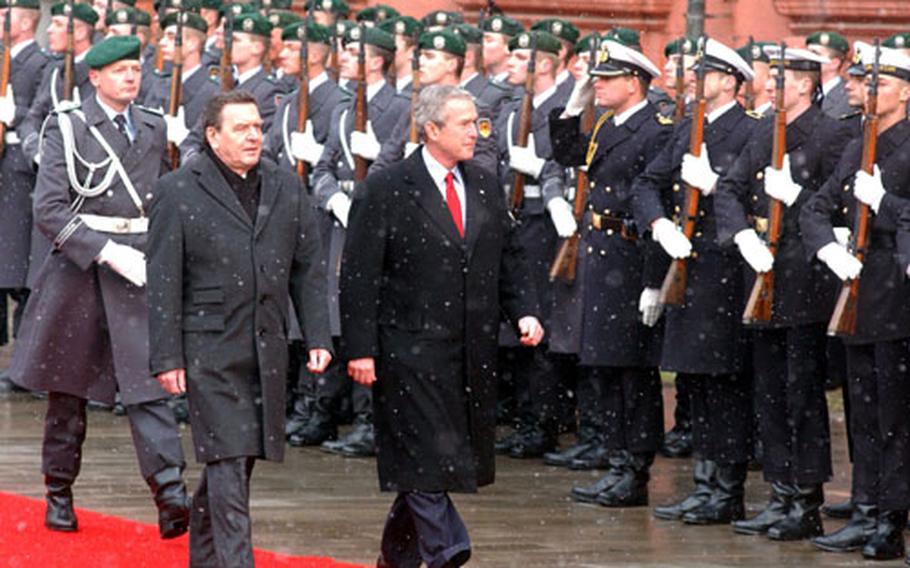 President Bush and German Chancellor Gerhard Schroeöder pass a military review in the courtyard of the Mainz Schloss at the beginning of the president&#39;s visit to Germany on Wednesday. (Michael Abrams / S&S) 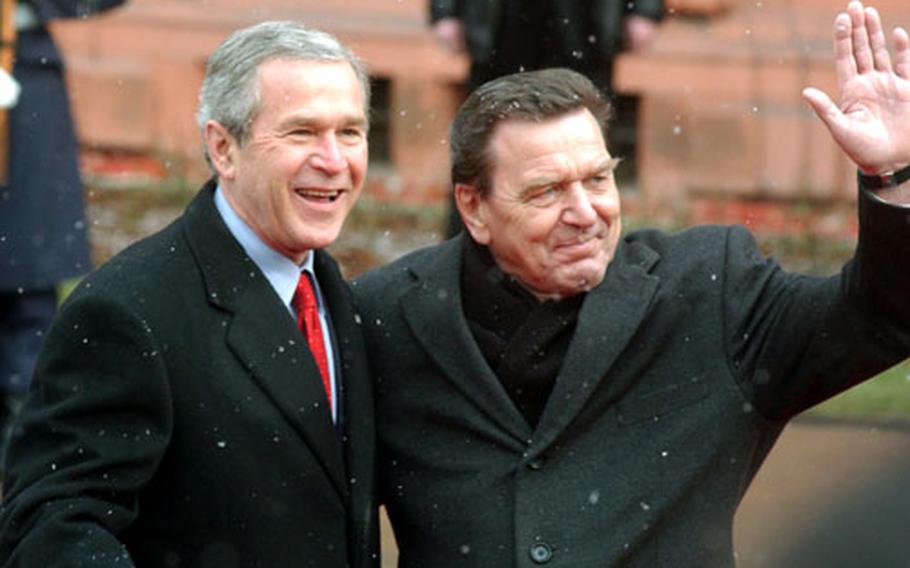 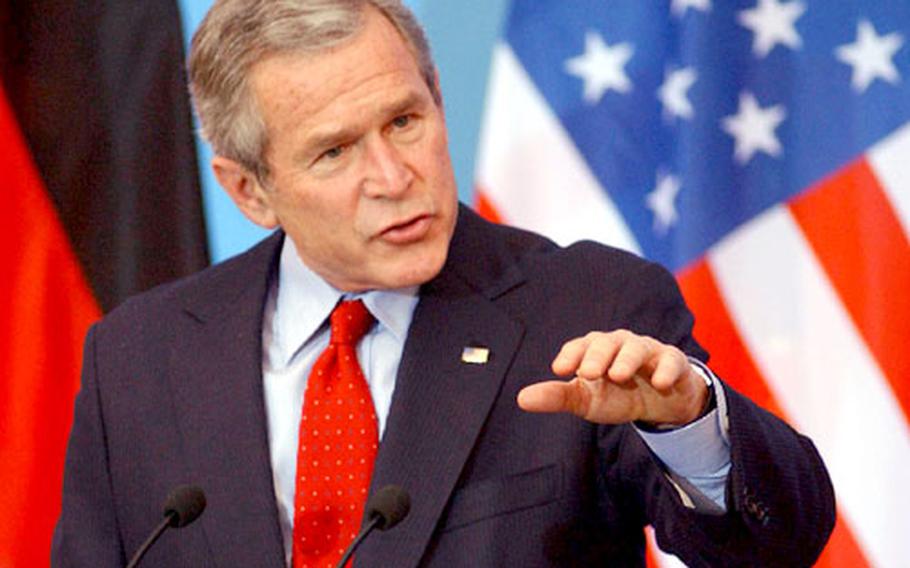 President Bush makes a point as he and and German Chancellor Gerhard Schroeder&#39;s meet with the media in Mainz, Germany. (Michael Abrams / S&S)

MAINZ, Germany &#8212; He called Germany &#8220;a great nation,&#8221; characterized the country as beautiful, and said it was the key to maintaining good relations with the rest of Europe.

Sixteen years after his father paid Mainz a visit, President Bush came to town Wednesday to meet with German leaders to discuss issues and massage egos strained by the war in Iraq. The trip to Germany, which included a stop in nearby Wiesbaden to meet with 1st Armored Division troops, is part of a five-day swing through Europe.

Bush arrived in Germany on Wednesday morning after spending the night in Brussels, Belgium, where he met Tuesday with NATO and European Union leaders. On Thursday, Bush meets with Russian President Vladimir Putin in the Slovak Republic.

German authorities, in consultation with U.S. officials, closed many roads to allow the president&#8217;s motorcade to breeze into this city on the Rhine River.

A recent AP-Ipsos poll showed overwhelming Germany skepticism of Bush &#8212; about four in five Germans say they don&#8217;t agree with the president&#8217;s determination to promote democracy around the world.

While thousands of protesters came to Mainz to demonstrate against Bush, the president and his entourage steered clear of the rallies. One White House journalist traveling with the president was surprised by the absence of locals in the immediate vicinity.

In the days leading up to Bush&#8217;s visit, German citizens living in the region were told to avoid Mainz and Wiesbaden, if possible. Many area residents skipped work Wednesday and some schools closed. Three hours before Air Force One landed at Rhein-Main Air Base, several teenage students called into a German radio station to thank the president for the day off.

At the news conference, Bush and Schroeder insisted that Iran not develop nuclear weapons, and they discussed tactics on how to coax Tehran into compliance.

The two leaders remain far apart on how to make Iran give up any plans to build such an arsenal, although both said they agreed the end result must be a nuclear arms-free Iran. Schroeder played down the differences between the United States and Europe.

&#8220;We absolutely agree that Iran must say no to any kind of nuclear weapons,&#8221; Schroeder said. &#8220;Iran must not have any nuclear weapons. They must waive any right to the production thereof.&#8221;

Schroeder wants Bush to more actively engage in talks led by Germany, France and Britain that offer incentives to Tehran, such as membership in the World Trade Organization, in return for dropping its uranium enrichment program.

Bush, in contrast, backs the European diplomacy but frowns on the idea of rewarding Iran for breaking the nonproliferation treaty that prohibits it from making nuclear fuel or for sponsoring terrorist groups in Israel such as Hezbollah.

&#8220;We will work with them to convince the mullahs that they need to give up their nuclear ambitions,&#8221; Bush said of the Europeans.

Other issues raised during the news conference ranged from Iraq and the Israeli-Palestinian conflict to NATO reform and the Kyoto Protocol on climate change, which the administration rejected during the president&#8217;s first term. The two countries later released a joint statement on the environment in which they pledged greater cooperation in the area of energy efficiency and new technologies.

As he has at other stops on his European tour, the president spoke of the need to put past differences over Iraq behind them and focus on the future. Bush thanked Germany for its &#8220;vital&#8221; contributions in Iraq. Germany and NATO allies agreed earlier this week to help train security forces in Iraq.

The president seemed especially buoyant when he left a 17th-century castle with Schroeder earlier in the day for a review of German armed forces. Heavy snowflakes were falling and various German dignitaries were lined up to greet the U.S. president.

&#8220;Your name please?&#8221; Bush said with a smile as he approached Joschka Fischer, the German foreign minister.

Fischer played along, prompting Bush to identify himself, too.