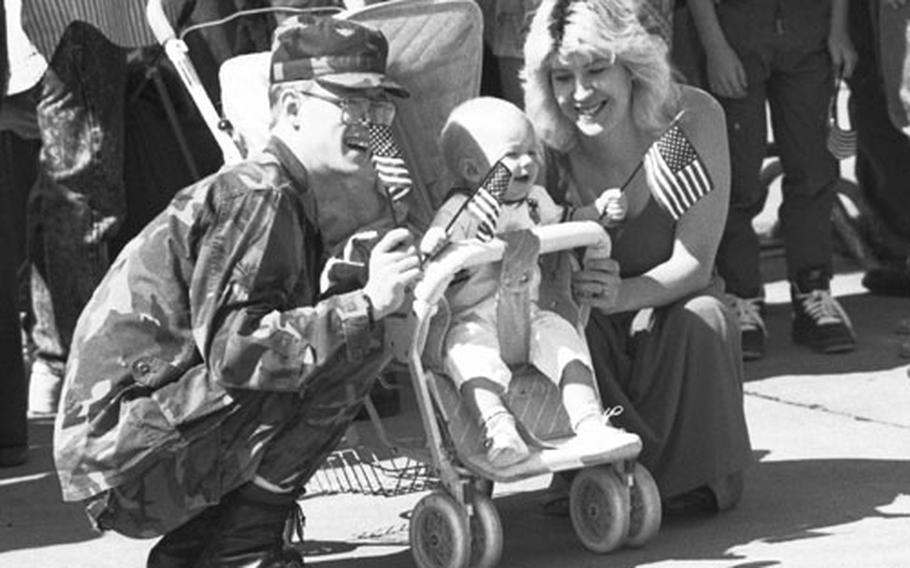 With Air Force One as a backdrop, President Bush speaks at Rhein-Main AB in May, 1989. (L. Emmett Lewis Jr./Stars and Stripes) Speaking to 2,500 flag-waving servicemembers and their families before departing for London, the president said, "You here have been directly responsible, each in his own way, for the longest peace Europe as own or centuries. Your presence here inspires a deep admiration and gratitude within me personally and within people around the world. Thank you for all you've been doing to keep freedom secure."

Bush spoke for about five minutes after arriving on a Marine helicopter from Koblenz, where he ended a Rhine River cruise. With Air Force One as a backdrop, he praised servicemembers for "those everyday acts of vigilance that make preparedness possible."

"It's an honor to stand before an audience of men and women who serve in the armed forces of the greatest country on the face of the earth," Bush said.

"For you, heroism with a human touch is really the meaning of your mission," he said. "It is one of lifesaving medical evacuation missions, triumphant hostage returns and normal day-to-day flying in the crowded skies of Europe.

"You know people talk often about the right stuff, but the heroism and humanity of American soldiers at Rhein-Main and other bases are the stuff of legend. Your dedication, I believe, is constant and enduring day after day."

The crowd responded with laughter and applause when Bush said he had had a successful European trip and then added, "Eat your hearts out: On Friday I'll be returning to the good ole U.S.A."

(The presidential plane touched down at London's Heathrow Airport at 6:30 p.m. Wednesday after a short flight from West Germany, AP reported.)

Bush is to meet with British Prime Minister Margaret Thatcher Thursday morning at No. 10 Downing Street and have lunch with the royal family at Buckingham Palace later in the day.

The Frankfurt High School Band and the Ambassadors, a part of the USAFE Band, entertained the crowd while they waited more than two hours for the president's arrival. Young spectators munched on popcorn and other treats while waiting.

Older members of the crowd knew exactly whom they had come to see.

"I don't think the Russians will come over and attack us," Fetzer said. "As long as there is balance, I'm all for it."

Staff Sgt. Robert Bandstra of the 608th Consolidated Maint Sq at Ramstein AB said, "It may be time for some small cuts; however, the other side should cut more. It is important that Americans stay, regardless of what younger Germans want. We should stay to provide deterrent force. It is a good idea to follow up (Mikhail) Gorbachev's cutbacks, but cautiously."

Earlier Wednesday afternoon, the president and first lady were guests on a Rhine River cruise. The two-hour trip began in Oberwesel, where Ute Port, the 24-year-old local wine festival queen, presented Bush with a huge goblet of local Riesling wine. The president took a drink, then handed the goblet to Chancellor Helmut Kohl.

A few miles north of Oberwesel in St. Goarshausen, several hundred people lined the banks of the river, hoping to catch a glimpse of the president as he cruised by on the party ship.

A few West Germans had come just to see the boatload of dignitaries, while others vacationing in the wine village came over to find out what had drawn so many West German border police and dozens of helicopters.

Günther Lütjeharms of Bremen, West Germany, waited more than an hour to see the president he said he expects to be the best ever.

The retired businessman, who wore a brown baseball cap with Wyoming printed across the front, praised Bush for his proposals to cut U.S. combat troops and weapons.

"It was very good for him to do it like that. Now Mr. Gorbachev must do something. He (the Soviet president) always talked and the West always stared like a hypnotized chicken stares at a snake. It became time for the West to take initiative and do something, too."

On Wednesday morning in Bonn, first lady Barbara Bush and Hannelore Kohl, wife of the West German chancellor, practiced a bit of diplomacy themselves.

The first lady presented the German people with an 8-foot-wide slab of a giant redwood tree cut from the Six Rivers National Forest in northern California.

In a brief ceremony at Rheinaue Park, overlooking the Rhine River, Bush said she hoped the gift would be seen for years to come as a symbol of German-American friendship.

The redwood is intended to mark Bonn's 2,000th anniversary, which is being celebrated this year with the 40th anniversary of the founding of West Germany. The slab was mounted on its side atop an oak platform to display its rings, with small brass plaques embedded in the wood to note important dates in Bonn's history.