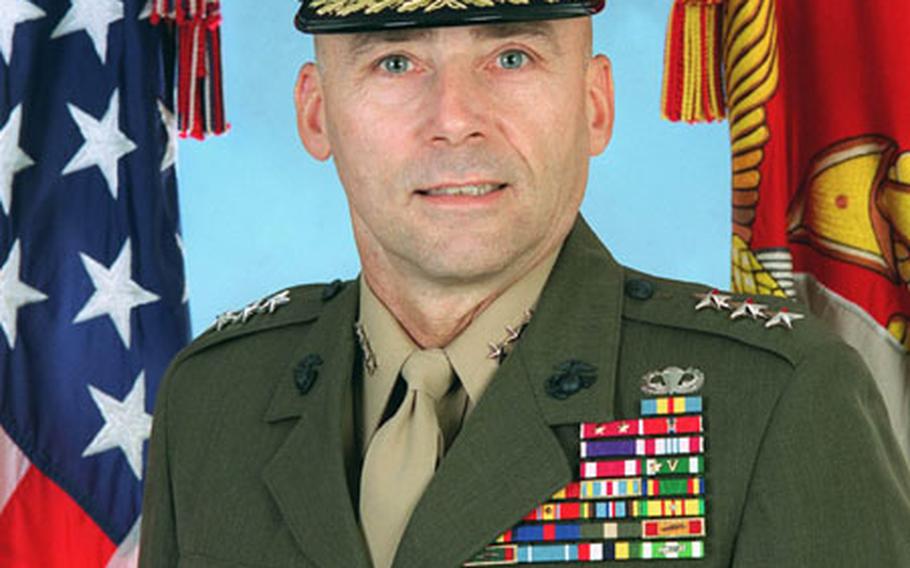 CAMP FOSTER, Okinawa &#8212; Japan&#8217;s top Marine soon may become commander of all Marines in the Pacific.

It is the largest field command in the Marine Corps, covering an area of 105 million square miles, from pole to pole and from the U.S. West Coast to the Arabian Sea. The peacetime combat forces and supporting installations include more than 80,000 Marines and sailors.

The nomination was announced Tuesday in Washington by Secretary of Defense Donald Rumsfeld. Gregson&#8217;s nomination will have to be confirmed by the U.S. Senate, and his departure from Okinawa cannot be determined until the confirmation process is over, said Capt. Chris Perrine, media officer for Marine consolidated public affairs on Okinawa.

If selected, Gregson will relieve Lt. Gen. Earl B. Hailston, who slid into the position in August 2001 after a two-year stint in the job Gregson now holds. Hailston is scheduled to retire in August.

Gregson, a 1968 graduate of the U.S. Naval Academy, currently is serving as commander of the 3rd Marine Expeditionary Force, Okinawa, Japan. He also wears the hats of commander, Marine Forces Japan and commander, Marine Corps Bases Japan, and is the Okinawa area coordinator, the top-ranked U.S. general on the island.

He began his present assignment in July 2001. Prior to that, he was commanding general of the 3rd Marine Division on Okinawa.

No replacement for Gregson has been named.

Gregson&#8217;s first assignment in the field was with the 1st Reconnaissance Battalion, 1st Marine Division in the Republic of Vietnam from February 1969 to August 1970 as an infantry battalion executive officer.

His duties outside the Marine Corps include being a military observer with the U.N. Truce Supervision Organization in Egypt, deputy for Marine Corps matters in the secretary of the Navy&#8217;s Office of Program Appraisal, and executive/military assistant to the director of central intelligence.

In his last Washington assignment, he served as director, Asia and Pacific affairs, in the Office of the Undersecretary of Defense for Policy.

Besides a bachelor&#8217;s degree from the U.S. Naval Academy, Gregson holds master&#8217;s degrees in strategic planning from the Naval War College and international relations from Salve Regina University in Rhode Island.

He is a member of the Marine Corps Association, the U.S. Naval Institute and the Council on Foreign Relations.