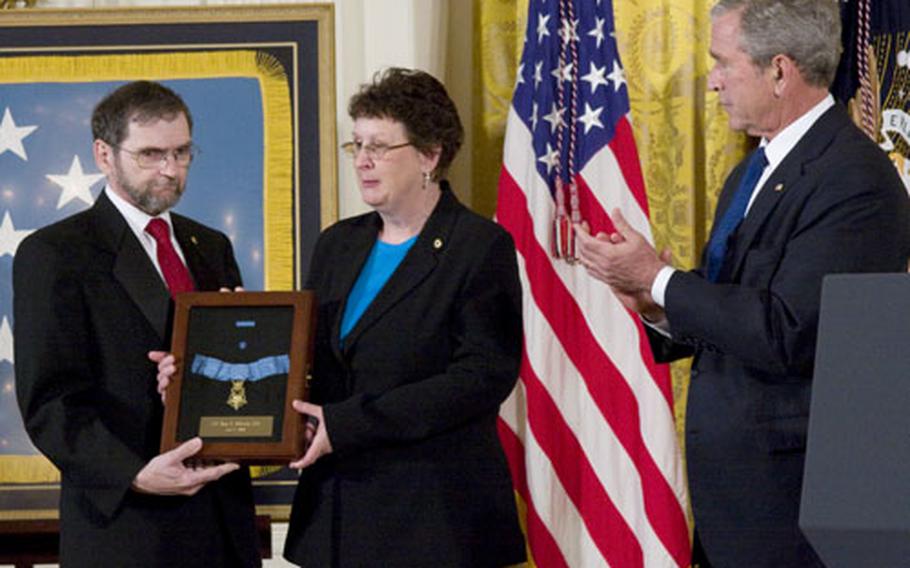 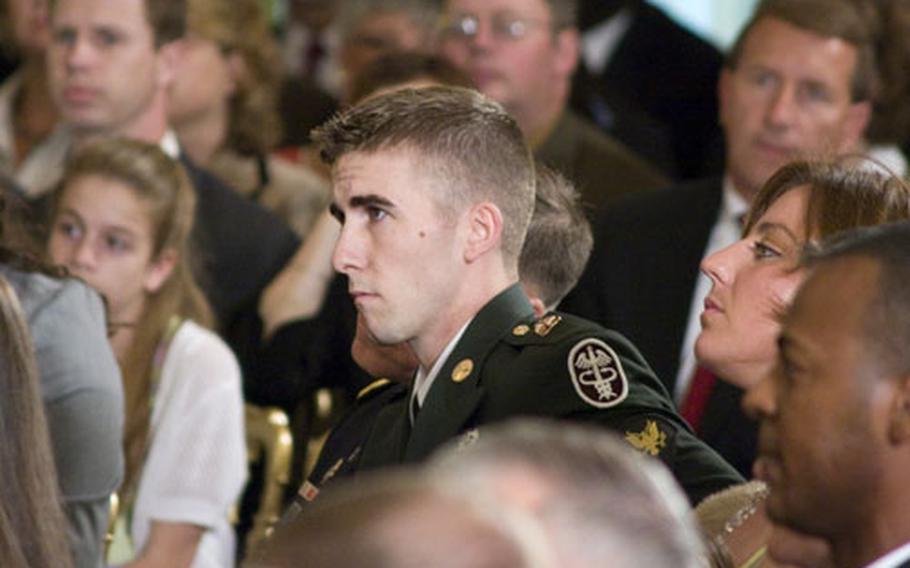 Among those on hand to witness Monday&#39;s ceremony was Spc. Sean Lawson, one of the soldiers Pfc. Ross McGinnis protected by falling on the grenade. (Leo Shane III / S&S) 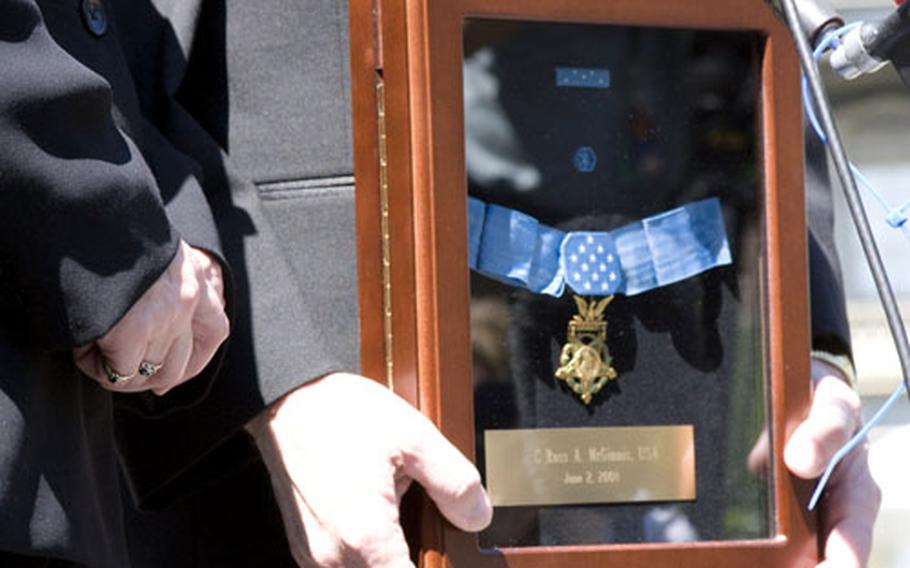 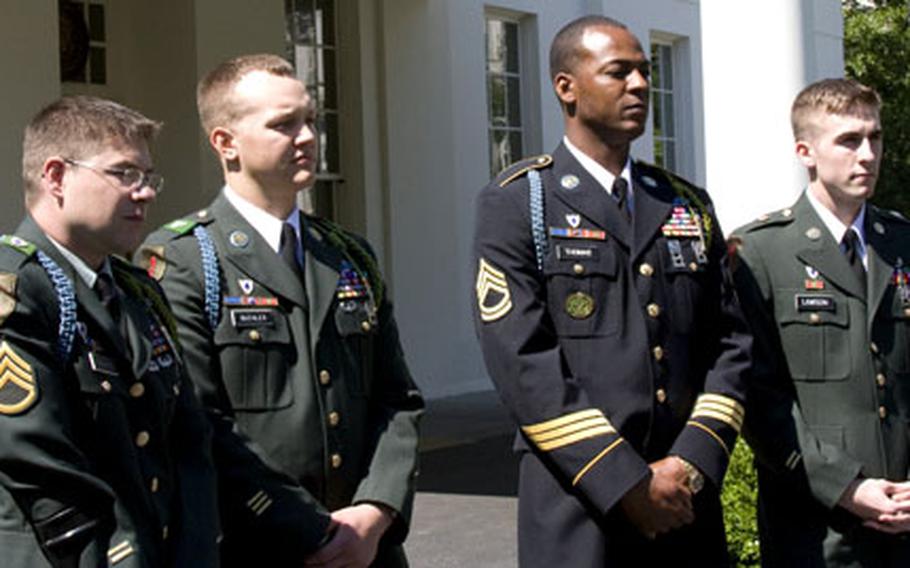 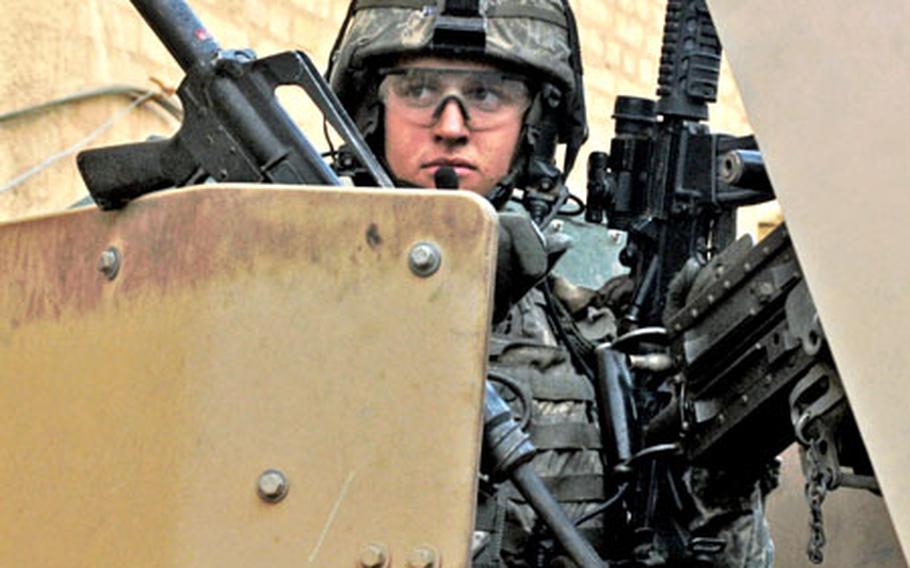 Pfc. Ross McGinnis mans his weapons in the turret of a Humvee in the Adhamiyah neighborhood of Baghdad just days before his death in 2006. (Ben Murray / S&S file photo)

WASHINGTON &#8212; Tom McGinnis said his son would have loved all the fuss of a presidential ceremony in his honor.

"He enjoyed the spotlight," he told reporters. "He didn&#8217;t mind having people look at him, and in fact he did that on purpose a lot of times. So I think he really would have enjoyed having a big ceremony and lots of attention."

Instead, Pfc. Ross McGinnis&#8217; family was on hand at the White House on Monday to accept the Medal of Honor in his memory, almost 18 months since his death in Iraq.

Ross McGinnis, who would have turned 21 this week, is the fourth man awarded the nation&#8217;s highest military honor for actions in Iraq, all of them posthumously.

On Dec. 4, 2006, McGinnis was serving as a Humvee gunner in Adhamiyah when his unit was ambushed. Army reports said an enemy fighter tossed a grenade into the vehicle, but that McGinnis was the only soldier to see where it landed.

Realizing his four fellow soldiers would not have time to escape before it detonated, the 19-year-old leapt down into the cab and smothered the grenade with his body.

The blast killed him instantly. The four other soldiers survived, with three of them suffering only superficial injuries.

All four traveled to Monday&#8217;s ceremony: Retired Sgt. Ian Newland, whose injuries from the event forced him out of the service, said no amount of lingering pain and discomfort would keep him from the event.

At the event Bush described McGinnis as "a slender boy with a big heart and tender spirit" from western Pennsylvania, known for his jokester personality and frequent impersonations of commanding officers.

"A buddy from boot camp said that Ross was the only man there who could make the drill sergeant laugh," Bush said.

Family members also acknowledged that he was often in trouble as a teen &#8212; he was expelled in eighth grade in part because he was caught with marijuana in school &#8212; but that the attack outside Baghdad showed his true character.

"Ross did what he did for his buddies," his mother, Romayne, said. "He did that all his life. He takes his friendships very seriously, and it didn&#8217;t surprise us when we found out the details."

Before handing the medal to McGinnis&#8217; parents, Bush noted that the honor commemorates the young soldier&#8217;s heroism for history, but does not replace the loss felt by his family.

His parents said the event was full of pain and pride for them.

"We can go day to day now without constant memories," his father said. "Time does help. But it&#8217;ll never go away."

Audio from the President:President Bush&#39;s remarks about Pfc. Ross A. McGinnes at the ceremony.

Audio from Tom and Romayne McGinnisDid the President say anything to you before you went out there?

What would your son have thought of this ceremony if he were alive to attend it?

What will people remember about your son?