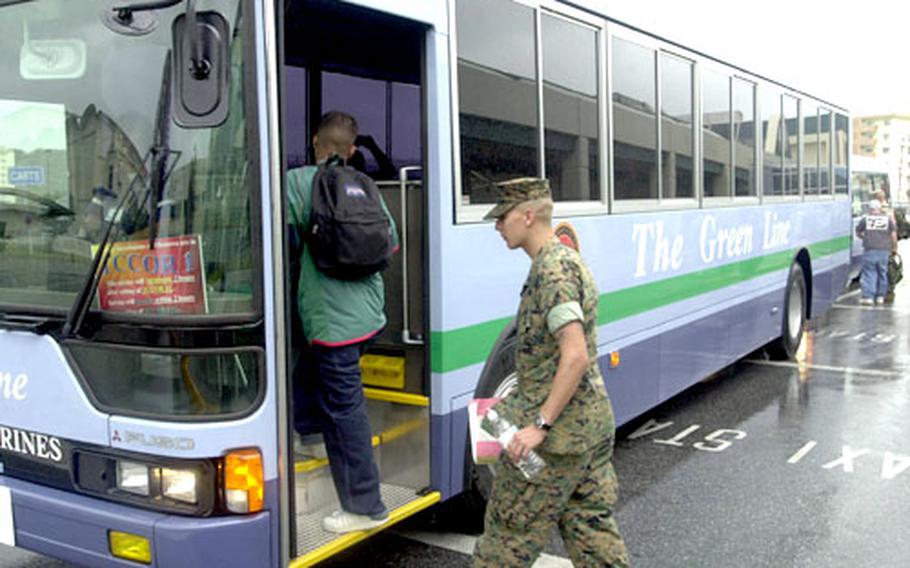 Lance Cpl. Miguel Perez, from 3rd Marines Headquarters Group, boards one of The Green Line’s 46 buses. Perez took the bus from Camp Hansen to Camp Foster for a medical appointment. He said the bus system saves him money as he’s spent $45 for a cab ride from base to base before. (Fred Zimmerman / S&S)

Those are the kind of statistics The Green Line, a free mass transit system run and funded by the Marine Corps, has racked up in less than three years of operation, according to Thomas L. Ramer.

Ramer, operations officer for Garrison Mobile Equipment, which supplies the buses, said that more than 22,000 passengers are carried more than 26,000 miles each week in the area, where most Marines of rank E-4 or below are prohibited from having private vehicles.

And those buses never have had a major accident and never have broken down along the road, he said.

Besides supplying a service to Marines, Ramer said, The Green Line saves the government money. He cited a 2002 survey that determined the bus line saved Marine Corps Air Station Futenma $11 million that year in enhanced proficiency and productivity.

And, Ramer said, the buses &#8220;reduce the footprint&#8221; by reducing the number of privately-owned and government vehicles on the highway.

A reliable bus line with plenty of seats is a big benefit to those on Okinawa, according to Maj. Maria McMillen, base Motor Transport officer, who remembers the pre-Green Line days &#8212; but not fondly.

Cpl. Christopher Green said the buses have been a great way to get around. He&#8217;s been on the island since July with the 1st Battalion, 3rd Marines, on the Unit Deployment Program from Hawaii. He said he uses The Green Line about once a week.

Green said he could understand why a lot of junior Marines would use the bus system on Okinawa: Taking a cab from the uniform shop to the exchange on Camp Foster, about one mile, cost him $5.

Ramer said the bus line has generated considerable interest. He said the Office of the Secretary of Defense has recognized the system for its quality-of-life and safety improvements and as a better business idea. He said other bases often ask how the system works and try to replicate it.