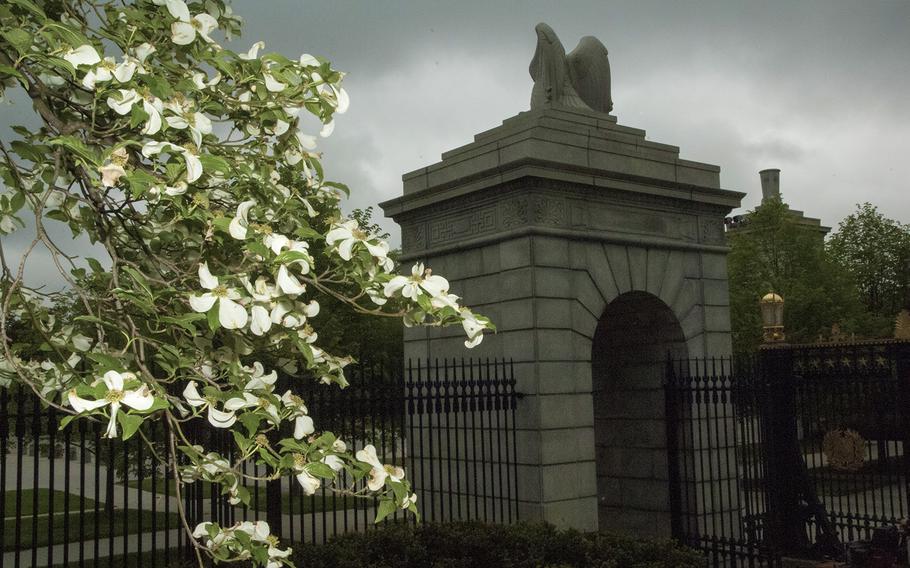 Buy Photo
The blossoms of a dogwood tree frame an entrance to Arlington National Cemetery. A bill aimed at decreasing recent delays in veteran burials by giving Congress new VA oversight got a push forward from lawmakers Thursday, Nov. 20, 2014. (Carlos Bongioanni/Stars and Stripes)

A Senate version of the bill requiring the VA to report any burial delays longer than 30 days was introduced by Sen. Dean Heller, R-Nev., following a filing earlier this year in the House, which boosted the odds Congress may act to pass the new reporting rules before the end of the year.

Reports have sprung up around the country that deceased vets are waiting months to be interred in the Department of Veterans Affairs’ system of national cemeteries.

“This legislation will keep the VA accountable for ensuring every veteran receives a proper burial in a timely manner,” Heller said in a joint released statement with Rep. Ed Royce, R-Calif., the House sponsor.

Under the bill, the VA would be required to track and record any burials not completed within a month as well as the names of the entities that are responsible for the bodies, including local medical examiners, funeral directors, and county service groups.

Data on the burial delays would be collected in an annual report and given to the House and Senate veterans’ affairs committees, according to the bill language.

Reports of delays are only one of the recent headaches for the VA, which is working on a massive overhaul following a scandal over patient wait times in his nationwide veteran health care system.

The agency oversees a system of 131 cemeteries and burial rights for veterans. Over the past year, there have been media reports of long delays for deceased veterans at facilities in California and elsewhere.

“While the quality of the healthcare that veterans receive has been in the news lately, our veterans deserve the same attention when it comes to their burials,” Royce said in the statement.

Still, the legislation is likely to face steep odds.

Both chambers of Congress left Washington on Thursday and are not scheduled to return until after Thanksgiving. Next month, lawmakers will only have a couple of weeks to pass crucial budget and war bills and other issues may get pushed aside.