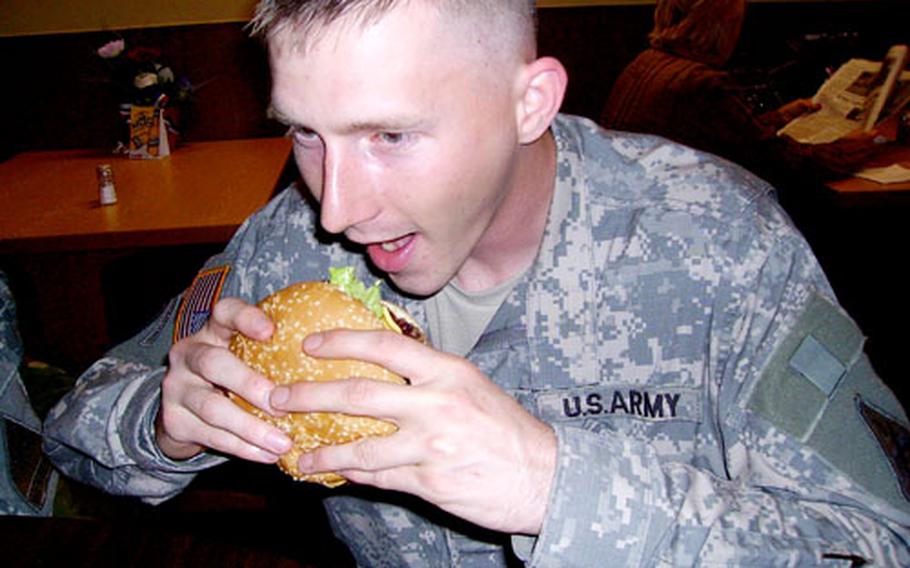 GRAFENW&#214;HR, Germany &#8212; Earlier this year, the staff at the base bowling alley decided to rename their juicy 10-ounce hamburger as a way to welcome the newly arrived soldiers of the 2nd Cavalry (Stryker) Regiment.

Trouble is, some Army officials, as well as soldiers from other units, found the &#8220;Stryker Burger&#8221; a little hard to swallow.

Range control worker Sgt. John Lenz, 33, of Omaha, Neb., said the burger is his favorite item on the Lane 25 menu, but naming it after the Stryker Brigade was too much.

But soldiers weren&#8217;t the only ones grilling the Grafenw&#246;hr Bowling Center staff on the name change.

&#8220;Sometimes I feel like I&#8217;m second class compared to them,&#8221; he said adding that he hopes things return to normal once the Strykers settle in.

&#8220;It (the Stryker Burger) was never meant to slight any unit in our &#8216;Army of One,&#8217; only to recognize a very fine organization that we knew once before and looked forward to their return,&#8221; assistant manager Bob Adams said in an e-mail.

The 2nd Cavalry Regiment has a storied past in Bavaria, playing an integral role in U.S. victory during the Cold War and providing much of the punch during Desert Storm, he stated in the e-mail. Renaming the burger in the unit&#8217;s honor was one way of recognizing its past accomplishments and looking forward to future ones.

But &#8220;obviously, some were not pleased and felt left out as we were informed by IMA-E that the Stryker Burger was causing problems with morale throughout the (U.S. Army Europe) community,&#8221; he stated.

D&#8217;Amario said 2nd Cav has received a lot of attention in the past few months.

&#8220;They are the new kid on the block and they are a big kid &#8211; a regiment,&#8221; he said. &#8220;It would be understandable that some units may feel secondary to that kind of attention through they should not because everybody is equally important in the military,&#8221; he said.

But Lenz, the range control worker, came up with another possible solution: The bowling center should consider naming a beer in his unit&#8217;s honor in an effort to provide &#8220;more unit equality in menu items.&#8221;