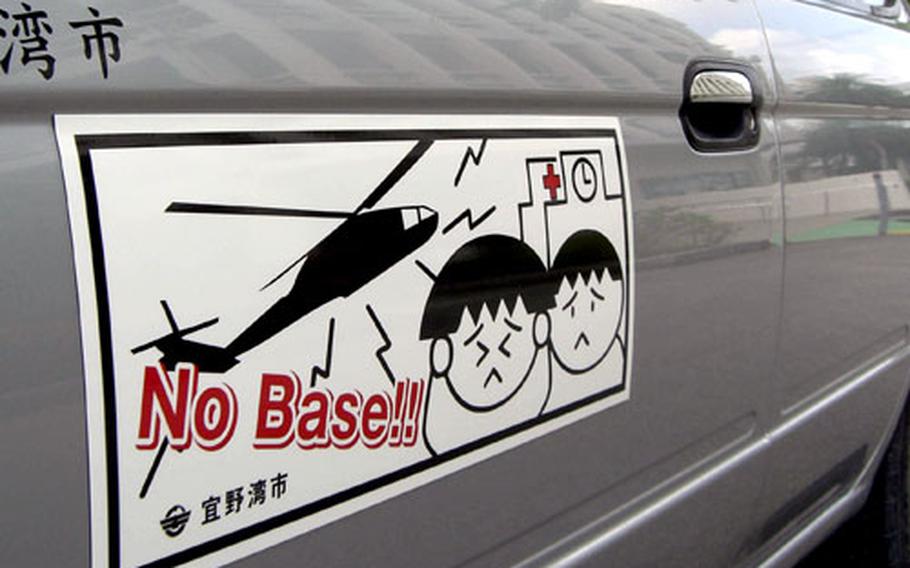 One reading &#8220;No More Base!!&#8221; shows two children holding their ears against helicopter noise.

The city has printed 800 bumper stickers to be given free to the public starting Friday.

More than 100 were distributed the first hour they were available.

Marine officials had no comment Friday on the campaign. Previously, they&#8217;ve supported closing MCAS Futenma if a similar facility could be built elsewhere on the island.

The stickers are part of a campaign to close MCAS Futenma, in a heavily urban area, even before a planned new air station in rural northeastern Okinawa is finished.

&#8220;Having the sticker on the vehicles will help to raise people&#8217;s awareness of the dangerous situation,&#8221; Iha said Friday, adding that he hopes the campaign will convey Ginowan residents&#8217; wishes to U.S. and Japanese governments.

MCAS Futenma has been earmarked to close since 1996 when the United States and Japan agreed to move Marine air operations to a more rural area.

But disputes over the base&#8217;s future location and protestors&#8217; effective efforts scuttled the project.

An August 2004 helicopter crash on the Okinawa International University campus next to the base intensified efforts to find a safer location.

In May, the United States and Japan agreed to move all Marine air operations on Okinawa to a new airport to be built on the part of Camp Schwab on the Henoko peninsula. The project is to be completed in 2014.