Bullets, ‘ballet’: All in a day for 37th Transportation’s convoys 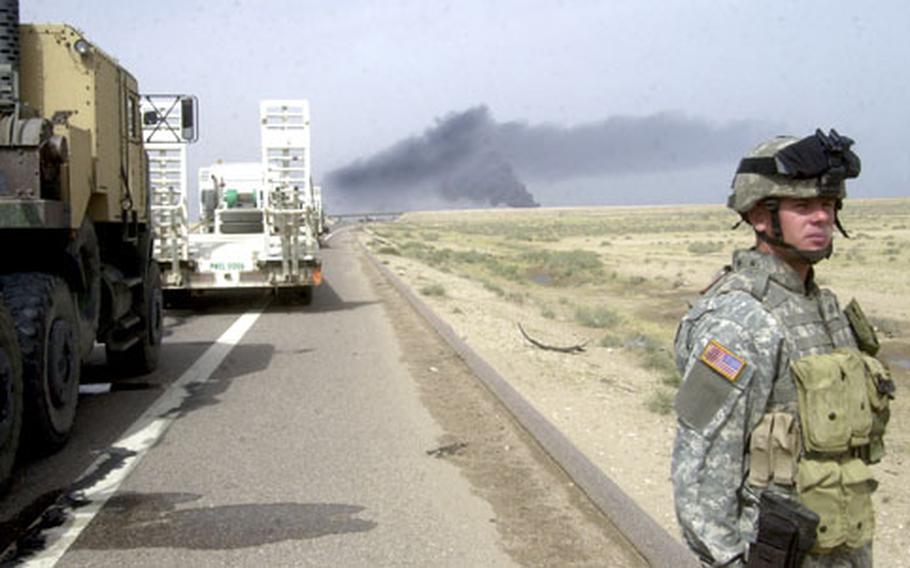 Pfc. Kenneth Pettigrew, of 1st Battalion, 77th Field Artillery Regiment, stands on the Iraqi roadside as his convoy is halted because of an accident ahead. (Steve Mraz / S&S)

Orchestrating, organizing and tracking as many as 3,050 trucks and 80 convoys a day through Kuwait and Iraq is a task that falls on the brigade-level 37th Transportation Group out of Kaiserslautern, Germany.

The task becomes more complicated by the fact that the convoys are traveling roads notorious for improvised bombs and some are covering distances equivalent to the mileage between Washington, D.C., and Dallas.

So what does it take to pull off the mission when 84 convoys are scattered around Iraq and Kuwait on a single day?

From flatbed trucks to the massive Heavy Equipment Transporter, the convoys ferry everything from food and ammunition to tanks into Iraq from Kuwait.

Being on the road that much exposes the convoys to enemy attack. On average, two attacks occur a day against convoys under command and control of the brigade. Twenty-five percent of the soldiers under the 37th Transportation Group &#8212; about 1,400 &#8212; have earned their Combat Action Badge.

On the battalion level, Logistics Task Force 28 out of Mannheim, Germany, currently has two field artillery batteries out of Fort Sill, Okla. &#8212; the 1st Battalion, 77th Field Artillery Regiment and the 5th Battalion, 3rd Field Artillery Regiment &#8212; underneath it that perform HET missions. At one time, the battalion had six units underneath it with nearly 1,700 soldiers. During this deployment, the 28th Transportation Battalion is known as Logistics Task Force 28.

Units underneath the battalion recently transported equipment for 1st Armored Division troops deploying to Iraq from Kuwait. While the transportation units are based in Kuwait, nearly all of their missions are in Iraq, said Lt. Col. Stephen E. Farmen, commander of LTF 28.

Since the battalion arrived in August, it has been responsible for the movement of more than 16,000 pieces of equipment in support of the war in Iraq.

Missions the convoys complete without attack are not mere coincidence, Farmen said.