Bulldog brigade mascot goes under the knife in South Korea 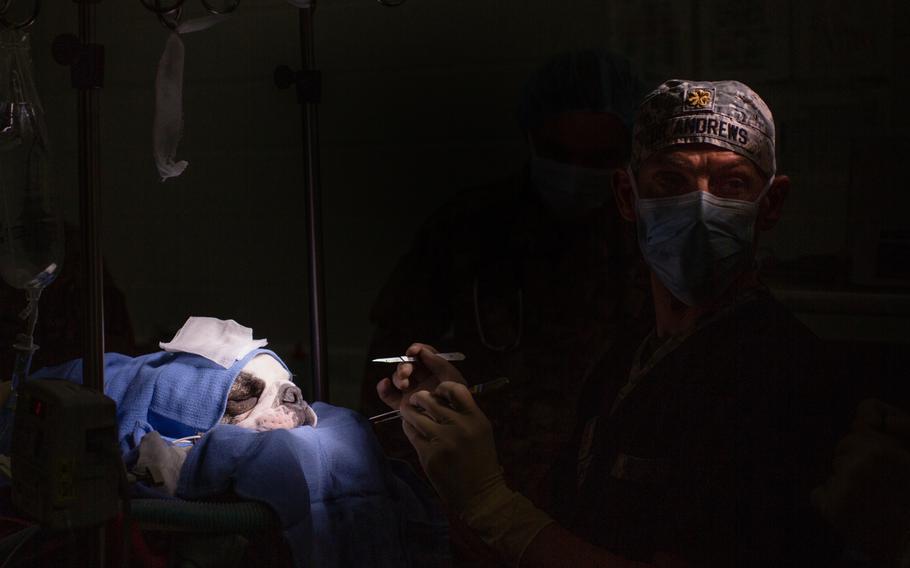 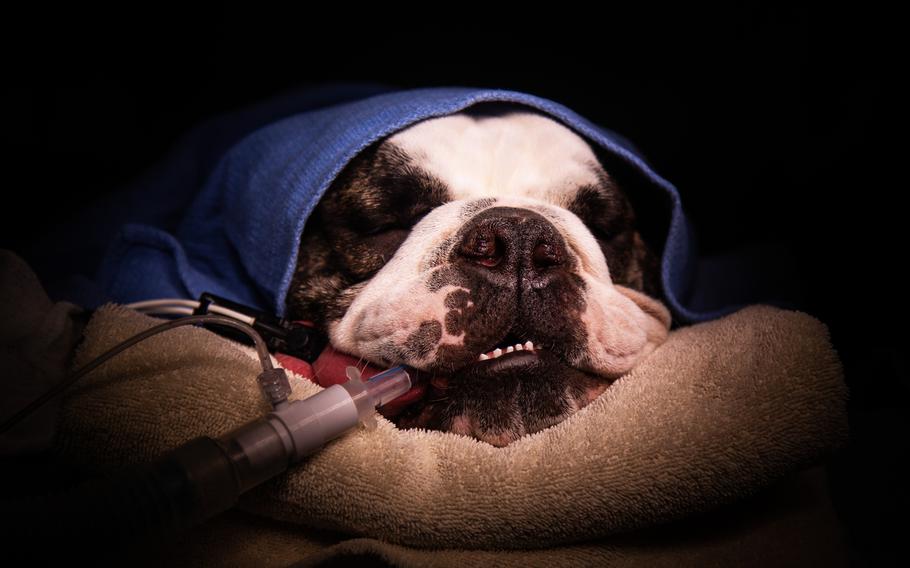 CAMP HUMPHREYS, South Korea — A Texas-based unit’s youngest and furriest soldier is breathing easier, literally, thanks to a Halloween-night surgery in South Korea.

Pfc. Tank Chester, a 7-month-old Victorian bulldog who serves as mascot for the 3rd Armored Brigade Combat Team, 1st Armored Division “Bulldogs,” had his soft palate trimmed and nostrils widened at Camp Humphreys’ veterinary clinic to ease the airways for the member of the notoriously hard-breathing breed.

“He’s the face and symbol of who we are,” Cpl. Mitchell Duncan, Chester’s handler, said at the clinic Wednesday.

Chester, along with the rest of the Bulldog brigade, arrived in South Korea last month taking the reins as the 2nd Infantry Division’s sole brigade combat team on the peninsula.

While technically an elective surgery, it’s a nearly necessary one for the active mascot, who like his predecessors is expected to ride shotgun with the unit’s command team in everything from helicopters to tanks as they inspect and boost morale to the brigade’s troops.

“With these English bulldogs… we’ve bred in the smoosh face, which looks really cool, however it comes with its own complications,” said Camp Humphreys veterinarian surgeon Capt. Sean Curry. “It’s really a struggle for them to breathe.”

Chester is the ninth of his name since the first was donated in 1940 by the British as a “token of appreciation,” Duncan said. He comes with a full complement of soldiering gear, including identification cards, a passport and a rank he’s still living up to.

“He’s a Pfc. for a reason — he’s got an attitude, he’s a little stubborn, and he still does things his way,” the 24-year-old from Redfield N.Y., said jokingly. “He’s your typical bulldog. He loves people; loves attention. His idea of fun is sitting on the couch and watching TV with you.”

The surgery might never have happened if not for a bit of luck. The military surgeon back home at Fort Bliss, Texas, didn’t feel comfortable with the procedure, and no surgeons were trained for it in South Korea. A weeklong medical symposium in Yongsan serendipitously brought in the Army’s main surgeon in the region, Maj. Shane Andrews, whose team routinely does the surgery on Okinawa.

A team of four worked on Chester. Two enlisted veterinary technicians monitored the dog’s anesthesia and vitals, while Curry and Andrews took turns opening up his airways and cutting off a wedge of cartilage in each nostril. The surgery took about 40 minutes.

The number of sugeries, including standard spays and neuters, they could perform has been limited for nearly all of the past year because they’ve been unable to get some necessary medication through customs, Curry said. But three weeks ago, they swung the surgery doors wide-open to the public.

Curry added that Chester’s surgery will help families with bulldogs on the peninsula and “in the process we’re helping out a dog, and that’s always a good day for us.”

Chester was released Thursday morning back to the Bulldog brigade with no issues.

Here's a look at the process: