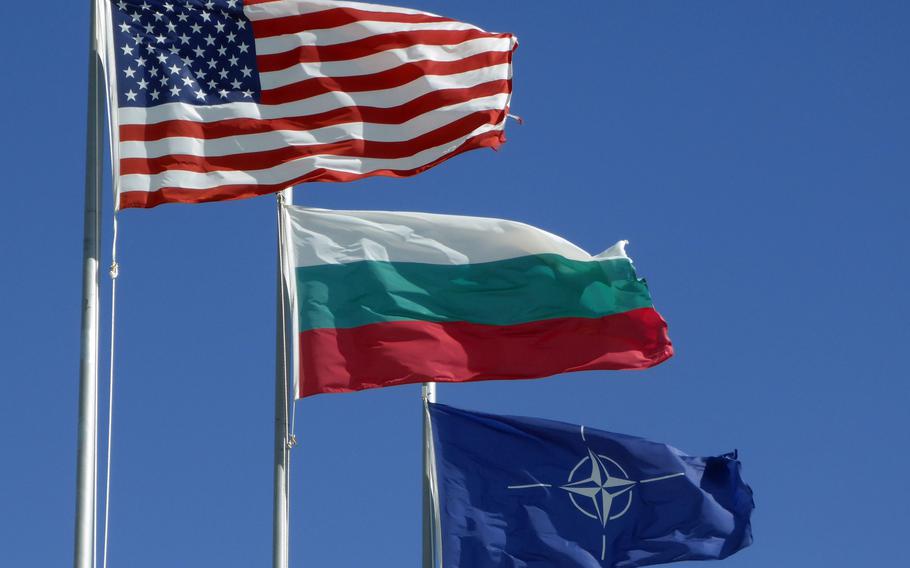 Buy Photo
The American, Bulgarian and NATO flags fly over the American headquarters building at the Novo Selo Training Area, Bulgaria, June 26, 2015. The United States signed a defense cooperation agreement with Bulgaria in 2006 to use its military bases, two years after Bulgaria joined NATO. (Michael Abrams/Stars and Stripes)

Buy Photo
The American, Bulgarian and NATO flags fly over the American headquarters building at the Novo Selo Training Area, Bulgaria, June 26, 2015. The United States signed a defense cooperation agreement with Bulgaria in 2006 to use its military bases, two years after Bulgaria joined NATO. (Michael Abrams/Stars and Stripes) 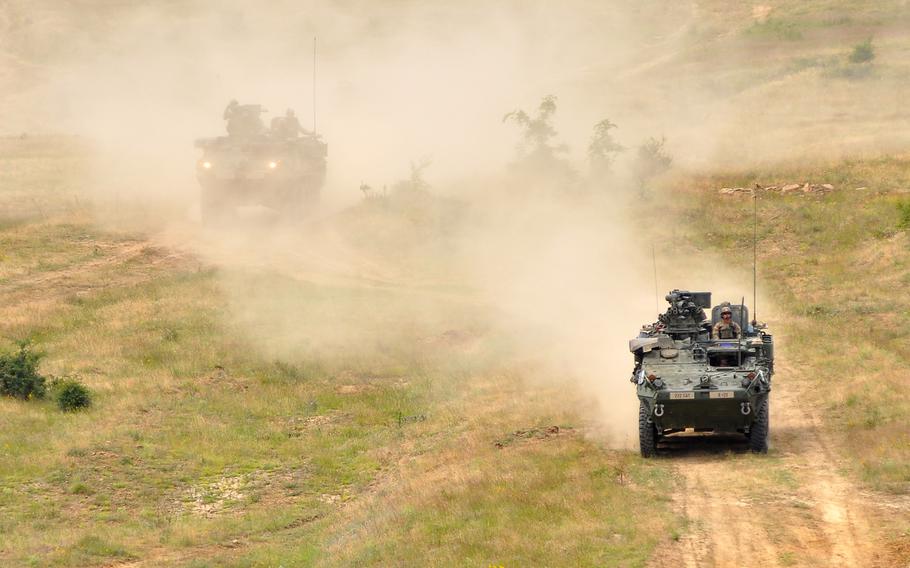 Buy Photo
Strykers of 2nd Squadron, 2nd Cavalry Regiment roll across the Novo Selo Training Area, Bulgaria, Thursday June 25, 2015. Training at the base is set to increase in September, with the first of three planned six-month rotations of about 150 Marines. (Michael Abrams/Stars and Stripes) 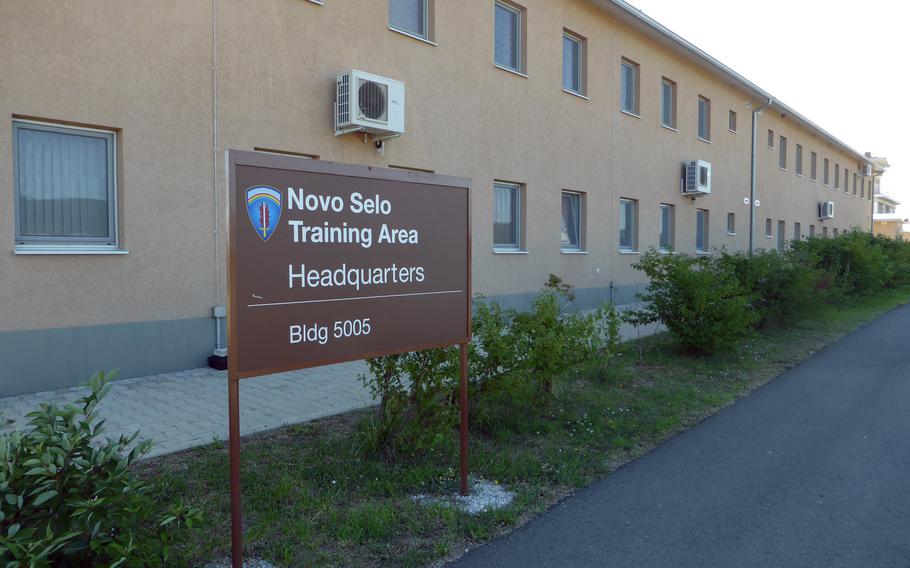 Buy Photo
The American headquarters at the Novo Selo Training Center, Bulgaria, June 26, 2015. The American side of the base opened more than two years ago. (Michael Abrams/Stars and Stripes) 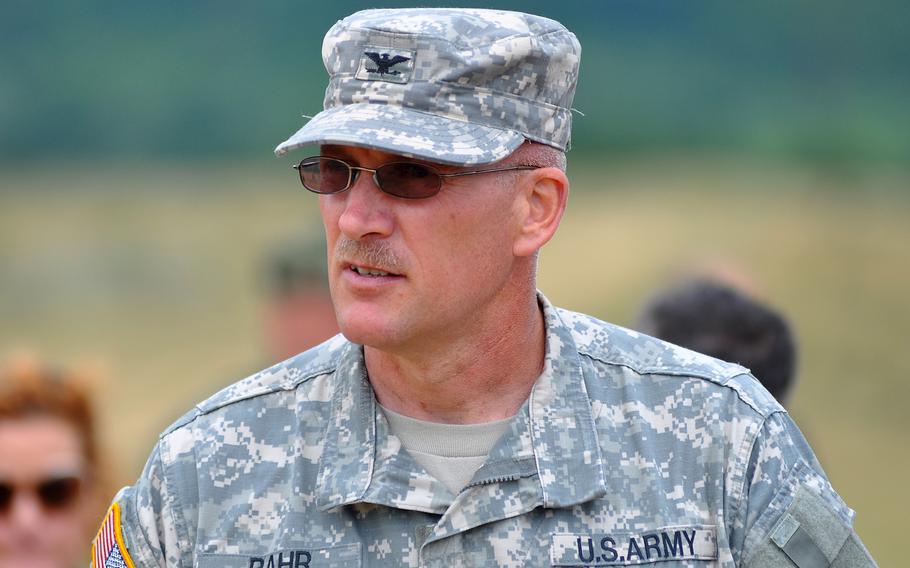 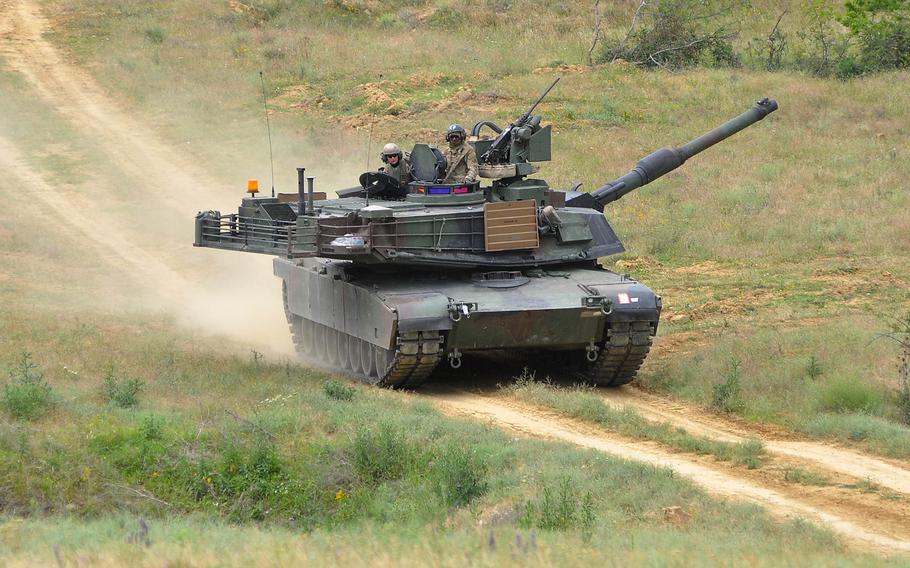 Buy Photo
A U.S. Army M1A2 Abrams tank, manned by soldiers of the 3rd Combined Arms Battalion, 69th Armor Regiment, rumbles across Novo Selo Training Area, Bulgaria, following a live-fire exercise at the training area, Thursday June 25, 2015. Training at the base is set to increase in September, with the first of three planned six-month rotations of about 150 Marines. (Michael Abrams/Stars and Stripes) 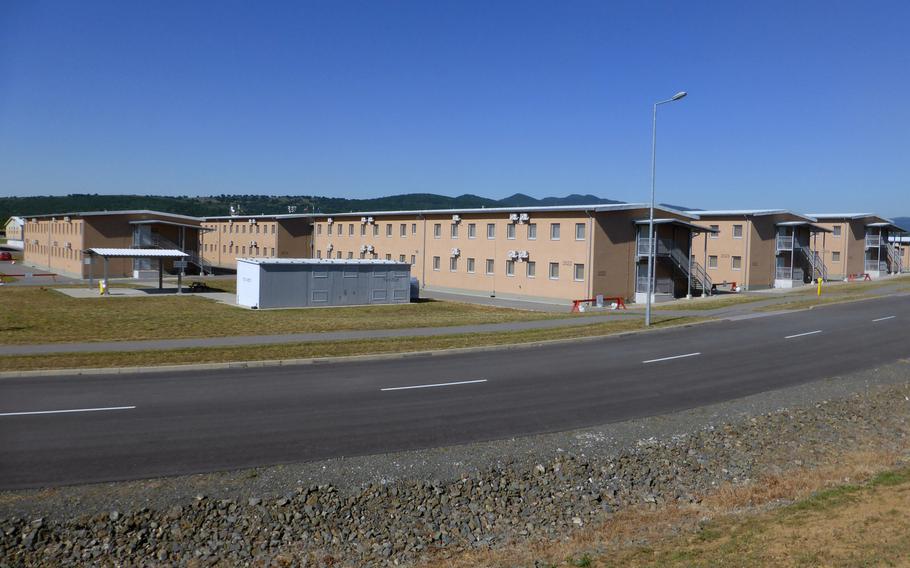 Buy Photo
Rows of barracks sit on the American side of the Novo Selo Training Area in Bulgaria, June 26, 2015. A $50 million construction project at the base includes nearly two dozen barracks, a chapel, post office, gymnasium, small base exchange and new roads, parking areas and sidewalks. (Michael Abrams/Stars and Stripes) 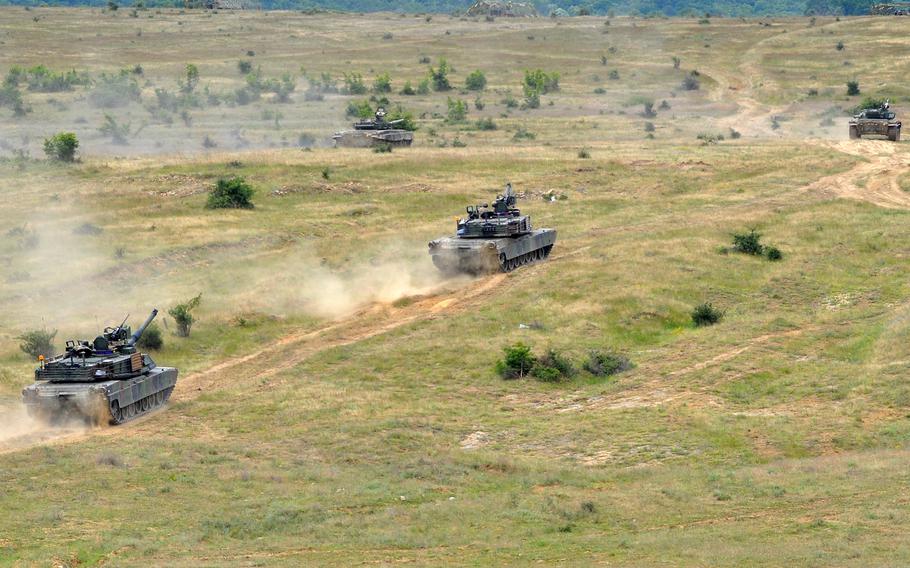 Buy Photo
Two American M1A2 and two Bulgarian T-72 tanks rumble across the Novo Selo Training Area in Bulgaria during a live-fire exercise, June 25, 2015. Soldiers from 3rd Infantry Division are also set to arrive at the base this fall for a 90-day rotation. (Michael Abrams/Stars and Stripes) 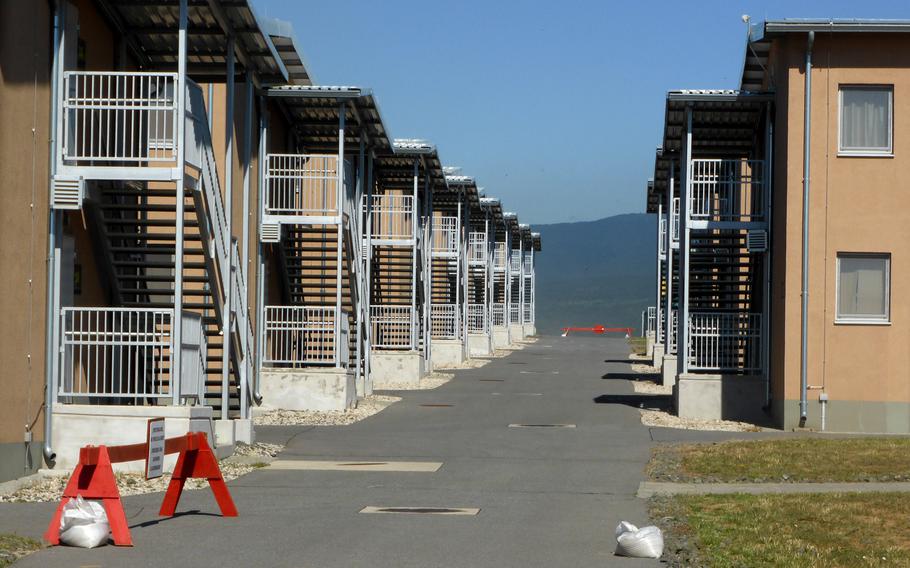 Buy Photo
Rows of barracks sit on the American side of the Novo Selo Training Area in Bulgaria, June 26, 2015. A $50 million construction project will see the addition of nearly two dozen barracks at the base. (Michael Abrams/Stars and Stripes)

After signing a defense agreement with Bulgaria in 2006, the U.S. government began a $60 million construction project at this training base, building nearly two dozen barracks buildings -- along with a chapel, post office, gymnasium and small base exchange -- and new roads, parking areas and sidewalks.

Today, a stay at Novo Selo — considered one of Europe’s premier training areas — is like bunking on an American base in the middle of nowhere. Given the current political unrest in eastern Europe, U.S. military members can expect to become more comfortable with deployments to a country many probably couldn’t find on a map.

Nestled between mountains and picturesque fields of sunflowers and grapevines, the training area in this former Warsaw Pact country is expected to host more U.S. and NATO troops in the coming year as the United States seeks to increase military cooperation with its Bulgarian partners, strengthen security in the region and reassure eastern European allies nervous that Russia might be eyeing their territory.

The first of three six-month rotations of about 150 Marines, part of the Black Sea Rotational Force, is due at Novo Selo in September. Soldiers from 3rd Infantry Division are set to arrive this fall for a 90-day rotation with plans to train with the Bulgarians, said U.S. Army Col. Ronald Bahr, Black Sea area support team director and the U.S. installation commander for Novo Selo and Mihail Kogalniceanu Air Base in Romania.

In the nearly three years she’s held her post, she said, “we have been working on broadening and deepening the relationship” between the two countries. Earlier this year, U.S. Secretary of State John Kerry visited Bulgaria, and “we decided to establish bilateral working groups between our two countries.”

“That’s in a number of different areas and it complements the cooperation we have in defense and security,” she said.

Ries was among a group of U.S. and Bulgarian officials to visit Novo Selo late last month to observe a rare live-fire exercise involving American tanks.

Many of the U.S. soldiers in the exercise were deployed to Germany from the States and welcomed the chance to train briefly in Bulgaria.

More than an empty field Construction on the U.S. side of the base began well before Russia muscled its way into Ukraine territory after the fall in 2014 of a pro-Russian government that had backed away from closer ties to the European Union.

In the wake of that crisis, the staging of a U.S.-friendly forward-operating base about an hour’s drive from the Black Sea seems prescient.

The 2006 defense cooperation agreement gave the U.S. access to and shared-use of three Bulgarian military bases, two years after Bulgaria joined NATO. The agreement marked the first time foreign forces were authorized for extended use of Bulgarian military facilities. A similar agreement was signed a year earlier with Romania, Bulgaria’s neighbor to the north, which borders a small section of Ukraine along its northwestern coast of the Black Sea.

Even though occupied with the wars in Iraq and Afghanistan, the U.S. conducted regular training in Bulgaria and Romania, aimed at building relationships with those militaries, both of which fought alongside U.S. troops. But Russia’s incursion into Ukraine has somewhat shifted the focus of the U.S.-led joint training in the region.

“There is a concern, in my opinion, because for a lot of years going back, Bulgaria was connected to Russia,” Zelev said. “Now a lot of people are concerned about Ukraine and what’s going on in Ukraine.”

Under the agreement, the U.S. can deploy up to 2,500 troops at Novo Selo; the base can hold as many as 5,000 during joint-nation exercises with NATO allies, Zelev said.

“Before there was nothing. It was just an empty field,” he said of the area where the Americans built their portion of the base.

“It’s not like a Hohenfels or (Grafenwöhr) or anything like that, but for eastern Europe, it’s one of the larger training areas,” Bahr said. “Just the way the training area’s laid out, it allows them to fire some of the heavier weapons systems here because the mountains contain it.”

There aren’t many limitations to what type of training troops can conduct on the 5-by-12-mile range, which Bahr described as “literally right out the back gate.”

Firing missiles from an aircraft isn’t out of the question, either. To Bahr’s knowledge, that hasn’t been done with the U.S. Air Force, but “it’s in the works.”

Though the base construction is mostly finished, more European Reassurance Initiative dollars are trickling in to upgrade the training ranges this year and next, Bahr said. There are also plans to add a helicopter landing zone and an air operations building, he said.

U.S. Defense Secretary Ash Carter announced in late June the “temporary” placement by next summer of 250 armored vehicles in three Baltic countries, as well as Bulgaria, Romania and Poland.

Though U.S. military and Bulgarian officials say it’s too early to say whether U.S. tanks will be positioned at Novo Selo, it’s a likely location, since “this is where the tanks train,” Zelev said.

One of its tasks is to assess where to place a NATO maintenance support area, which would be primarily for tanks but could support other equipment, Beadle said.

The assessment is focused on two cities, Sliven and Plovdiv. The former is about 12 miles west of Novo Selo, making it a preferable site for its proximity.

“This is the area where we shoot NATO tanks and Bulgarian tanks,” Beadle said. “Americans shoot tanks here, Germany (and) England. This is where it’s approved.”

The support center would bring about 50 specialized jobs and close to $250,000 into the economy, he said.

The civil affairs teams also are looking at whether the local labor pool has the skills to maintain tanks and other equipment, he said. Bulgarian reservists and retirees that worked on Bulgarian and Russian tanks and now live in Sliven, for example, are possible candidates. “Ultimately the skill set of working on tracks and turrets, it’s going to be universal with a little bit of training,” Beadle said.

Soldiers at the recent live-fire exercise said their experience training with the Bulgarians was memorable.

“I’ve never seen a T-72 in person,” he said of Bulgaria’s Soviet-era tanks. “Before we actually went out, they took pictures of our tanks; we got in their tanks. It was fun to interact with them.”

The training, however, also had a serious side.

The exercise was a culmination of 90 days of working with the Bulgarians, Wood said.

“Showing that we can come together in one full-scale attack or defense if necessary, if the need arises, if Bulgaria calls us to help them in anything they need.”