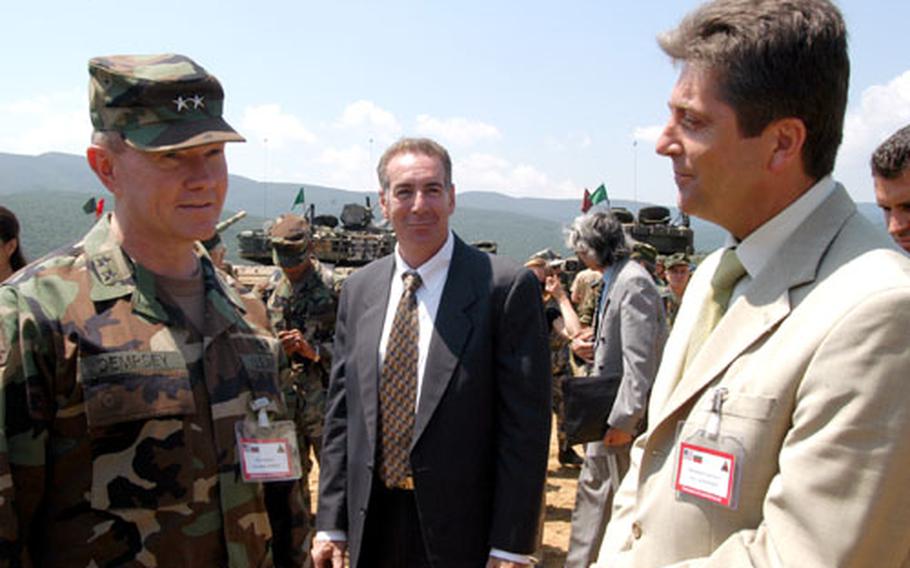 NOVO SELO TRAINING AREA, Bulgaria &#8212; Bulgaria&#8217;s president gave an optimistic assessment of negotiations between his country and the United States over U.S. military access to Bulgarian bases during a visit Monday to the country&#8217;s main army training base.

The visit coincided with the start of a weeklong process in which the country&#8217;s Socialist Party, which won the most votes in June&#8217;s parliamentary election, will take a leading role in forming a new government for the first time in nearly a decade. The Socialists campaigned on a platform that included pulling Bulgarian troops out of Iraq.

&#8220;The Bulgarian institutions have spoken in favor of [U.S.] access to our fields and infrastructure,&#8221; President Georgi Parvanov said through a translator during an interview with Stars and Stripes.

Parvanov is a member of the Bulgarian Socialist Party and has supported a larger U.S. military presence in the country.

Bulgarian and U.S. officials have not revealed details of negotiations for more access to Novo Selo and Bezmer Air Base, both near Sliven, although they have said they expect to reach an agreement by fall.

Some key questions include whether the U.S. military will use the areas as forward operating bases from which troops could deploy to combat, how often the military would conduct training in the country, how many military officials would have a permanent presence here and how much the Unites States would pay.

The country&#8217;s deputy defense minister, Ilko Dimitrov, said that he expects the bases to remain small with a relatively small number of U.S. troops coming more frequently for training but not staying permanently.

Parvanov met with Maj. Gen. Martin Dempsey, commander of the 1st Armored Division, and Brig. Gen. Michael Tucker, 1st AD&#8217;s assistant division commander-maneuvers, during a three-hour visit in which he received a positive assessment of his country&#8217;s training facilities.

He stressed the importance of joint training with the United States now that his country is a member of the North Atlantic Treaty Organization.

Bulgaria joined NATO last year and is scheduled to join the European Union in 2007.

Talking with Dempsey after the exercise, Parvanov said he was impressed with what he saw.

&#8220;One can see that they are good professionals at first glance,&#8221; Parvanov said in English.

Dempsey said the exercise completed a loop for 1st AD soldiers, some who served with Bulgarian soldiers in Iraq last year.

Bulgaria has 480 soldiers serving in Iraq and 60 in Afghanistan. The United States announced this month that it would give the country $15 million to support its efforts abroad.