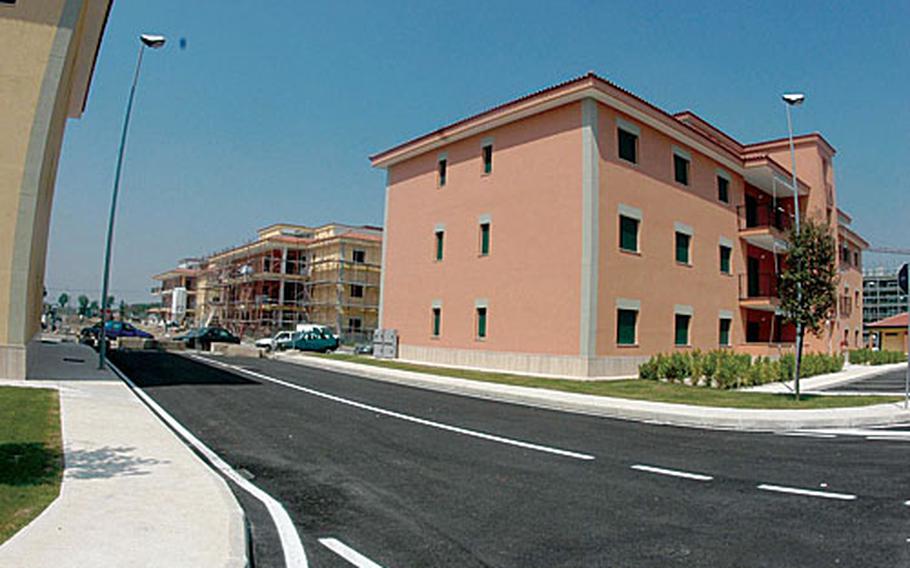 The salmon-colored building houses new, four-bedroom apartments for officers at the support site base in Gricignano, and behind it, construction crews work on a building of three-bedroom officer apartments. (Sandra Jontz / S&S)

The salmon-colored building houses new, four-bedroom apartments for officers at the support site base in Gricignano, and behind it, construction crews work on a building of three-bedroom officer apartments. (Sandra Jontz / S&S) 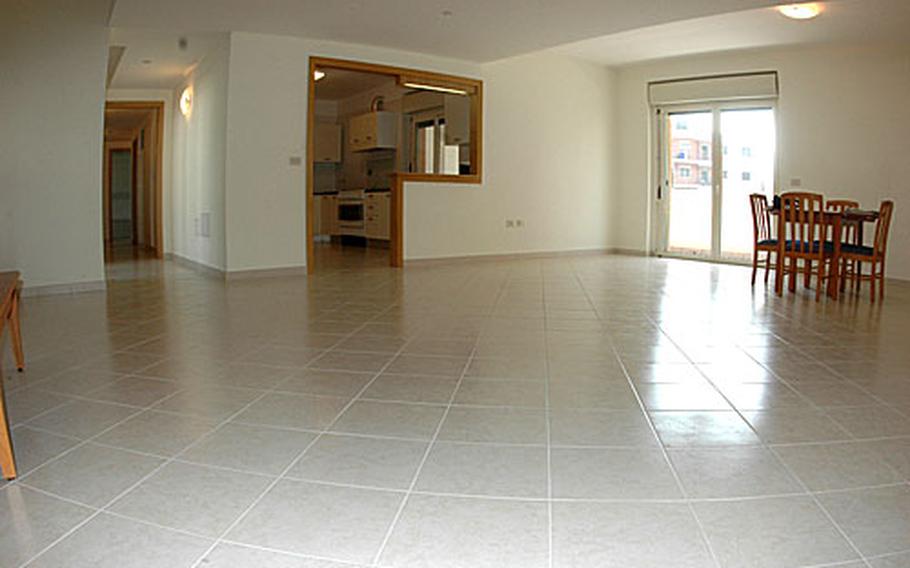 An open living room in a three-bedroom office apartment is touted as a selling point by housing officials. (Sandra Jontz / S&S)

The housing at Gricignano Support Site is expanding by 114 new units, all designated for officers, command master chiefs and civilians who qualify. The bulk of the new apartments should be finished by September, but 36 officer apartments will be ready for move-in by early May, said Linda Crusing, Naval Support Activity Naples&#8217; housing director.

The completed units will bring to 995 the total number of housing units on the support site base, six of which are single-family houses for senior officers, six are townhouses, and the remaining 983 are officer and enlisted apartments.

Italian contractors built the family housing on the support site, and true to most Italian-style homes, apartments didn&#8217;t come with the luxury of built-in closets, Crusing said. The new apartments not only have closets, but built-in sprinkler systems and an emergency shutoff valve in the event of a gas leak.

Military personnel will have priority, but civilians can apply to rent the apartments, Crusing said. While the houses are built for active-duty military, the base commander will consider renting to civilians because occupancy at the support site is low, she said.

The Navy leases the property from Mirabella, and does not pay for the construction. However, the base rents the houses, and the annual rent for 119 units &#8212; the new 114 apartments and five villas on the base &#8212; is about $2.5 million. The breakdown translates to a cost of about $21,000 in rent a year for each apartment or house.

Annual overseas housing allowance caps for the eligible officers range from $23,496 to $38,592 per year if they were to live on the economy.

By comparison, the older apartments rent for nearly $16,000 a year for three-bedroom units and nearly $18,000 for the four-bedroom. Unfortunately for residents, base officials have no plans to retrofit existing houses and apartments with the amenities.