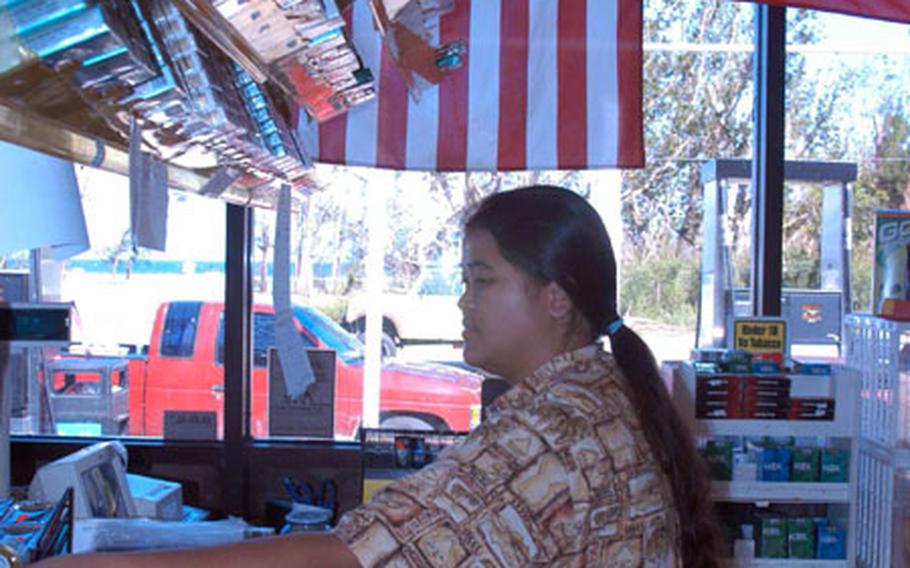 A cashier at a gas station in southern Guam waits on customers, while the Guam and U.S. flags hang in the window. (Jennifer Svan / S&S)

Two months ago, the plane was about 80 percent full, she added.

The flight illustrates the tropical island&#8217;s economic health. As more tourists stay away, the airline&#8217;s empty seats translate into empty tables at Guam&#8217;s restaurants, empty rooms in Guam&#8217;s hotels and empty wallets in a place that depends on tourism for much of its income.

So the largest island between Hawaii and the Philippines called in &#8230; well, not the cavalry. More like the Navy. And the Air Force. Marine contingents are welcome, too. Guam, in short, is betting the U.S. military can cure its economic flu.

The medicine was evident in late February, as Guam hosted the USS Carl Vinson, a nuclear-powered aircraft carrier on a scheduled Pacific cruise. The carrier&#8217;s first visit to Guam &#8220;brought in about $3.5 million to $4 million,&#8221; said Carl Peterson, a Guam Chamber of Commerce member.

Small wonder pro-military and pro-American signs cover walls and displays in Guam&#8217;s Tumon tourist district and outside mom-and-pop shops across the island. Red, white and blue hanging in storefronts lends a small-town America feel to this rock 3,400 miles southwest of Hawaii.

Guam&#8217;s native Chamorros assert that their patriotism runs deeper than the dollar. Liberation Day, to commemorate the Marines&#8217; 1944 landing on Asan Beach, which ended Japanese forces&#8217; brutal occupation, is among the island&#8217;s biggest celebrations.

&#8220;We have had more casualties of our Chamorron men and women in past wars, per capita, than any other state,&#8221; said Delegate Madeleine Bordallo, Guam&#8217;s non-voting representative in Congress.

Filamore Palomo Alcon, owner of the Guam Gallery of Art in Chamorro Village, was in the Air Force for more than eight years. An American flag went up next to his cash register after Sept. 11, 2001.

Few servicemembers shop for the local souvenirs and artwork Alcon sells, he said, but their presence still helps business.

On a breezy Saturday evening in the Tumon district, the two Seabees said they&#8217;d spend $100 or more before they called it a night: souvenirs for Ducote&#8217;s son, hamburgers and fries at an oceanside caf&#233; and maybe the bars or strip clubs later on.

Peterson said the island also hopes to dredge its port so it can court a rather large new resident: a permanently stationed nuclear aircraft carrier.

&#8220;It&#8217;s our big issue,&#8221; he said, referring to speculation that a nuclear-powered aircraft carrier will be assigned to the Pacific after the conventionally powered USS Kitty Hawk at Yokosuka Naval Base is decommissioned in 2008. Japanese law prohibits nuclear-powered vessels from being stationed there.

Guam&#8217;s Chamber of Commerce wrote key military leaders, government officials and the president in May 2002, outlining the island&#8217;s strategic significance and how that could benefit the U.S. and Guam governments.

&#8220;The people of Guam &#8230; fully endorse the Chamber&#8217;s goal of diversifying our economic base by attracting more military units,&#8221; the Chamber wrote, noting that &#8220;Department of Defense spending is Guam&#8217;s second largest industry and integral to future economic growth.&#8221;

For instance, Navy Capt. Joseph Mulloy, commander of the three-sub squadron based at Polaris Point, Guam, said each vessel contributes &#8220;about $6.5 million&#8221; to the local economy &#8212; including sailors&#8217; salaries and visits from friends and family.

Now, 30 to 40 servicemembers are expected any given weekend. With more than 13,000 servicemembers already living on Guam, the resort wants more of them. It advertises its military discount in the local paper, she said, and it recently threw in a free lunch for GIs.

The buildup also has helped Guam real estate brokers. About 99 percent of Norma del Carmen&#8217;s customers are military members and their families, she said, adding that Guam has one of the largest overseas housing allowances. Landlords set their prices accordingly; beachside rentals can average more than $2,000 per month, she said.