Building continues as if the U.S. is staying in Germany 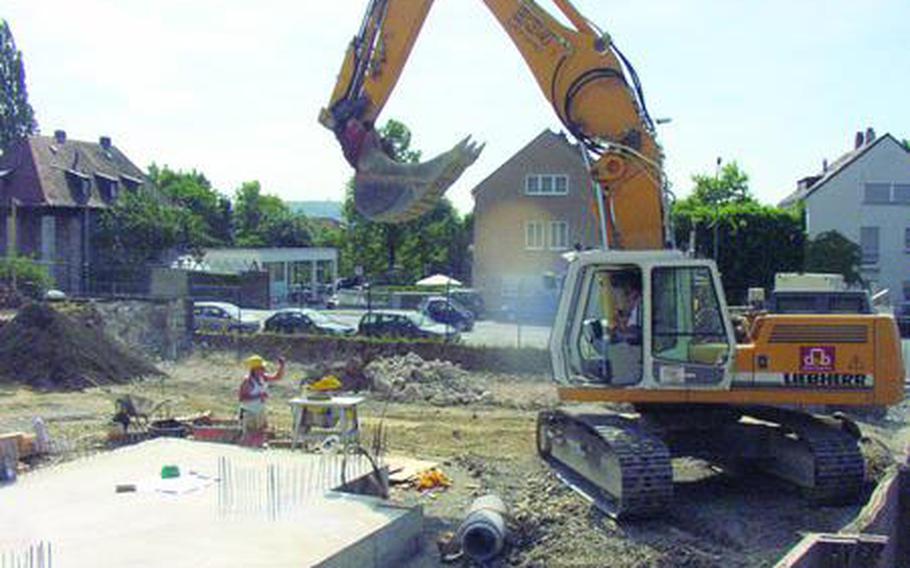 Workers began work in June on a $2.2 million project to upgrade security gates at the Würzburg Army Hospital, Germany. The construction work includes the addition of a guard house and second traffic lane. Some people wonder why construction continues when the U.S. is expected to close some bases in Europe. (Steve Liewer / S&S)

KITZINGEN, Germany &#8212; Construction workers continue to bulldoze and jackhammer at the front gate of Kitzingen&#8217;s Larson Barracks, busily building an upgrade to better protect soldiers from the threat of terrorist attack.

Costing more than $1 million, the Larson front gate is one of dozens of construction projects, small and large, continuing at bases that are expected to close soon after the 1st Infantry Division&#8217;s departure from Germany next year.

Many people are asking why the Army still is spending millions to improve bases that will be handed over to the Germans in just a few years. The answer, say engineers from the W&#252;rzburg-based 98th Area Support Group, is that the spigot of building funds isn&#8217;t that easy to shut off. Ending projects once the ground has been broken doesn&#8217;t save money. And the support groups and battalions that run the bases didn&#8217;t know about base-closure plans until a few weeks ago, forcing them to plan as if the bases are remaining open.

The 98th ASG includes the military communities in Ansbach, Illesheim, Bamberg, W&#252;rzburg, Schweinfurt, Kitzingen and Giebelstadt. Only Ansbach and Illesheim are expected to remain in U.S. hands over the long term.

The construction managers say that the flow of construction cash has slowed in recent years. The ASG spent nearly $206 million between 2001 and 2004 (figures for the current fiscal year, 2005, and next year, 2006, aren&#8217;t available, according to an ASG spokesman), three-fourths of it at bases the Pentagon plans to turn over in the next few years. Construction funding fell from $73.9 million in 2002 to $42.6 million in 2004.

Two years ago, the Army cancelled or delayed $270 million worth of planned construction in the 98th ASG, most of it for the renovation of barracks and family housing.

Although the broad outlines of the Army&#8217;s planned force reduction in Germany have been known for more than two years, the Pentagon didn&#8217;t announce any specifics until July 29. That&#8217;s when the Army community in Germany learned for certain that bases in Giebelstadt and Kitzingen would revert to German control in 2007, and W&#252;rzburg&#8217;s Army Hospital and Leighton Barracks (the current 1st ID headquarters) would be turned over sometime later. The fate of bases in Schweinfurt and Bamberg aren&#8217;t yet clear, but they haven&#8217;t been included on U.S. Army Europe&#8217;s list of &#8220;enduring bases.&#8221;

Until the announcement, the ASG and its parent command, Installation Management Agency-Europe, let buildings and major renovations continue.

After the July 29 announcement, Needham said, construction managers checked a list of some 200 current projects to see what could be scrubbed. The ASG has recommended that six to 12 be cut. The rest, he said, had already begun and so would continue.

Several, though, have been halted in the design phase, including a $400,000 renovation of the gym at Kitzingen&#8217;s Harvey Barracks; $1.6 million worth of upgrades to a refueling station and water plant at Larson Barracks; and a $1 million reconstruction of Harvey&#8217;s recently reopened west gate.

But projects geared towards keeping soldiers safe &#8212; like the $5.9 million worth of front-gate upgrades at bases and housing areas in Kitzingen, Schweinfurt and Giebelstadt &#8212; will continue until they are finished.

Soon, though, there will be few if any soldiers left there to protect.