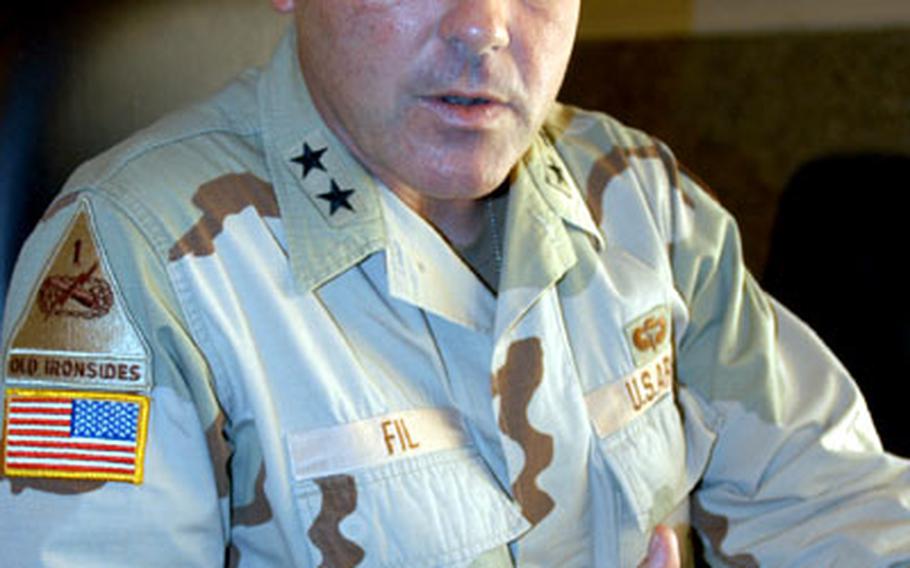 &#8220;We are learning from current events,&#8221; said Fil, commander of the Civilian Police Assistance Training Team, or CPATT, charged with organizing, training, equipping and mentoring the entire Iraqi police force.

&#8220;Late last summer, early fall, it was evident that normal police techniques were insufficient against the very lethal, well-organized, viscous threat aimed at coalition and police forces. So a fighting police force was required, without creating another army,&#8221; the 51-year-old Portola Valley, Calif., native said.

That meant equipping police forces with body armor and rifles, instead of just badges and handguns. It meant building a mock police station at the Baghdad Police Academy where recruits could learn to fortify their stations against attacks. It meant creating teams of specialized police members in areas of specialized weapons and tactics and emergency response units, Fil said.

CPATT was given the task of creating an Iraqi police force 135,000 strong as quickly as possible, which initially meant sacrificing quality for quantity.

But, &#8220;there never was the intent to just fill the ranks with bodies,&#8221; Fil said. Initial recruits had some police or military background. CPATT&#8217;s mission now focuses on graduating quality officers and expanding training centers from a three-week curriculum to eight weeks.

CPATT is about a year old in name. But two years ago, six police advisers from the United States arrived to assess the Iraqi police force, from personnel to infrastructure. It might as well have been nonexistent, said Richard Miller, one of the initial six and now CPATT&#8217;s deputy commander.

Equipment and vehicles disappeared via hands of looters and &#8220;a lot of police deserted during the invasion,&#8221; said Miller, a former New Mexico state police officer.

The remaining force went against &#8220;all Western hallmarks of a good police department. There was no respect for human rights, no fair and impartial treatment. The [former force] had been trained as a paramilitary force and were instruments of the oppression used to manage the populace,&#8221; Miller said.

The No. 1 need: men. And they needed to be equipped with guns and vehicles, he said. Second, they needed training in human rights, basic policing skills and marksmanship.

Then came the insurgency.

&#8220;The key to overcoming the insurgency is having an adequate number of reasonably well-trained police officers,&#8221; Miller said.

The high unemployment rate helps. It drives recruits seeking work to police stations in hopes of being selected for training and employment, said Jim Adams, chief of CPATT&#8217;s institutional development.

With few jobs available, young men, and some women, flock to the police corps. The high unemployment makes for an employer&#8217;s market, where they can be choosier in selecting higher-quality candidates for the academies, Adams said.

Col. Bryan Watters, a British soldier serving as CPATT&#8217;s director for policy and plans, likened the process to the wagon trains that set off to discover the wild, Wild West of the United States. The insurgent attacks on Iraqi police caught planners and police off guard; and when the band of westward voyagers &#8220;crested the first hill, a whole lot of Indians were on the other side and we said, &#8216;Bugger.&#8217;&#8221;

Developing democracy in Iraq is a delicate dance in which the U.S.-led coalition and the new Iraqi institutions must take turns leading and following.

It&#8217;ll mean developing a concept of empowerment, from the top down. In a culture where knowledge was power, and knowledge was not shared with the rank and file, it will take time for Iraqi leaders to learn to disseminate information, Watters said.

CPATT&#8217;s success hangs in a balance, where leaders have to develop a program to bow out at the right time, Watters said. Too prematurely, and the new force will fail. Too late, and Iraqis could become too dependent on the coalition.