Building an army for Afghanistan 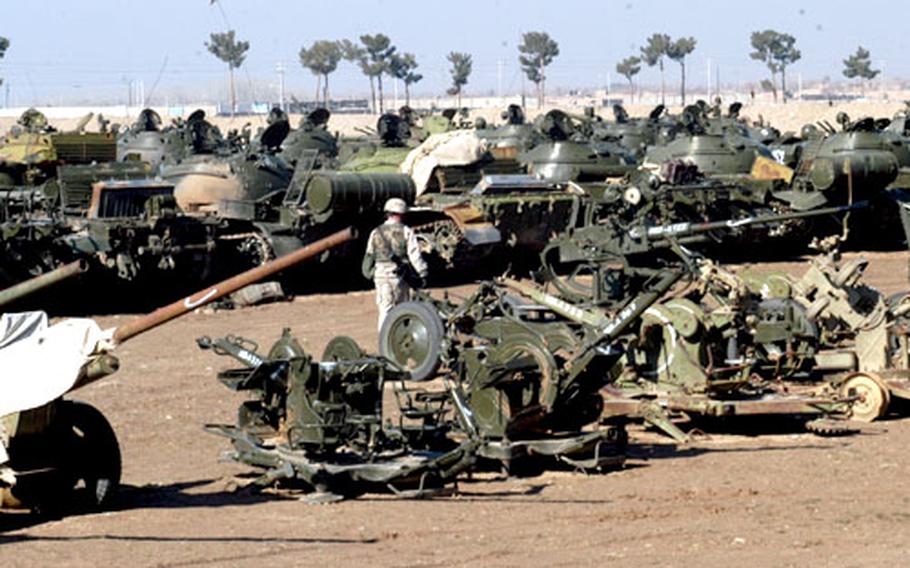 Scores of tanks, artillery guns and armored personnel carriers, most of them of Soviet vintage, are parked in a lot near the Herat Airport. The weapons were turned in last year by regional leader Ismail Khan. Walking through the lot is Army Staff Sgt. Wesley Sosh, Company C, 151st Infantry Battalion, 76th Infantry Brigade, Indiana National Guard. Eventually all of this equipment will be used by the Afghanistan National Army. (Kevin Dougherty / S&S)

Scores of tanks, artillery guns and armored personnel carriers, most of them of Soviet vintage, are parked in a lot near the Herat Airport. The weapons were turned in last year by regional leader Ismail Khan. Walking through the lot is Army Staff Sgt. Wesley Sosh, Company C, 151st Infantry Battalion, 76th Infantry Brigade, Indiana National Guard. Eventually all of this equipment will be used by the Afghanistan National Army. (Kevin Dougherty / S&S) 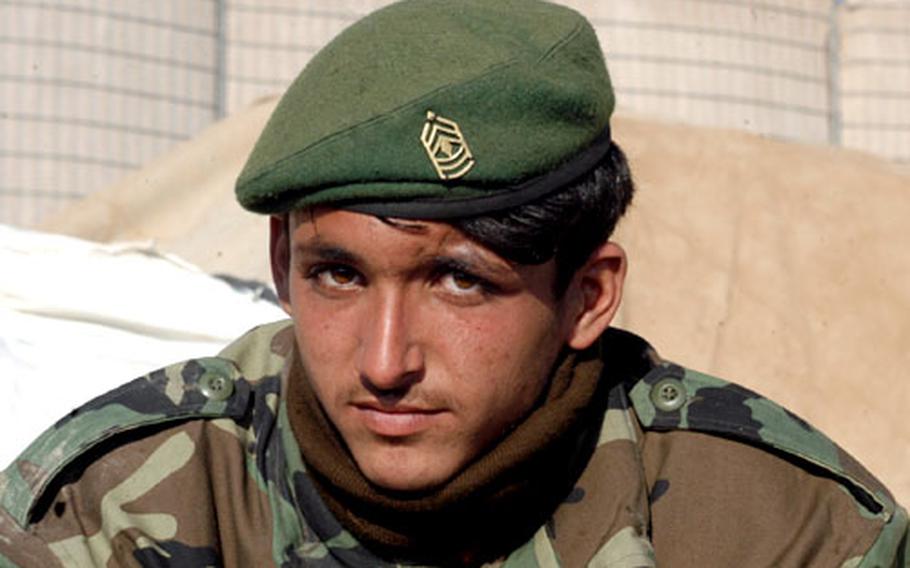 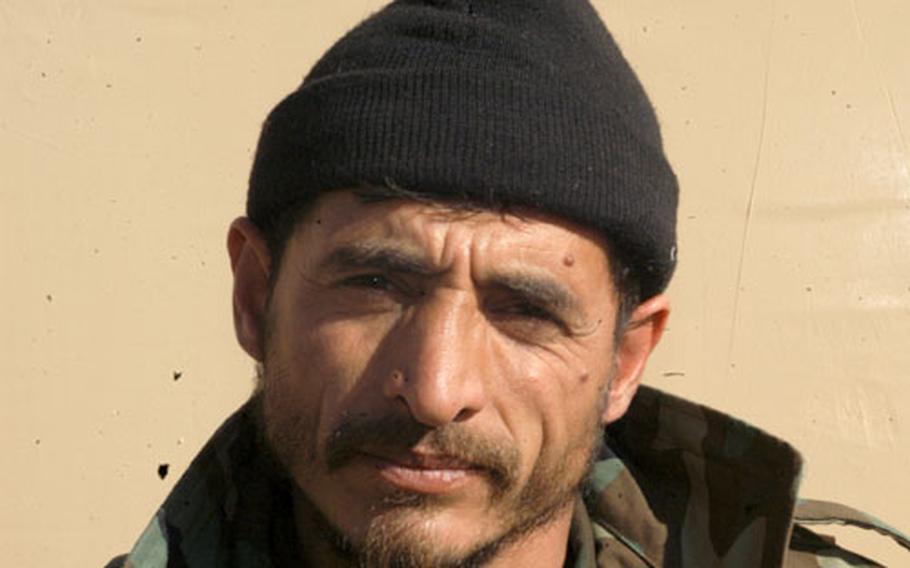 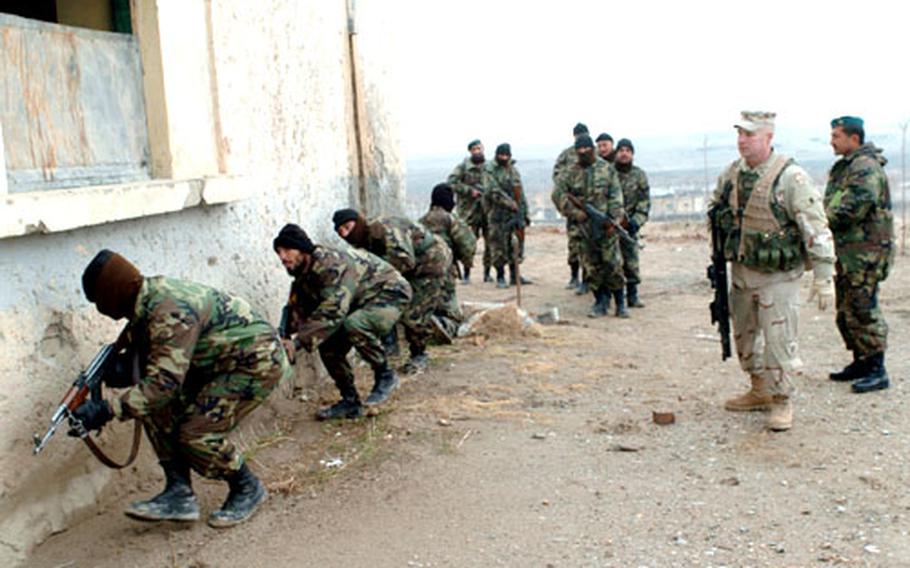 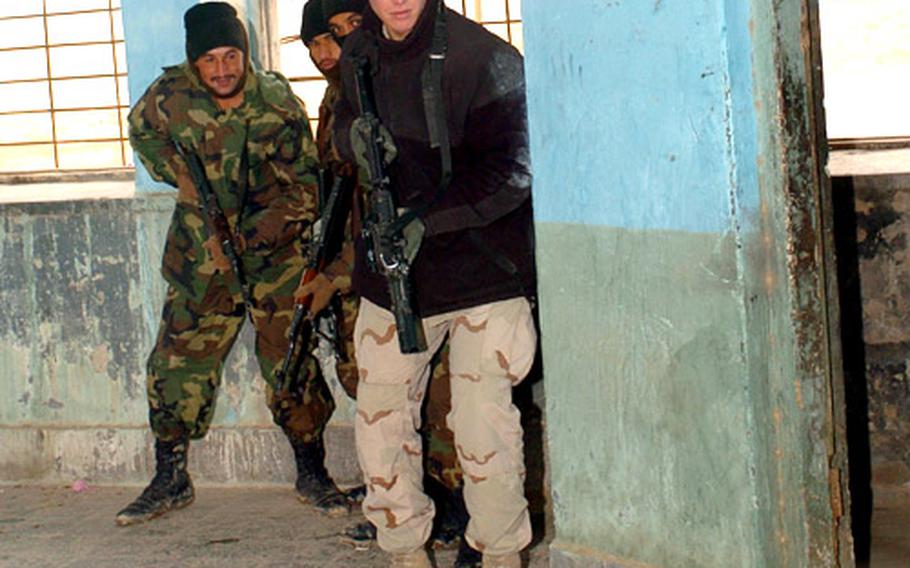 KABUL, Afghanistan &#8212; One soldier is satisfied, while another isn&#8217;t so pleased with the way things have gone for him in western Afghanistan.

Both have concerns, mainly over money, career paths and family support. Yet each is proud to wear the uniform and appreciate the respect it engenders in their countrymen.

Rather, they are part of a grand undertaking known as the Afghanistan National Army. It&#8217;s a work in progress, one that will pay huge dividends if Afghanistan and its allies &#8212; most notably the United States &#8212; can pull it off.

While often compared to its Iraqi army counterpart, the smaller Afghan force has taken tremendous strides in the past three years, U.S. and Afghan officials said.

The Afghan army still has some distance to cover, but the road of apprenticeship doesn&#8217;t appear to be as long or as problematic, providing the United States and its allies continue the effort, dubbed Task Force Phoenix.

Or, so dangerous, if the armed Afghan is fighting against coalition forces.

But after two decades of fighting, many in Afghanistan seem war-weary, based on conversations with Afghans in the south, east and west.

That new army now has roughly 18,000 combat soldiers, according to Moorhead. More than 3,000 Afghans are in a three-step, 20-week training regimen that concludes with a unit assignment.

Launched in June 2003, the task force started slowly, focused for the first year primarily on the infantry. Recruits were tested and evaluated to determine if they were junior enlisted, senior enlisted or officer material. Additionally, U.S., French and British trainers kept an eye out for recruits who would one day take over as instructors.

About a year ago, the task force turned over basic-training duties to those handpicked candidates. Moorhead said the plan is to do the same this April with the command and staff school, which the French army oversees. Later this year, the British will hand their clipboards to Afghan instructors chosen to conduct the senior noncommissioned officer school.

While the focus has been on combat forces, incrementally the coalition has been building up the support sector &#8212; such as training, logistics and communications &#8212; and it has been filling billets within the Afghanistan Ministry of Defense. By 2007, there will be about 3,000 troops and civilians assigned to the ministry and roughly 21,000 to 22,000 on the support side.

In addition, various commands and agencies are being created, including a new military academy that will open its doors next month to 120 cadets.

The ANA consists of five corps. The first was the 201st based in Kabul, which became fully staffed in May. In September, four regional corps came on line in Kandahar, Gardez, Mazar-e-Sharif and Herat.

Other components are falling into place. Two months ago, the Afghans, with coalition input, drafted a military justice code.

Sayar, the chief of staff for the Herat Corps, is one of the Afghan soldiers helping to make that happen. Through an interpreter, he ticked off a list of issues his staff is addressing, from pay and leave to supply and medicine.

But the most significant thing Afghan military leaders can do, he said, is &#8220;to keep the promises made to recruits.&#8221;

Such talk might be enough to keep Latif in the fold.

Based in Herat, Latif wants to serve, but said his $160-a-month salary is barely enough to support his wife and six kids. A seasoned fighter, the 32-year-old driver/mechanic is weighing his options. He may join the quick reaction force &#8212; and nearly double his salary &#8212; or he may quit, go home to Kabul and open his own garage.

If the army offered adequate family housing and more money, said Latif, who fought the Taliban as a member of the Northern Alliance, &#8220;I would stay forever.&#8221;

Afghan National Army at a glance

Future:Will develop an air force to move troops around the country