Building a better base: Several facilities at RAF Mildenhall in plans for renovation 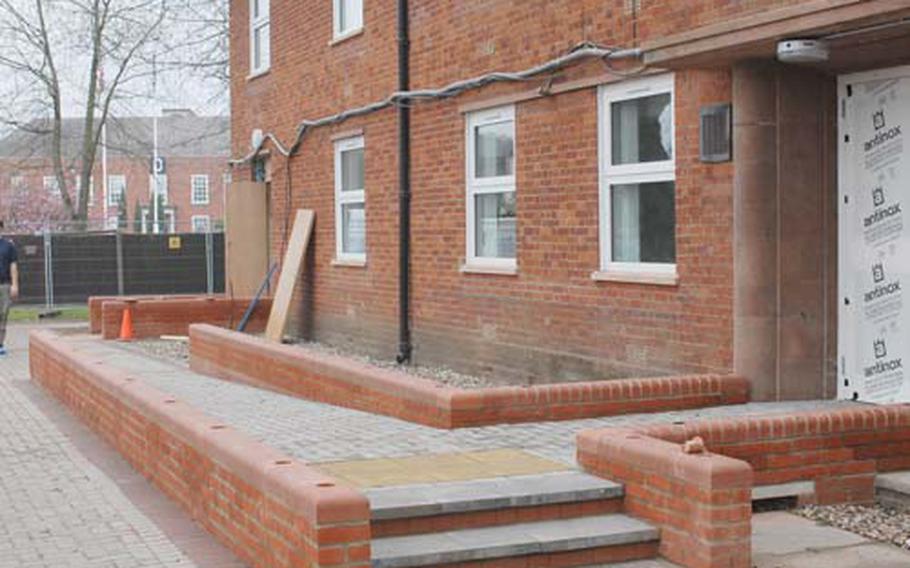 The renovation work on RAF Mildenhall’s Building 450 includes adding ramps to outside entrances and exits to bring the facility into compliance with the Americans with Disabilities Act and British building codes. The building is scheduled to be turned over to the base later this month, once a $4 million renovation is completed. (Mark Abramson/S&S)

The renovation work on RAF Mildenhall’s Building 450 includes adding ramps to outside entrances and exits to bring the facility into compliance with the Americans with Disabilities Act and British building codes. The building is scheduled to be turned over to the base later this month, once a $4 million renovation is completed. (Mark Abramson/S&S) 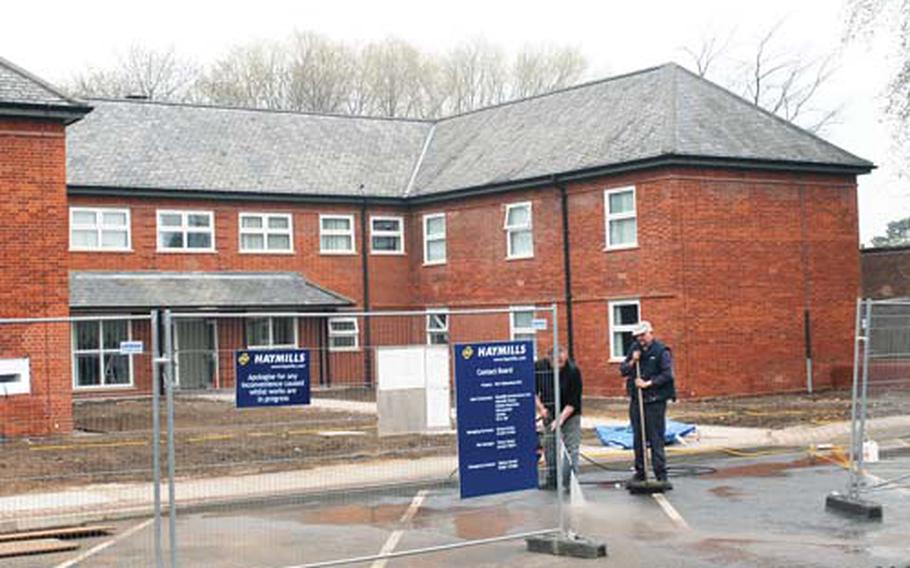 Building 450 at RAF Mildenhall is scheduled to be turned over to the base later this month, once a $4 million renovation is completed. The building is one of several renovation projects on the base designed to modernize the installation’s pre-World War II-era red brick buildings. (Mark Abramson/S&S)

AF Mildenhall is in the midst of a multimillion-dollar makeover aimed at modernizing some of the pre-World War II-era buildings while keeping their classic red brick exteriors intact.

The work involved gutting the 13,500-square-foot building and installing underpinnings on its east end because the building had sunk about 8 inches, said Chris Nicholson, U.S. project manager for the 100th Civil Engineering Squadron.

Nicholson joked that people told him that they would watch their pens roll downhill off their desks on the east side of the building.

"It will look modern; it will feel modern," Nicholson said of the renovated building. "We are on budget and on time."

The building&#8217;s old concrete stairs have been replaced with oak stairs. And the building meets British building standards and U.S. laws on accessibility for the handicapped, said Doug Rush, 100th Civil Engineering Squadron flight manager. Those requirements meant adding ramps to exits and replacing the front steps with a longer, level path to the building, he added.

Base officials said the renovations are designed to improve work space efficiency, enable units to consolidate their staffs and simply upgrade facilities that haven&#8217;t been spruced up in decades. In many cases, walls are being taken out, creating more open areas and additional work space, Rush said.

RAF Mildenhall is seeking a total of $13 million in funds for the renovations throughout the base, Rush said. Some of that funding has already been obtained.

Work has recently begun on renovating Building 464 at a cost of up to $4.5 million, Rush pointed out. And buildings 435 and 447 will be renovated inside as well at a total cost of $2.4 million. The base wants to renovate buildings 440 and 427, but has not secured funding for those projects, Rush said.

Buildings 464, 435 and 440 house the 100th Force Support Squadron. The American Red Cross is also in building 440. Building 447 houses the U.K. Ministry of Defence Administration and Management Section, which oversees the MOD civilian employees on base. The Education Center is in Building 427.

Mildenhall also has the funds to do a feasibility study to renovate Building 238, which is the 100th Air Refueling Wing&#8217;s headquarters across from the movie theater, Rush said. That building could use some remodeling because it has vaults and other features that are no longer needed now that the Cold War has ended, he said.