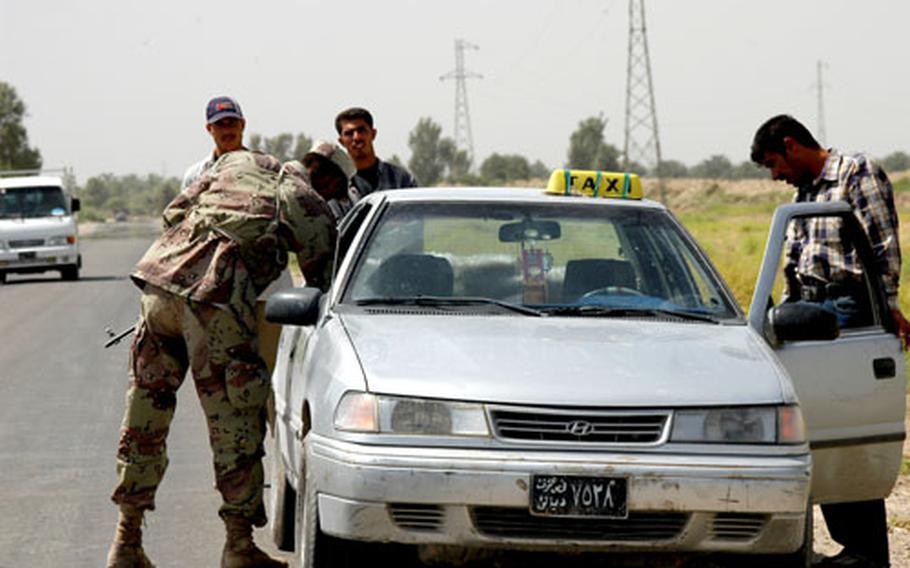 Iraqi soldiers stop a car at a checkpoint south of Buhriz before letting it out of town Tuesday. The town of 57,000 has been surrounded by troops for more than a week as the Iraqis and Americans try to stem the insurgency that has dwelled there for the past few months. (Teri Weaver / S&S)

Iraqi soldiers stop a car at a checkpoint south of Buhriz before letting it out of town Tuesday. The town of 57,000 has been surrounded by troops for more than a week as the Iraqis and Americans try to stem the insurgency that has dwelled there for the past few months. (Teri Weaver / S&S) Two men stand at a drink stand in Buhriz’s central market, the heart of this farming community. The people in the town, military leaders acknowledged last week, are growing frustrated by the lock down. (Teri Weaver / S&S)

Buhriz, a town of 57,000, was taken over by Iraqi soldiers, police and politicians. They enclosed the city, fired the city council and mayor and raided dozens of homes and farms. They seized the town to take it out of the grasp of insurgents who had bullied their way in and were using the farming community as a haven, Iraqi and U.S. military leaders said.

Insurgents were using Buhriz as a headquarters while making a deal with local leaders that they would direct the violence elsewhere, U.S. military leaders said. That promise of peace, however, didn&#8217;t extend to uniformed soldiers.

In the middle of May, an Iraqi major was killed. On May 26, a Kiowa helicopter was shot down and two U.S. pilots died. Then, on June 18, a homemade bomb killed three American soldiers and their translator.

The next day, Iraqi soldiers and police surrounded the town. The Iraqi governor for the area gave the city leaders a week to turn over information about the insurgents, a demand they failed to meet, Salazar said.

U.S. and Iraqi forces detained more than two dozen people. During the first night of the siege, the U.S. military bombarded the city&#8217;s palm groves, which serve as its western border, with mortar rounds every 15 minutes.

In the initial hours, Iraqi soldiers uncovered enough explosives hidden in the town to make 160 homemade bombs, according to U.S. officers involved in the raid. Ultimately, one U.S. soldier said, the military would like to search every single house.

But in taking back the town, the Iraqi leaders here are now facing a different battle. They are trying to win the trust of the people they&#8217;ve surrounded to ferret out more evidence of the insurgency. They want to flood the town with improvements, from picking up trash to irrigating the palm groves.

The Iraqi army officer overseeing the operation is Col. Thear Ismael Abid, a 36-year-old who named the Buhriz siege Operation Sunrise because he said he wants to shine a light on the town&#8217;s insurgency and make the people there believe that it&#8217;s better to drive out violence than live in its midst.

But as the siege extended from its first week into the second, Thear acknowledged that the lock down had lasted a long time. At a meeting with Iraqi and U.S. leaders last week, he made an offer to pull his soldiers from the outside of town and begin more street patrols &#8220;so that they don&#8217;t start to hate us and resent us because we have them surrounded.&#8221;

Doing that, however, requires an order from the provincial governor and cooperation from Baqubah&#8217;s mayor, something that might may prove hard to negotiate.

Salazar has pledged $100,000 to go toward small projects throughout the town to show that the government is there to help. But it&#8217;s not so easy to spend American money in Buhriz. The mayor of Baqubah, the larger city next to Buhriz that has become the substitute government since the Buhriz operation began, doesn&#8217;t want the Iraqi military&#8217;s involvement with the improvements. He&#8217;d rather the city and village repair itself and leave the Iraqi army and police on the fringes, according to Lt. Col. Dan Kessler.

Thear is working his own public relations and anti-crime campaign. In the past week, he has passed out fliers in Buhriz to ask for help in rooting out the remaining insurgents. He put his personal cell phone number on the poster, but he&#8217;s frustrated at the lack of calls.

When asked whether the people in Buhriz face danger for telling on their neighbors, he shakes his head.

During the first five days of the siege, no one was allowed to enter or leave the city. On the sixth day, the uniformed men opened the town&#8217;s main north-south artery, allowing cars to pass through checkpoints. Ten days into the siege, security had grown a little lax. The Iraqis were no longer blocking access to and from the palm groves, U.S. leaders discovered at a security meeting Tuesday morning.

Hafith Abd Al-Aziz understands the mistrust in Buhriz. Two years ago, the Iraqi businessman hated the U.S. troops and the new government they brought with them. Now he is an assistant governor in the Diyala province and the editor of an American-created newspaper for Baqubah.

Little by little, he said, the Americans won his trust. It took a long time, he said.