Tourists look at the hundreds of mounted insects at the 2007 Bugspo exhibit at the War Memorial of Korea in Seoul. (Jimmy Norris / S&S)

Tourists look at the hundreds of mounted insects at the 2007 Bugspo exhibit at the War Memorial of Korea in Seoul. (Jimmy Norris / S&S) Kim Jae-yung examines a giant beetle up close at the 2007 Bugspo exhibit at the War Memorial of Korea in Seoul. The exhibit, open until Aug. 26, contains more than 150 displays framed and mounted insects and hands-on live displays for those – like Kim – who are up to the challenge. (Jimmy Norris / S&S) 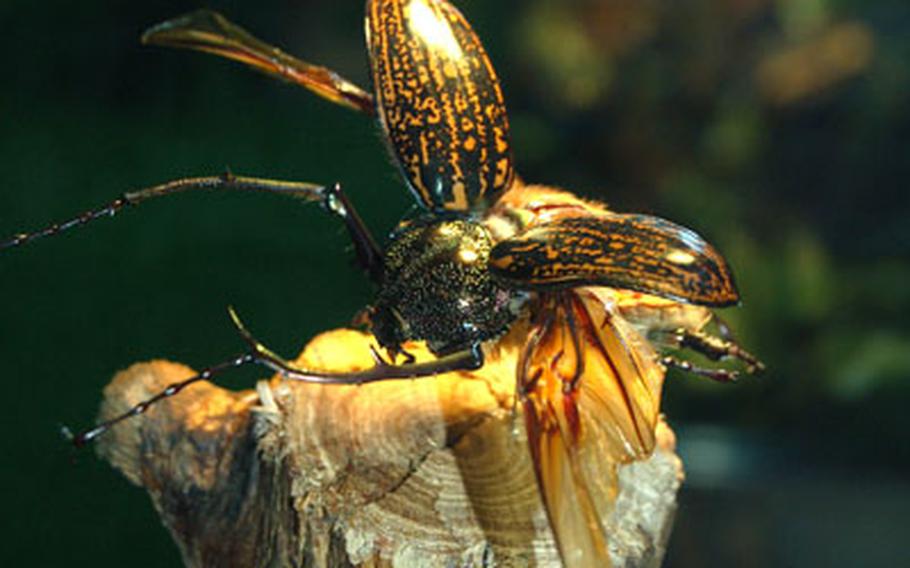 Lifelike displays featuring a variety of insects can be found at the 2007 Bugspo exhibit at the War Memorial of Korea in Seoul. (Jimmy Norris / S&S)

That was my response as the young woman reached into the pool, grabbed something black and skittering and offered me the chance to hold it.

Like many living in Seoul at the height of mosquito season, I thought I&#8217;d had my fill of insects. Most of my interactions with our six-legged friends have been limited to either showing them the sole of my boot or impaling them on fishhooks.

While I had no problem dragging my kids through displays of mounted and artistically arranged butterflies in the name of education, I didn&#8217;t think I was ready to get cuddly with the twitchy things.

Despite my initial misgivings, I did eventually warm up.

The folks at the 2007 Bugspo have taken creatures normally thought of as creepy, disgusting and downright squishable and turned them into something likable, and in some cases even beautiful.

Located on the first floor of the War Memorial of Korea, Bugspo hosts more than 150 displays featuring hundreds of individual insects ranging from framed and mounted butterflies to hands-on displays for the less squeamish.

In addition to the beetles, visitors also get an opportunity to handle a swarm of aquatic and tree-dwelling insects and a nasty-looking three-inch grub worm.

For those not interested in handling the live displays, there are still enough visually appealing formerly live displays to make it worth the two-minute walk from Yongsan Garrison.

Kim said the exhibition is great for children who have lived in the city most of their lives, and have had the opportunity to see only a small variety of insects.

Children also seem to be thrilled with the play area at the far end of the exhibition, which features an elaborate inflatable playground.