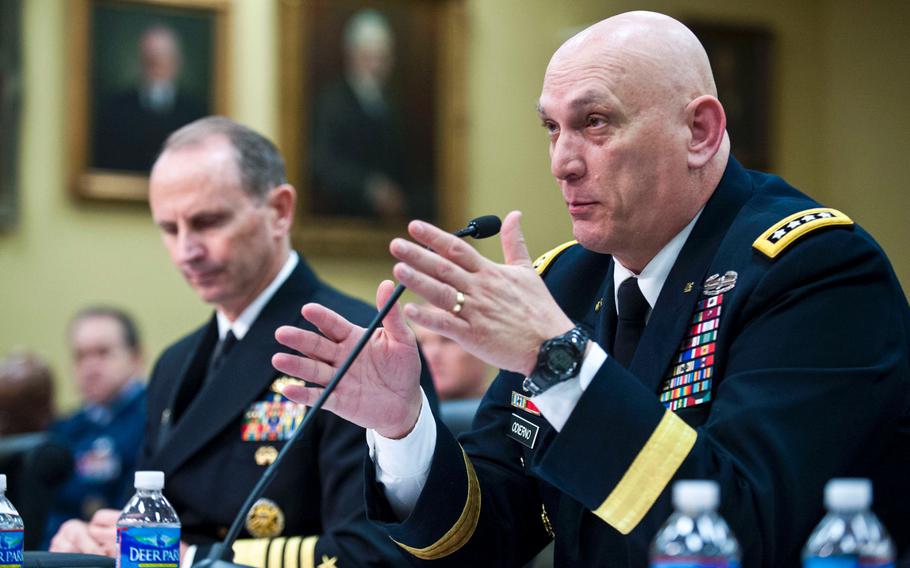 SEOUL — The Army’s chief of staff has warned Congress that steep military budget cuts and canceled training exercises are hurting the Army’s readiness, including the ability to respond to a potential conflict on the tense Korean peninsula.

While troops in South Korea are “obviously at a high state of readiness,” Gen. Ray Odierno told the Senate Armed Services Committee on Tuesday that sequestration has led to a reduction in training for 80 percent of the Army.

The cancellation of the six rotations “is having an impact on our ability to potentially respond to the Korean peninsula, because those decisive action rotations would have helped them to prepare for this eventuality,” Odierno said.

In an exchange with U.S. Sen. John McCain, R-Ariz., Odierno agreed that the rapidly enacted sequestration measures would lead to a hollow Army without experienced leadership.

“Because we’re still involved with some heavy issues in Afghanistan…the full impact of not having the money to train has not fully hit yet. It’s just beginning to hit,” he said.

But the impact of the cuts is particularly worrisome with tensions between Seoul and Pyongyang rising to their highest level in decades. North Korea has made a number of threats, even raising the possibility of a nuclear strike against the United States.

There has been widespread speculation that the North might be preparing to conduct a fourth nuclear test or a missile launch. South Korea has vowed to respond decisively to another provocation, prompting fears that a relatively small incident could escalate out of control.

Odierno said he believes the situation is calming down but that it remains difficult to predict what North Korea’s youthful leader, Kim Jong Un, will do, given that he has such a short track record.

“That’s what makes this such a, in my mind, tense situation, because we simply don’t know what he’s thinking,” Odierno said.

Asked if South Korean defense officials were worried that sequestration would hurt the U.S. military’s readiness, a Ministry of National Defense spokesman said Friday: “We will see.”

The official, speaking on customary condition of anonymity, added that the ministry’s worries about the budget cuts have eased with U.S. reassurances that sequestration will not affect the American presence in South Korea.

In a statement Friday, USFK said the impact of sequestration on its military operations remain undetermined, but its top priority is ensuring that its troops are properly equipped and ready.