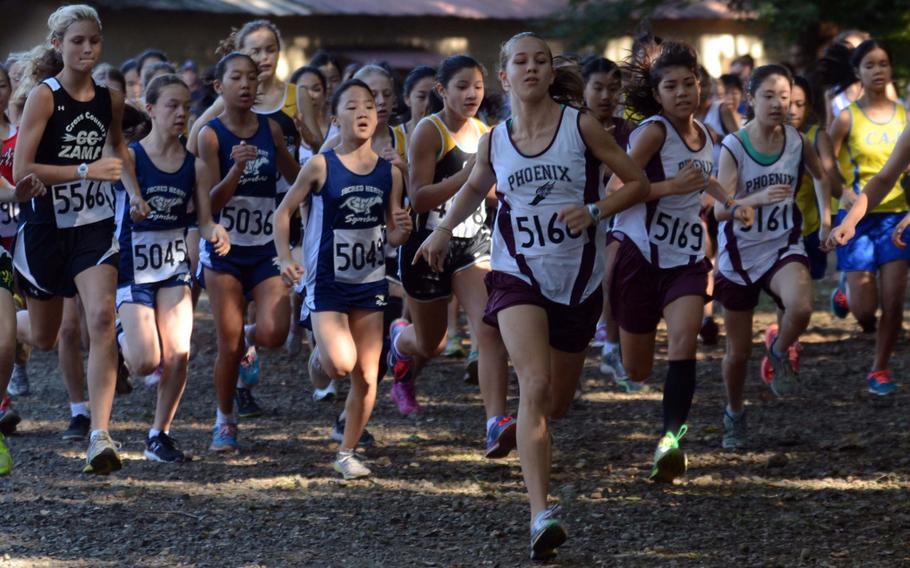 Seisen International School eighth-grader Brittani Shappell seizes the early edge ahead of the pack just after the start of Saturday's Kanto Plain Association of Secondary Schools cross-country finals middle-school at Tama Hills Recreation Center, Tokyo in November. Although non-DODEA middle-school runners like Shappell will still be able to compete in varsity events, DODEA athletes are out of the running. (Dave Ornauer/Stars and Stripes)

YOKOTA AIR BASE, Japan — Middle-school sports programs at Defense Department schools in the Pacific are the latest victims of defense budget cuts.

In an effort to cut costs, the Department of Defense Education Activity announced this week that it will strictly enforce a prohibition on middle-schoolers representing their schools in competitive sports, such as cross-country, track, golf, tennis and wrestling.

Some schools had, for many years, allowed middle-school students to travel to high-school competitions and participate in “exhibition” events. For example, an eighth-grader could take part in a cross-country event with the high-school team, but his/her times would not count in the actual competition.

However, DODEA’s financial woes — part of the larger Defense Department sequestration — have forced drastic cuts to high-school sports this year, and that means the end of middle-school sports, according to officials.

“Our athletic budget has been reduced and that has created angst for some folks,” DODEA Japan District superintendent Lois Rapp told about 50 concerned parents during a meeting at Yokota Middle School on Tuesday night.

Travel for sports has become more expensive, Rapp told the parents; it cost $25,000 to fly a school cross-country team from Sasebo to Misawa for a recent meet for example, she said.

DODEA athletic directors worldwide have been ordered to bring schools back in line with regulations that prohibit middle-school sports teams and students traveling for athletic competition, Rapp said.

But, it doesn’t mean the end of middle-school sports altogether, Rapp said.

“There is no intent to have no athletic opportunities at the middle schools,” she told the parents.

Instead of competing against other schools, students will be allowed to participate in sport only with students from their own school, she said.

“Athletics are not funded for DODEA until high-school level, other than for intramural purposes,” she said. “You can have a Yokota track club but not a track team.”

In that respect, DODEA is different from most stateside school districts, where students can begin participating in many school-sponsored sports starting in the sixth grade.

But Rapp said officials are looking at the potential for schools to partner with on-base youth sports organizations. Those organizations, such as the Army’s Child, Youth and School Service, historically have picked up the slack for athletes who have yet to enter high school.

Rapp explained to parents Tuesday that the decision wasn’t made lightly.

“This isn’t something we have pulled out of the sky and decided we are going to be mean and now you can’t have a team anymore,” she said. “We are going to follow the regulation, but we are going to look for ways to support any child in these activities.”

Parents at the Yokota meeting didn’t appear pleased; one audience member who traveled from Yokosuka Naval Base described the decision to shut down the middle-school track team, built up to 80 members after 10 years, as “heartbreaking.”

David Belt, whose daughter, Virginia, 13, has run track and cross-country for Yokota Middle School for three years, said parents are disappointed the decision came just before the start of track season next month.

About 50 children are involved in cross-country with more than 60 running track for the middle school, he said.

The school participates in about 15 cross-country and track meets each year against international and Japanese schools. Team uniforms are funded by the PTA and the only cost to DODEA is transport, provided on a space-available basis on buses used by high-school athletes, he said.

There’s a concern that other activities, such as school bands, could be next on the chopping block, Belt said.

Parents hope DODEA will suspend enforcement of the regulation, at least until the 2014-2015 school year, he said.

“There were six girls on the cross-country team last season,” she said. “How is that going to be competitive?”

In Europe, DODDS-Europe athletic director Karen Seadore said middle-school students in individual sports such as track and field and tennis are allowed to practice with the high-school team and compete at home events on an exhibition basis, with their results not included in team totals. Middle-schoolers can’t travel or compete at road events. That’s a change from last season, when middle-school athletes could travel and compete in individual sports, if space allowed.

Duane Werner, principal of Naples Middle/High School in Italy, said he’d prefer to keep taking middle-school students when space is available, but he believes DODEA had to draw a line out of fairness, because team sizes and travel arrangements vary.

He said he has heard some concern from parents of middle-schoolers on the cross-country team.

Those students can still show up to home competitions, Werner said, but they now compete against teammates. That’s what middle-school students did in a recent wrestling match in Aviano, he said, and it’s what they did during a cross-country meet in Naples last year.

“They still ran, but it essentially became a Naples Middle School race,” he said.

Stars and Stripes reporters Steven Beardsley and Gregory Broome contributed to this report.