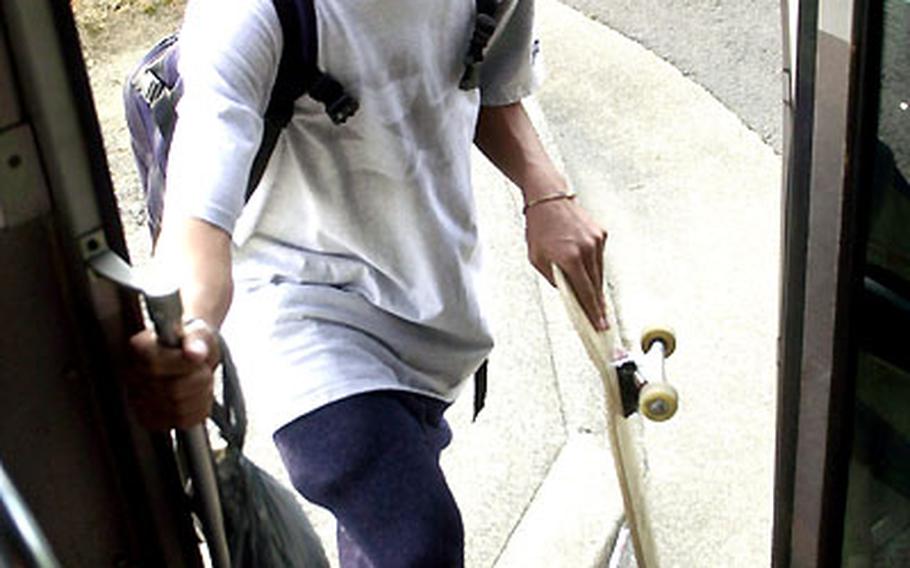 SASEBO NAVAL BASE, Japan &#8212; A stinging round of Transportation Department budget cuts has left Main Base and Hario Housing Village residents unable to rely on base bus transportation to the extent they could just a few weeks ago.

A decrease in the number of Main Base shuttle route runs, and the elimination of a Hario stop by the Fukuoka Airport shuttle, occurred in early October when the department&#8217;s funds for this fiscal year suffered a 25 percent slash, said Master Chief Petty Officer William G. McKenzie, Sasebo&#8217;s transportation officer.

He said there was no other way to cut costs while maintaining the quality of service to which Command, Fleet Activities, Sasebo &#8212; the base&#8217;s command organization &#8212; is accustomed. The total budget for the fiscal year is $225,000, McKenzie noted.

&#8220;When I first heard about the budget cuts, I had already decided the Main Base shuttle would stop running,&#8221; he said. &#8220;However, when Yokosuka heard about this plan, they offered us enough money to keep the shuttle running, but at a minimum level.&#8221;

In addition to the costs of maintaining the base&#8217;s government-owned vehicles, the Main Base shuttle operation gobbled up about $95,000 last year, noted McKenzie. The Fukuoka Airport shuttle service&#8217;s stops in Hario lopped about $45,000 out of the budget.

&#8220;What I did was study the records kept by the drivers of the shuttles last year, and I was able to determine which Main Base shuttle routes were being used by the largest number of riders,&#8221; he said.

Before the budget reduction, the Main Base shuttle service operated 10 rounds per day stopping at such locations as the two Main Base gates, base Headquarters, Bachelor Enlisted and Bachelor Officer housing facilities, the galley, Ernest J. King School, USO Fleet Landing, McDonald&#8217;s near the piers and India Basin, where ships are moored while in port.

&#8220;After studying the patterns of use of the Main Base shuttle, we cut the number of the routes each day by six,&#8221; McKenzie said.

The base&#8217;s Fukuoka Airport bus trips still operate twice daily; they just don&#8217;t stop at Hario either coming or going. Prospective riders must find a way &#8212; by taxi, public bus or via an automobile ride &#8212; to the shuttle and from the Main Base to Hario upon their return.

James Nater, 15, said he&#8217;s pleased the shuttles still run, when he must carry a backpack full of thick textbooks and school supplies &#8212; not to mention his prized skateboard.

Nater, a Hario Housing Village dependent who lives with his stepfather, Petty Officer 1st Class Tim Leitzke, and mother Elsie, said the bus schedule changes would likely cause a disruption in the summer when he and friends would ride the shuttle &#8220;10 times a day, all going from one place to another.&#8221;

Complete shuttle bus schedules are available around the base in printed form, as well as on the signs at each bus stop. For more information from the Transportation Department about the schedule changes, call DSN 252-3326.