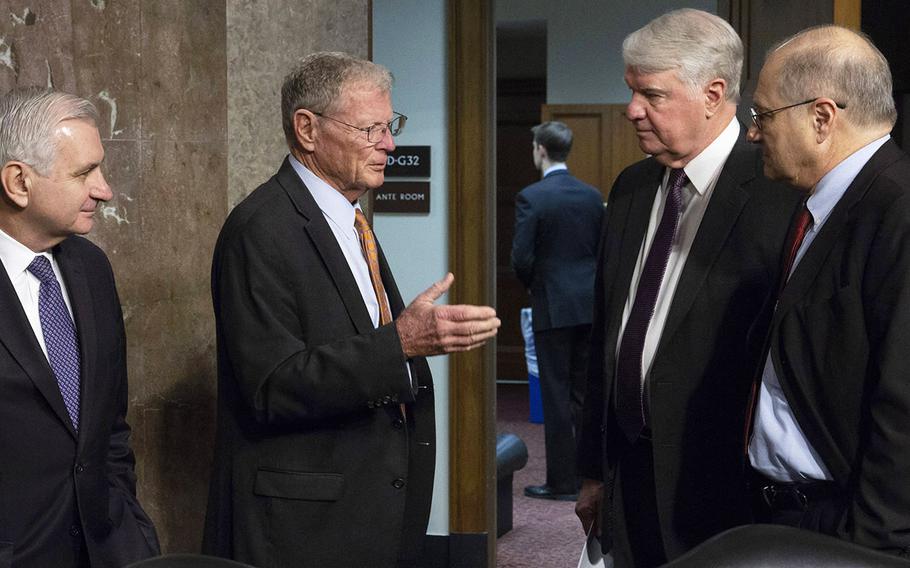 Buy Photo
Retired Navy Adm. Gary Roughead, co-chair of the Commission on the National Defense Strategy, testifies at a Senate Armed Services Committee hearing on the commission's findings, Nov. 27, 2018 on Capitol Hill. Next to him is the other co-chairman, Ambassador Eric S. Edelman. ( Joe Gromelski/Stars and Stripes)

WASHINGTON – The Pentagon, which is facing potential spending cuts next year, could see U.S. armed forces suffer and a possible national security crisis if the military’s budget is slashed, officials and lawmakers warned Tuesday.

The concerns were highlighted during a Senate Armed Services Committee hearing focusing on a report issued by the National Defense Strategy Commission earlier this month.

The commission, which is directed by Congress to weigh the National Defense Strategy against global threats, has said an inadequately resourced military could struggle to win, or even risk losing, a confrontation with major powers such as China or Russia. Major powers competition is a central theme of the National Defense Strategy issued in January.

“The point that the report makes is that $733 billion for the next fiscal year should be considered a floor and that we should probably be more than that,” Sen. Tom Cotton, R-Ark., said during questioning of the commission’s co-chairmen during Tuesday’s hearing. “But what is especially alarming is… the administration may be considering cutting 5 percent from the Department of Defense all the way to $700 billion.”

In October, President Donald Trump surprised Pentagon officials with new plans to bring defense spending for the 2020 fiscal year to $700 billion, which is a 4.5 percent cut from a $733 billion plan that his administration previously proposed. The comments were part of a Trump meeting in October with cabinet secretaries who were asked to cut 5 percent in spending.

Pentagon officials have since said they will roll out two proposed budgets for 2020 in the coming months, one for $700 billion and another for $733 billion. Experts have said a $700 billion budget would undo many of the military gains made in the last two years.

While the 2018 and 2019 fiscal year "budgets moved us in the right direction, there is now a prospect, however, that we will be moving in the wrong direction,” testified Eric Edelman, co-chairman of National Defense Strategy Commission and a former U.S. ambassador.

There’s a misconception that increased defense funding in the 2018 and 2019 fiscal years has solved all the military’s problems, said retired Adm. Gary Roughead, the other co-chairman of National Defense Strategy Commission.

“There’s a sense that the last two years of growth have fixed the problems,” Roughead testified. “Nothing could be further from the truth, whether it’s in readiness, whether it’s in conventional modernization or nuclear modernization. But I think that’s kind of feeding this idea that it’s time to taper down.”

In February, congressional lawmakers reached a two-year spending deal to lift defense budget caps to $700 billion for fiscal year 2018 and $716 billion for 2019. In August, the 2019 National Defense Authorization Act, or NDAA, which provides direction for the $716 billion budget, was passed, followed by an appropriations measure to provide the funds.

“Those last two years have been a down payment” to reverse spending cuts and address readiness and modernization failures, Cotton said.

Sen. Jim Inhofe, R-Okla., chairman of the Senate Armed Services Committee, said Trump’s original $733 billion proposal for the 2020 fiscal year was only a 2.3 percent increase from spending a year earlier, “which is below inflation.”

Inhofe said he was especially alarmed at the report’s assessment that the United States is very near the point of “strategic insolvency.”

The commission’s report “makes clear that our nation confronts stark choices,” Inhofe said in recounting highlights from the report. “We got ourselves in this mess and we got to get ourselves out of this mess.”

When a new slate of lawmakers return for a new congressional session in January, they will need to address spending caps that are slated to return in 2020 under the Budget Control Act.

The Budget Control Act of 2011 installed spending limits for defense and non-defense spending until 2021. Though lawmakers lifted those spending caps for 2018 and 2019, defense spending will be limited to $576 billion for the 2020 fiscal year if no action is taken.

And if no deal is reached to lift the caps, it raises the threat of sequestration – automatic, across-the-board budget cuts.

“It is the duty of this committee to ensure the men and women we send into harm’s way have the resources necessary to complete their mission and return home safely,” said Rhode Island Sen. Jack Reed, ranking Democrat for the Armed Services Committee.

Concerns about the return of the Budget Control Act’s fiscal constraints were also the subject of an afternoon Senate Armed Services Committee subpanel hearing on the Navy’s 30-year plan to expand to a 355-ship fleet.

“According to statue, we are supposed to revert back to the BCA caps,” Sen. Roger Wicker, R-Miss., chairman of the Armed Services’ seapower subcommittee, said during his panel’s hearing Tuesday. “I view that as unthinkable and would view that as irresponsible on behalf of this Congress.”

For now, the Navy is on track to reach 327 ships by fiscal year 2023 and 355 ships by 2034, testified James Geurts, assistant secretary of the Navy for research, development and acquisition.

However, the shipbuilding plans could come to a dramatic halt if the budget caps aren’t lifted next year, warned Vice Adm. William Merz, the Navy’s deputy chief of naval operations for warfare systems.

“As far as the BCA, there would be immediate impact,” he said. And “depending on how it lasts, I think we can go from immediate to a devastating impact on the program.”